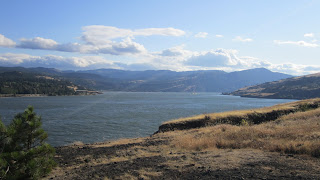 Occasionally I need to travel for work.  This week is such an occasion.   So where had work sent the bear this week?

All afternoon I was sitting in a conference room in our office, looking out the windows, and taking in wonderful views of the gorge.  It beckoned me.  It called to me with its siren songs... explore me... cache me... dude, seriously, get it in gear! 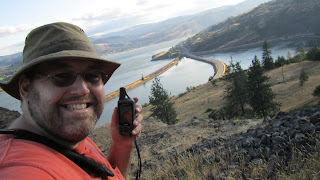 So what is a cacher to do?  I am glad you asked.  As soon as I got off work I grabbed my gear and hit the trails.  Destination:  Catherine Creek.

Catherine Creek is on the Washington side, and has two separate areas:  A one mile paved trail that winds through the lower parts close to the Columbia river (close being approximate as it is still 50ft above the water), and a much more rugged section that has dirt and stone pathways that snaked through the tall hills that make up the gorge.  I started by walking the paved path, and grabbed 3 caches.  The views of the river were astounding.
Once I did the paved pathway I decided to see if I could get a cache on the rugged trails going up the hills. So I put a cache in the GPS and started the climb up.  The trail was a dirt path with a lot of loose stone strewn all over.  The landscape of the gorge is different than I am used to.  In the east most rock is solid granite. In the gorge it tends to be piles of smaller rocks.   It gives the area the feeling that its older and more worn. 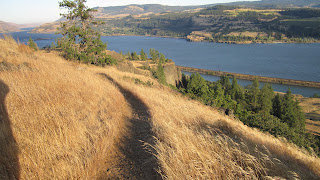 After I found the first cache I decided to go for another one further up the trail.   The name of the next cache was Canadian American Trading Association.  Being a Canadian in America I figured I had to find that cache.  Pretty soon I was billy goating up some steep trails (don't worry, its not *that* bad - geriatric billy goating at best).

Before I knew it I was 3 caches (all ammo cans too!), a mile down the trail, walking a ridgeline, and the sun was starting to set.  I decided to head back before dark set in.  The terrain is very navigable in the light, but all the small rocks strewn about would make hiking them at night difficult at best.

On the way back I decided to take a detour for one last cache that overlooked an interesting rock formation, so once more I billy goated up some steep, rocky trails and pathways to get a view of this --> 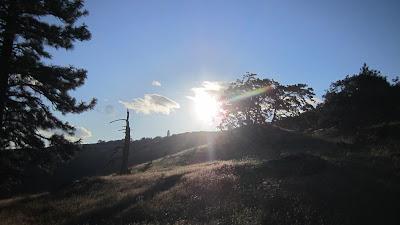 After that I headed back down the trails to the car before the sun went down completely. It was a great hike.

There are more trails in the area, and more caches.  I may have to come back here before I head home again.  But if not at least I have excellent memories of that one time I cached Catherine Creek overlooking the Columbia River Gorge on an amazingly beautiful cool summers day.... outstanding.
Posted by Dave DeBaeremaeker at 1:32 AM


so how many caches was it total for you that day?

no wonder you were not online when I was getting ready for bed.

Dude, you are so lucky! When I travel on business it's a pre-conference early, breakfast meeting, board meetings all day, luncheon speaker/meeting, committee meetings all afternoon, 30 minutes to wash up and regroup to network with dinner and by the time that's done, I'm done! Any openings over there at Google?
Great post and pics Dave!