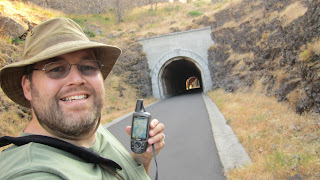 As you may recall I have travelled to the Columbia River Gorge in Oregon for work.

During the day I am working for the man.  In the evenings I am spending my time exploring the amazing natural beauty of the gorge, and finding some geocaches.

This evenings adventure was to explore the Mosier Tunnels.  They are part of the Columbia River Highway, which was build between 1913 - 1922, and in service until 1954 when the nearby Interstate 84 highway was built.  These tunnels were then filled in with rock and stone for safety reasons.  In 1998 the tunnels were cleared out, and the old highway between Hood River and Mosier was turned into a paved walking and biking path. 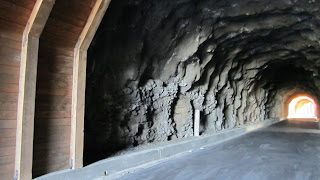 The trail is also host to several caches, some of which have a very high terrain rating.   I parked at the Mosier end of the trail and hiked a couple miles down the trail.  The first cache is actually on top of the tunnels, but to get there I would have had to climb a sheer rock wall, which I determined upon inspection, was beyond my abilities.  After admiring the tunnel I moved on to the next cache.  With caching, as with many other things in life, it is important to know your limits.

The next cache was a difficulty of 4, terrain of 4 (ratings go from 1-5).  I normally limit myself to terrains of 3, so this was going to be a stretch for me.  When I got closer to GZ it quickly became apparent that I would need to climb up a steep rock pile.  It would be tough, but I figured I could do it, because with caching, as with many other things in life, it is important to keep challenging yourself. 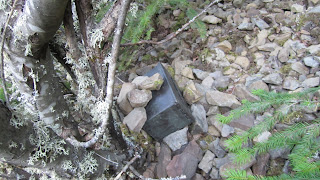 So I started clambering and billy goating myself up 50 or so feet of a loosely packed rock pile.  It was a struggle, but I finally managed to get to the top, and saw the sweet, sweet sight of...

... the cache. After signing the log I billy goated back down to the bottom of the pile, and with a rather proud feeling about myself, I kept moving down the trail.

I had time for one more cache, which was just a bit further down the the trail.  Then with the sun setting behind me I executed a retrograde maneuver and returned to my car, and drove back to the hotel. 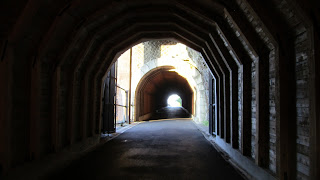 There are a couple more caches on the Hood River side of the trail that I did not have a chance to get this evening.  Hopefully I'll be able to snag them before going home.   This is one interesting trail.


Posted by Dave DeBaeremaeker at 2:01 AM