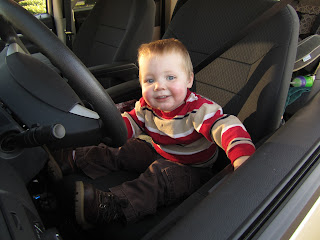 There are many great things about being a geocacher:  The thrill of the hunt, the adventure, exploration, being "in" on a secret... and sometimes it is the people.

Over the past few months I have been interacting with several geocachers from South Carolina on Google Plus.  They call their group the Band Of Cachers, or the BoC.

I found out that they were holding a 11-11-11 event, so I quickly made plans to attend.  Orignally I was going to go myself, but in the end the entire family made the 2 hour trek to Lancaster SC to attend the event.

If you have ever met anyone who you've previously only known online you know that it is always a little surreal.  To be in the presence of people who you know things about, but have not seen before takes some getting used to.  However they did an amazing job of making us feel welcome, and it soon felt like we were among friends.  The BoC are a great group of down to earth, decent folk with a great sense of humour.  We spent the evening basking in the warmth of southern hospitality and geocaching bonding. 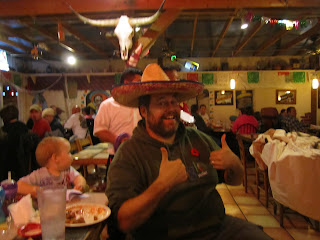 Along the way I was initiated into the BoC by wearing a sombrero and having Happy Birthday sung to me by the mexican staff (did I mention that the event was held at a mexican restaraunt - if not go back and mentally read that in to the third paragraph - I'll wait).

I hope to attend more events with these folks, and someday to go caching with them.

All good things must come to an end, and this was no exception, so after the event we put an exhausted (1.5 hours past his bedtime, yet still amazingly well behaved) Zekey in the van and headed to the hotel to get some rest.

The next morning we headed to Rock Hill SC to do some caching.  It was actually a more interesting caching day than I expected as Rock Hill has a refreshingly interesting mix of hides for being in an urban setting.  Some of the highlights are: 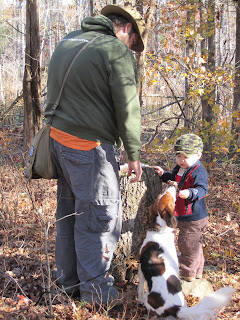 *  There was one cache that was hidden in a tree.  The hider encouraged people to leave their personal marks by hanging their personal tokens on the tree. Its kinda like a shoe tree, but with previous finders trademark items.

*  Zeke found his first cache.  He has cached with us many times, but this time he actually discovered and pulled the cache container from its hiding place.  We are still working on "putting it back, hidden as well or better than found" :)

* Due to certain logistical issues brought up by caching with pregnant ladies and the resulting tiny bladder syndrome, I got to cache solo with Zeke for a couple finds.  He enjoyed looking in the caches to see what trade items they contain, and wanted to trade for a plastic ruby necklace.  I was a bit worried about that (as you can imagine) but my concerns were allayed when he spent the rest of that particular walk dragging the necklace beside him, kicking up dirt.


Thanks to my wife's efforts we came away from the day with more pics of myself and Zeke caching than I have ever had before. So to end this post I leave you with a slideshow of the sights and sounds of our wonderful day of caching in Rock Hill SC

Posted by Dave DeBaeremaeker at 9:27 PM

Great article Dave. Your wife took some great pictures. Glad you all had a fun time with the BoC. Hope you do get to go caching with them sometime soon.

I really enjoyed this post. I like how Zeke is taking part in the caching experience now and the mental image of him dragging that necklace in the dirt made me laugh out loud. The photos of you and he are priceless. This family bonding is one of the things I love most about caching.

AWESOME! What a great post. We'll have to run this bad boy on CC.Com. Nice job and great pics! I love your blog!