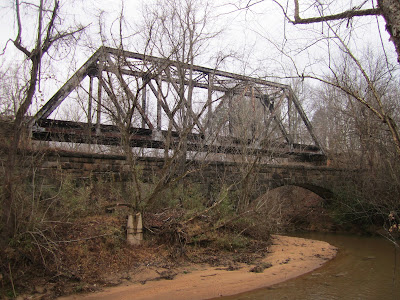 It is always interesting to explore places of historical interest in your own neighbourhood.

In this case the object of interest is the Huntington Creek Railroad Bridge in nearby Morganton NC.

This is actually a series of foot and rail bridges all running beside or underneath each other, some intact, some lying in ruins.  I estimate from the evidence that four bridges existed here at one time or another.

I cannot find a great deal of historical information, but what I can determine is that the oldest bridge here was built in the 1870s, and the youngest in the 1910s

There are only two bridges still standing: a metal truss bridge, and a stone arch bridge.  The stone bridge runs parallel to the truss bridge, but is about 15ft away, and 10ft lower.  Some of the support structures remain for the other two bridges, but not enough to know what they looked like. 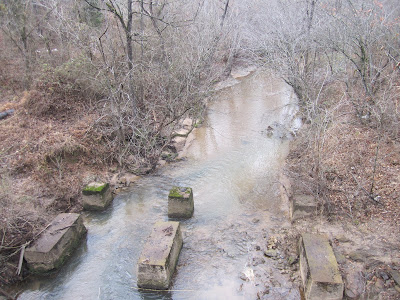 There is a geocache located at this bridge, and my goal is to get to the base of the bridges and locate the cache.

To get to GZ one needs to cross the creek. There are several approaches to the bridge available.  One can walk across the stone bridge, or  ford a rather wide creek.  I'll leave the obvious third option of hoping aboard a train off the table as my hobo days are not quite upon me yet.

I first chose the dry option and walked across the stone bridge.  It is a narrow bridge, perhaps 6ft wide, 100ft long.  I do not know what its intended purpose was but it seemed inadequate for a rail bridge, and there was no evidence of train tracks. 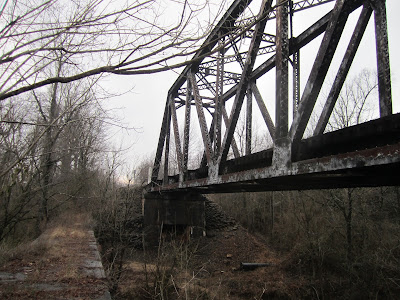 There is a second issue with the bridge... namely there is no way to get down to the lower level from the other side.  The bridge ends at the rail bed, which immediately drops off to a cliff.  Unless I start to channel Spiderman (and who wants to do that, really?) There is no way I can get down to ground level to start my hunt from here.

So I execute a retrograde maneuver and head back across the stone bridge and re-evaluate my options.

The creek is about 20ft wide, and a foot deep at its deepest.  I am wearing my hiking boots, and not really prepared for a creek fording.  Also it is quite cold, being the beginning of February.  This is North Carolina, but it still gets below freezing at night.

So with an inner-voice exclamation of "Meh, what the heck!", and "This will probably make a good blog post", I plunged (stepped gently) into the raging torrent (gently flowing) river (creek) and faced my death (mild yet chilly soaking of boots) in the name of exploration (yeah, exploration works).

A few long seconds later I was soggy but safely on the other side and began my trudge (when one has boots full of water one is left with few options but to trudge) to the base of the bridges.  It was at this point that I began my (ultimately fruitless) search for the cache. 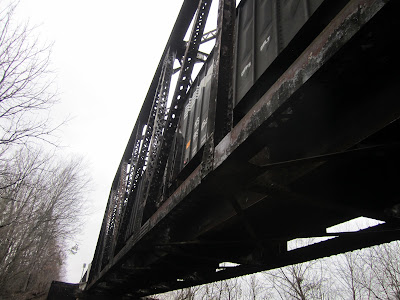 The cache description said that the truss bridge was "slightly used", so I was not expecting any traffic on the rails.  I say this to explain the high pitched girly scream that escaped from Yours Truly when a train went by directly overhead about 5 minutes into my search.

As a word of excuse, I was standing directly under the rails, which were 30ft above my head. and standing under the bridge supports so I didn't hear the train until it was literally above me.  I am not sure if you have ever stood directly underneath a moving train, but if you haven't, you are in for an interesting and noisy experience. 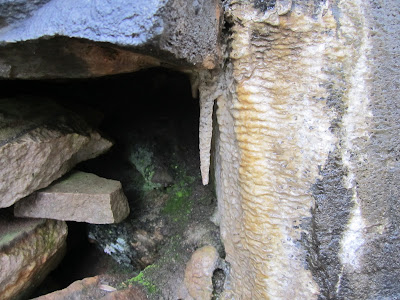 So after recovering from my sudden onset train induced mini heart attack, I kept searching for the next half hour or so.  As it turned out I didn't find the container, but I did fine some stalactites in the rock that is used as bridge supports.  This really underlines just how old these bridges are.  The one pictured was about 6 inches long.

Eventually I gave up the search, waded back across the creek, and tried to press the water from my boots before getting back into my van and drove on back home.

This cache proves that it is not just about the numbers for me.   I walked away without a smiley, but still had a great blog worthy adventure, and left with a smile on my face.  When it comes down to it, isn't that really the whole point? 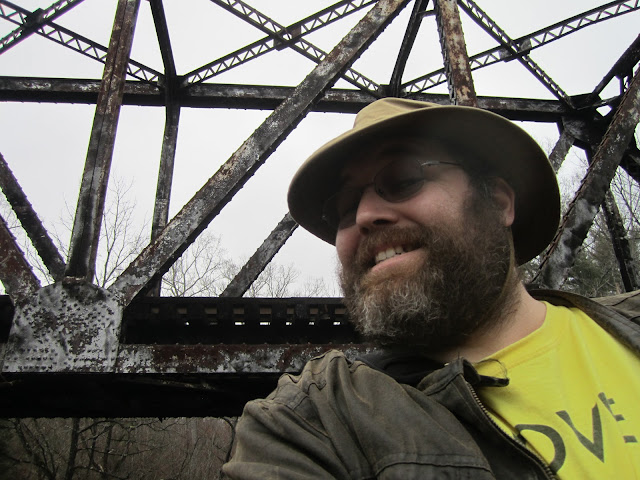 Its a good thing you weren't on that bridge when the train came thru. Looks like a great place to hide a cache and you're going to have to go back and try again. So many possible hiding places.

Sounds like an awesome adventure. Absolutely worth a smiley even if one wasn't 'earned' in the traditional sense. Certainly a DNF that calls for another visit. At least next time you know to come with rubber boots in hand. I guess on foot would be a little more fruitful but a much less plesent sounding idiom.

Very cool bridge! I love old structures and things like this. You won't find them all and Dave, I'm happy that you walked away happy with or without a Found Log. But, what will you do know? Email the CO? Get a hint? Will you return to claim your prize? I'm curious.