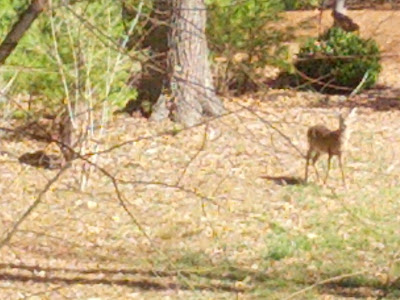 Yesterday after finding the North Carolina Delorme Challenge, we went on to find some more caches.

Due to certain circumstances involving toddlers and pregnant wives, I headed out to find a cache solo.  My wife parked on the side of the road, and I jumped out and headed into the woods.

I got 20 ft into the woods and thought to myself "Crap! I forgot my camera",

Then I saw the deer, and realized the magnitude of my mistake.

The deer was standing 50ft away from me.  After mentally kicking myself over the forgotten camera I remembered I had a camera on my phone.  I reached down, pulled it from its belt holster, and snapped some pics.  I then started back down my path, which was somewhat orthogonal to the deer.  I expected her to run away at any moment, but she just stood there and stared at me.  After a few feet I disappeared behind some foliage, and I saw her bend down to eat. 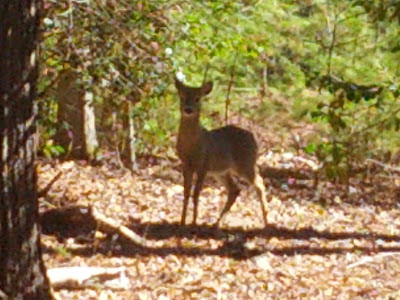 There were actually two deer, but one was obscured behind bushes the whole time.

I got to within 30ft of GZ, and had circled around to the other side of the deer.  It was then that I realized that the deer was standing on the cache.  Literally.

So I took some more pics with the phone, and the deer finally ran off.  I then went in and grabbed the cache and signed the log.

This was my first deer muggle.  How cool is that?

Posted by Dave DeBaeremaeker at 8:00 AM

HA HA you have to watch those deer muggles, they are crazy. Even worse are grey squirrel muggles. Those bad boys will chew right through an aluminum bison tube. I have seen it myself. Squirrels and raccoons are the two primary muggle critters in my area. They drive me nuts!

I love seeing deer in the wild like that. How come you always get a photo op when you forget your camera? That happens to me all the time.