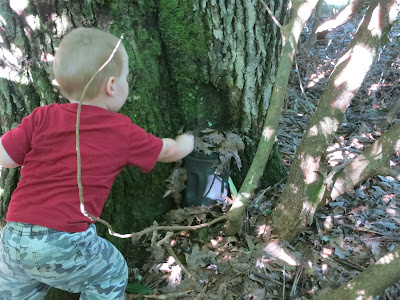 There are few places on earth that I like more than the Blue Ridge Mountains. This weekend I spent two half days exploring those very mountains.

The first time was Saturday Morning.  I took Zeke up with me, and we did some geocaching.

There is an age old (if anything in geocaching can be "age old") axiom that you never know what will happen when you go geocaching.  This is doubly true when you go caching with toddlers. 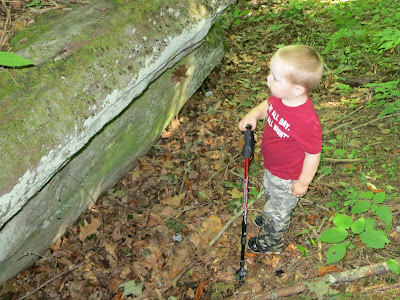 The first cache was at a rest stop along highway 221.  The cache was just a few hundred feet away from where we parked, so I just grabbed Zeke, handed him my spare GPSr, and headed towards GZ.

The cache was just inside the treeline, in a big rhododendron bush. As we pushed our way through the branches I commented to Zeke that we should have grabbed our walking sticks as they would have been useful to push back branches.

He enthusiastically agreed, and despite being 5ft from the cache,  he turned around on the spot and headed back to the car, completely determined to grab his walking stick.

I convinced him that we should probably stop and sign the log first. He reluctantly agreed, then he made a bee line for the car and retrieved his walking stick.

Successfully armed with his walking stick (and insisting I take mine) he started exploring the rest of the area, checking out every rock and stick, with the intensity that only a toddler can muster.  Exhausting all there was to see, we piled into the car and moved on down to the next cache. 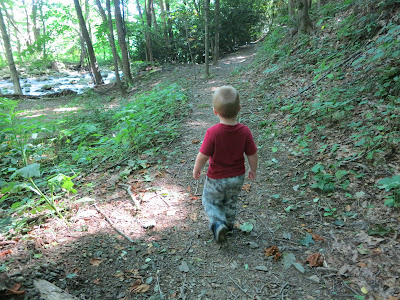 We had a 300 ft walk through a nicely mowed field before we got to GZ, which was tucked just inside the woods behind a bandstand.

Once we slipped behind the band stand,  I noticed the GPSr was pointing at some rocks.  I moved towards the rocks. I pointed at the rocks. I said "Zeke! the cache is in the rocks!" But alas, Zeke was not ready to rock.

Zeke was much more intent on the path that lead back deeper into the woods.  He kept going... and going... and going.  I figured I could live with an impromptu hike, and I want to foster a spirit of exploration in the boy, so I followed him down the trail.

It lead to a creek.  Zeke started tossing in stones.  So did I.  He then jumped into the water (he never could resist a puddle, and this was just a giant flowing one to him), and starting climbing over the rocks, completely soaking his shoes (but this rarely stops a cacher - he's training is well in hand). 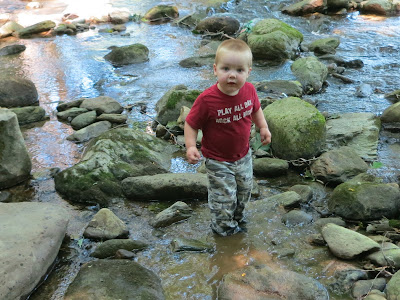 Eventually time was getting short and we had to head back, so I coaxed him out of the water with the promise of McDonalds for lunch, and we trudged back soggily to GZ.  We retrieved the cache, signed the log, traded for some swag, and headed home.

We had had a completely unexpected but completely awesome adventure together.

The next day after church I headed up the mountains to grab some more caches.  Most of these caches can be summed up by the description "Fun drive down windy mountain roads - amazing views!", so I will spare you the details.

The notable exception was a cache that is part of a series that highlights picturesque silos on mountain farms. 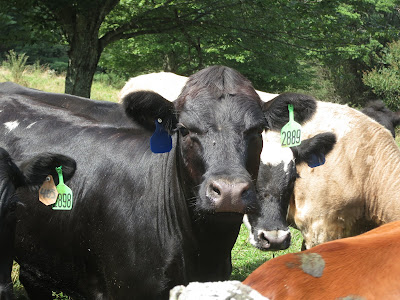 The cache was along a wooden fence.  The other side of the fence was a couple cows, just hanging out, chewing things, and being cows.  As I approached the fence one cow spotted me, and trotted over to check me out.  Her buddy soon joined us.

They stood just a foot away from me, and stared and huffed. Kinda like puppies (but way more delicious).  I got a little nervous until I remembered they are cows (I checked - udders all around), so they were probably fairly docile, and I had a wooden fence lined with barbed wire between me and them. I still refrained from making "steak" jokes  - it's not polite to remind food of how they will look on a grill.

I did some hunting for the cache, and when I looked back at the cows I noticed that the crowd had grown.  Pretty soon I had a whole herd of cows checking me out.  I never felt so popular while caching.
I figured the cache location's secret was safe with the cows, so I kept on hunting, and found the cache beside a fence post.

Finally I said good bye to my newfound caching herd, and moved on down the windy roads to some more majestic mountain views, peaceful waterfalls, and ammo cans.

I'll leave you with some more pictures from my day. 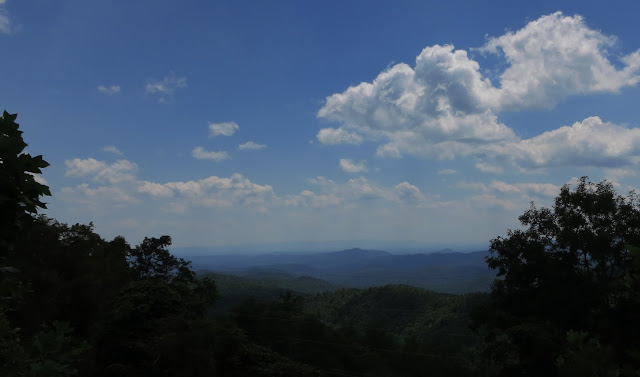 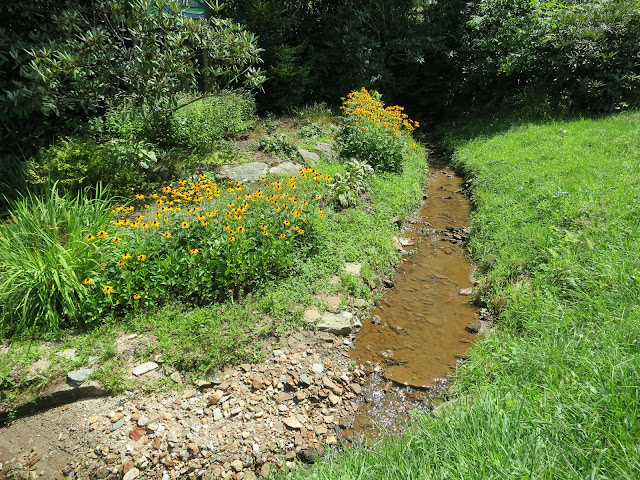 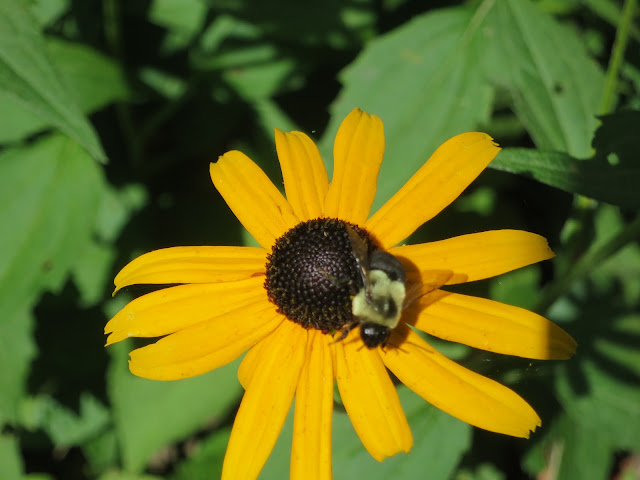 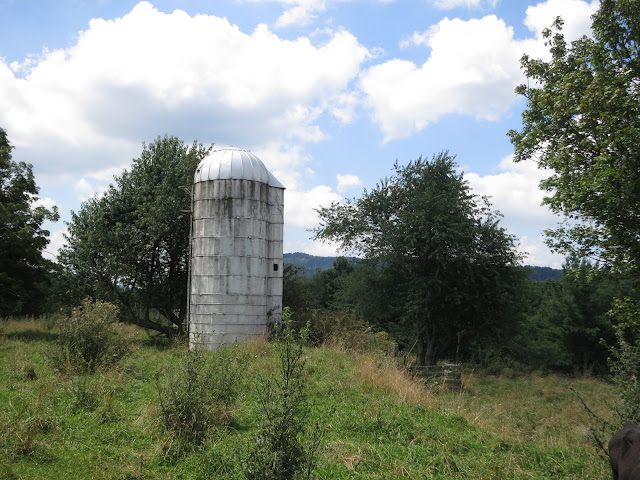 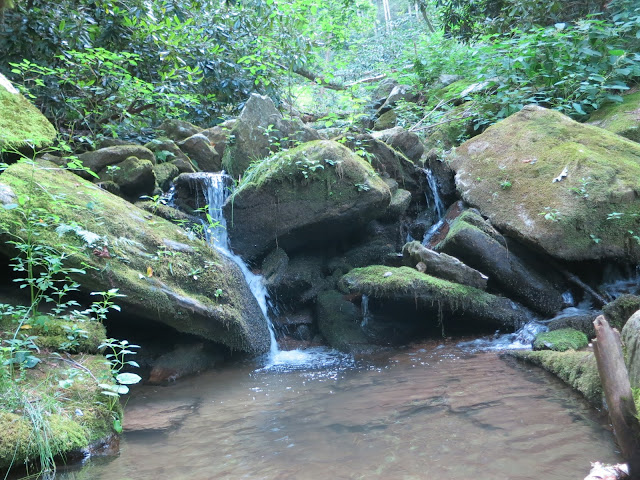 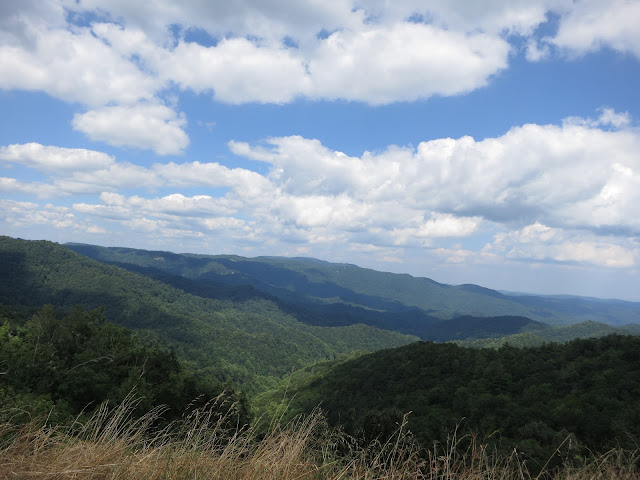 Posted by Dave DeBaeremaeker at 9:44 PM

How nice to spend some one on one time with Zeke. Your part of the country is beautiful!

What a nice adventure for Zeke.
Your mention of the cows reminded me of the day DH and I were out along a coutry lane/road geocaching, over a hedge were a herd of cows and like your cows one by one they popped their heads across the hedge to look at us lol. I think i counted 13 standing watching us as we passed by.
And it isn't the first time I have asked a horse in a field if they knew where the cache was as again it was watching us search. Just last week we were down visiting our older daughter and family in England, our 11 yr old granddaughter came into town to geocach With us, bless her she got the clue straight away when I read it out.

Zeke definitely sounds like he's quite an explorer. As a child, I grew up in front of some woods and I can remember how much I used to love to go and explore. Many times I'd be gone all day exploring that forest.

I love the pictures of the Blue Ridge Mountains and they remind me so much of North Georgia. The pics of the cows remind me of when my son and I were returning from our geocaching trip to the mountains (in mid-July). We departed from Blairesville in the early a.m for a long drive back home. While driving down out of the mountains at sunrise, we noticed what appeared to be a large heard of cows standing in the back of a pasture near some foothills. As it turns out, they weren't cattle, but a herd of deer! There must have been 25-30 of them! My only regret is that there wasn't enough light for me to get a picture of them with my camera.

Thanks for the great post and the pics that remind me just how much I love and miss the mountains.

Ya know what's really cool? I've been following you for just over one year and it amazes me how quick your little guy is growing up! In this post he has clearly transitioned from refrigerator magnets to outdoor adventures with Dad. Don't think for a moment he wont remember these days as he form his image of his pops. And that image will be an awesome one!
You are a role model and a darn good one at that brother!

And, when did you get so artsy with a camera? These are really great pictures obviously not your camera phone! Nice job!