Take Me To Your Leader: The Race Begins 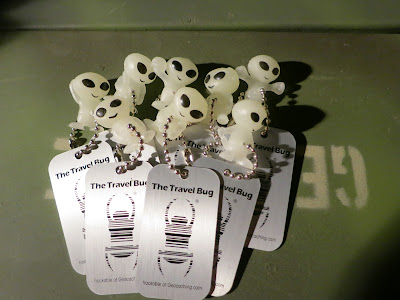 If you are not familiar with the concept, a travel bug (TB) is an object that has a unique tracking code.  The bugs are moved from geocache to geocache by cachers, and their movements can be tracked various websites, in this case geocaching.com.  Some bugs have missions attached to them, normally to get to a specific location. Others are released to travel the world at the discretion of the cachers that find them.

These bugs have a very specific mission: to return to me by being placed in a cache near my town as quickly as possible.  The exact mission reads as follows:

Your mission, should you choose to accept it, is to move this travel bug on the shortest route possible to get to Lenoir North Carolina.Just a short time ago, in a Galaxy close to home, on a small moon orbiting a small red planet in the Alpha Centauri star system,  monitoring stations began to pick up radio signals from a small blue planet in the western spiral arm of the Milky Way galaxy. Specifically the signals were from Golden Oldies 102.4FM out of Whichita Kansas.  After listening for several years, a group of 8 aliens had heard enough and decided to take action. They loaded a small Orion class star ship with as many cans of Floovian Blue Juice (their most favourite drink - and also used to tune their radios) that would fit in the cargo hold, and blasted off their home moon in search of this little blue planet, and the radio station therein.  Their mission:  to get the station to play "just a little more Lynyrd Skynyrd" because they play " a little too much Menudo".When they bumped into the Horse Head Nebula, a heat tile was knocked off the ship.  Just as they entered the atmosphere, disaster struck.  The cargo bay doors burst open in the heat.  The entire supply of Floovian Blue Juice was blown out of the ship and burned up in the atmosphere.   The aliens took to the escape pods, and were soon scattered across the planet.  The ship crashed near Lenoir, a small town in western North Carolina.Stranded on a foreign planet, and the only bottle of Floovian Blue Juice being an emergency supply squirreled away in the captains quarters on the crashed ship, each alien is now locked in a race to the juice.  The first one back will get to get enjoy the last bottle of Floovian Blue Juice, and tune into "a little more Lynyrd Skynyrd" on 102.4FM out of Kansas City. The rest will be cursed to drinking water, and trying to recall the memory of "a little too much Menudo".Speed, as you can imagine, is of the utmost importance.

The race works like this: I have mailed via the United States Postal Service, 8 identical travel bugs to cachers in 5 countries on 3 continents.  They have agreed to release the travel bugs in a cache near them.  Each travel bug is a 1" glow in the dark alien attached to a TB dog tag that contains the tracking code.

Due to the asynchronous nature of the release (i.e. the TBs will not be released on the same day), the "winner" will be determined by the shortest number of days between the time the TB is logged into its first cache, and the time it gets logged into a cache in Lenoir.

None of the TBs have been placed in caches yet - they are still in the mail at the time of this writing, but  expect that to happen over the course of the next two weeks. The progress of the race can be tracked here: http://debaere.blogspot.com/p/take-me-to-your-leader.html.

It should (hopefully) prove interesting to see how these travel bugs move from cache to cache as they work their way back to me. Stay tuned for updates. 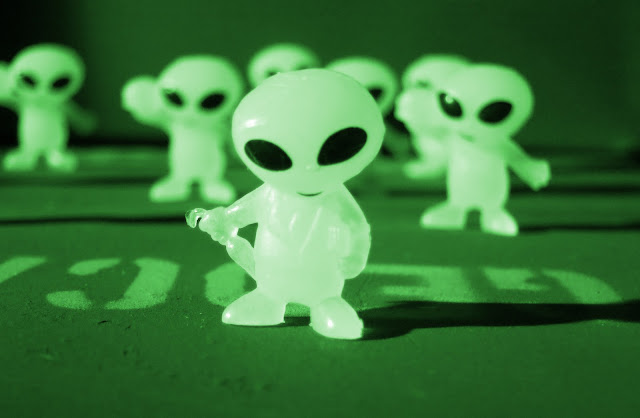 Posted by Dave DeBaeremaeker at 3:58 PM

I love this idea! And what awesome pictures!
Very cool!!!!

Good luck. I hope one travels in my direction so I can pick it up and move it along for you. Fun idea!

Good luck - I'm about to try something similar, but with 5 tags sent to the US and Australia to return to the UK. I'll watch your progress with interest!

Hope I get to see one of your tags!