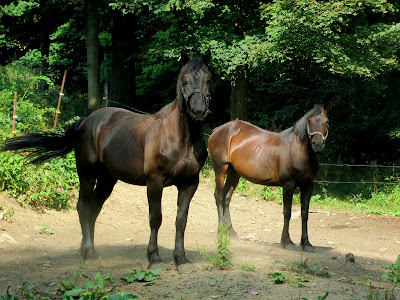 I had a wonderful caching experience last week while on my way home from my recent vacation in Canada.

Like most good things in life (that don't happen in Canada) it occured in Pennsylvania.

And, like most good adventures, it started with a horse.

We were on a drive south, still excited that we managed to cross the border without a lot of hassle (I have a work visa and a new passport - the time it takes to get properly stamped can take a while at the border - this time they were nice and quick), so we decided to grab some highly favourited caches along the way, as we had some extra time to kill. One of the caches promised a rock wall in the woods, and this intrigued me, so I put it on my list of "must do" caches. 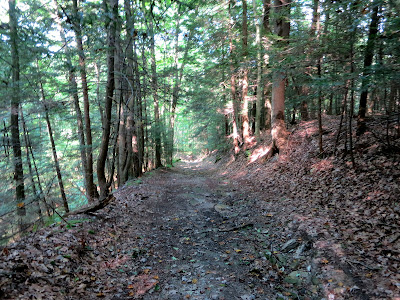 The kids fell asleep during the drive so when we pulled up to parking I jumped out and headed off on my own - my wife pulled babysitting duties.

I was facing an old dirt road.  I started walking down when I heard a horse whinny.  I look over and the most beautiful horse was staring at me from a nearby pasture. He looked at me, as if to say "I'm watching you - watch your back."

Amused I kept going down the road.  Soon the road became a rough trail.  Eventually I came to a fork in the trail.  I followed the GPS to the right and headed off into the woods.

I hopped over a small creek, and came to another fork. I took a left, and hiked up a small forest path up a steep hill.  When I got to the summit I got my first view of the wall.  It was off in the woods stretching far off into the distance. 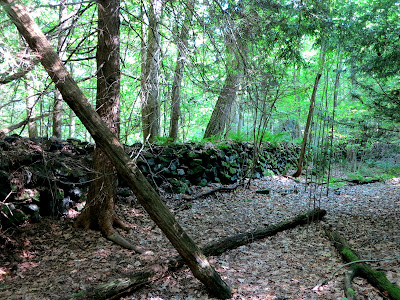 I have no idea why this stone wall is here. It is very substantial for being just a property boundary marker, but being in the woods with nothing around, nothing else makes sense to me.

I set about locating the cache.  The cache description says it is in the wall by a tree near the north end.  There were a couple likely options so I headed towards the closest one, which is about 100ft down the near side of the wall.. A quick hunt later and it is confirmed - wrong tree. Fiddlesticks.

I backtrack to the end of the wall, switch to the other side, and walk down 100ft to the next likely location.  A quick search later and bingo! I had the cache in hand.  A 50cal ammo can (note: all caches should be ammo cans).  The cache was indeed under some rocks in the wall, just as the cache description said.  It felt very "closing scenes of Shawshank Redemption" (ya know the one where Morgan Freeman finds the container at the end of the rock wall?), except it lacked the Morgan Freeman narration. 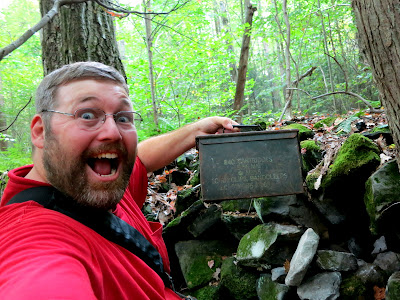 All of life should include narration by Morgan Freeman.

After signing the log I noticed something at the bottom of the ammo can - a piece of wood.  I popped it up, and it was coordinates to a mystery cache.  Intriguing.  The coordinates were for a point 4 miles away, and the cache description said the "bonus cache" was missing, so I decided to skip that part - shame tho - would have made this cache epic.

I put everything back and started down the trail back to the car.  As I approached the car I was greeted by a pair of horses.  The horse that whinny'd at me from afar had come down the hill to the fence with his friend to check me out.  I walked over, talked to him for a bit (what, you don't talk to horses?) and took some pics, before finally making it back to the car.

So there you have it. This cache has everything: walk in the woods, very interesting sights along the way, an ammo can, and something I would never discover if left to my own devices.  Gotta love adventures like this.

I'll leave you with some more pics form this cache run. 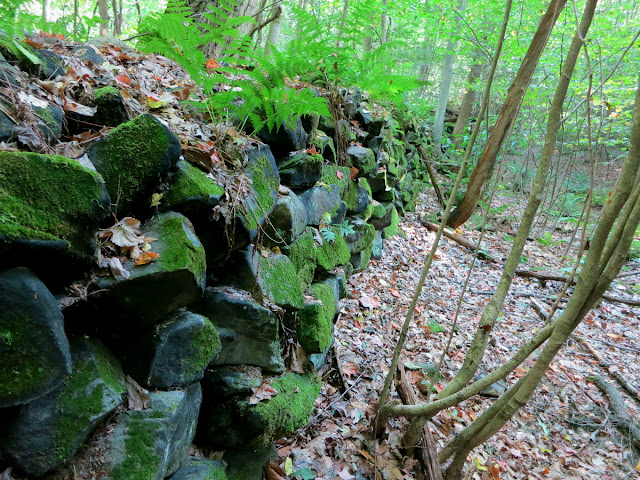 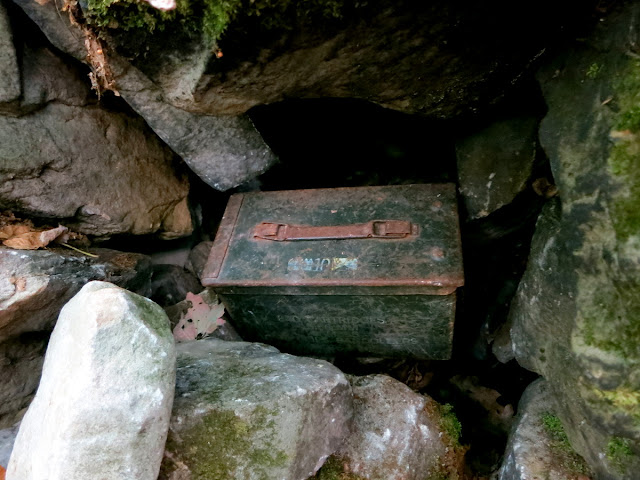 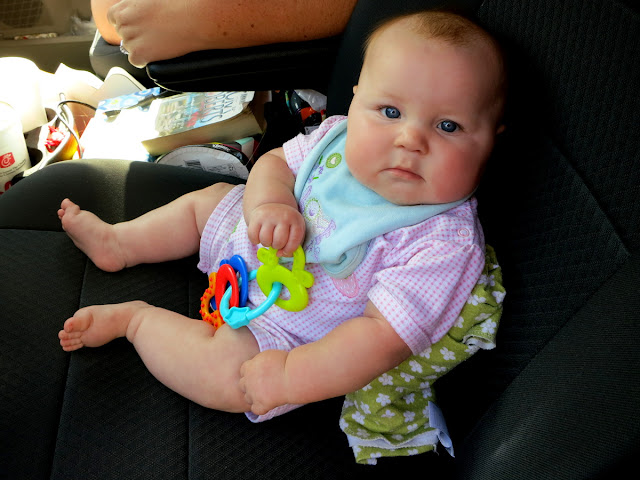 Posted by Dave DeBaeremaeker at 9:23 PM

Email ThisBlogThis!Share to TwitterShare to FacebookShare to Pinterest
Labels: Abigail, Geocaching, Yours Truly

also- abby has keys and is sitting in the drivers seat