Note: This post contains an old story from April 2010. I was reminded of it while reading my Google Plus stream and coming across a post from the 4x4 Podcast, and a contest they are running. After I wrote a version of this story for the contest I decided to go see if I had any pictures from the event. Turns out I did, and it reminded me that I a) got some details wrong for the contest story, and b) it would make a good story for this blog. So go check out that contest, then come back and read this story, which begins thusly: 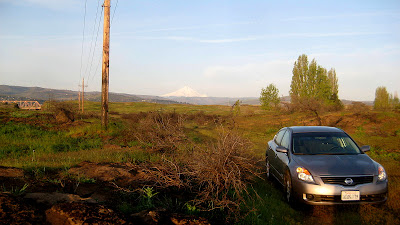 I was in northern Oregon on business in late April 2010. Waking up early one morning, and jonesing for adventure, I decided to take a drive on a large loop from The Dalles to the base of Mt. Hood, over to Hood River, and back to my hotel in The Dalles.  Google Maps says it should take about an hour to drive.  geocaching.com says there are several geocaches along the route.

I love it when a plan comes together.

So my misson for the morning became clear:  Geocaching and mountains while the sun rises.  Sounds like a perfect morning so I jumped into my rental car, a Nissan Altima Hybrid, grab some breakfast at a drive-thru, and hid the roads.

Given that it is late April, there was no snow on the ground where I was staying.  About 20 minutes into my drive I was started to gain some elevation as I entered a remote area, the Mt. Hood National Forest.  I started seeing some snow on the ground, but thought nothing of it.

I had grabbed a couple caches at this point, and was anxious to get to some more, so when I saw that the road ahead of me was snow covered, I didn't think a great deal of it.  It was a large patch, about 3-4" deep, and a 10th of a mile long.  I could see dry pavement on the other side.  It looked navigable, so I drove across it slowly, and got to the other side without incident.

A half mile down the road I ran into another snow patch.  This one was deeper, longer, and nasty looking.  In the interest of safety I decide to abort my drive, turn around, and head back to civilization. 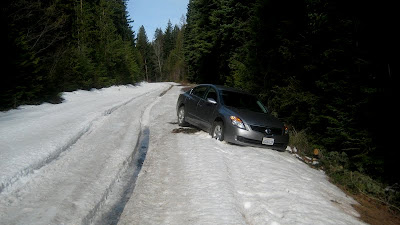 When I returned to the first snow patch I noticed that there were ruts carved into the snow from car tires that had passed by previously. The ruts looked too deep for the tires, so I decided to drive beside the ruts to avoid scraping up the underside of the rental.

I got about half way across the snow patch when the car developed a mind of its own and slid sideways into the ditch.  Nothing overly serious, but  after a few attempts at freeing the car,  it was clear that  I was going to be staying a while.

Clearly this situation called for a tow truck, so I pull out my trusty cell phone and dialed... well.. nothing.  I had no signal.  All I had was a nice message on the screen saying "Emergency Calls Only", and no bars, no data.  Nothing.

I didn't feel it was right to call 911 as I was not in danger, and I didn't consider this an emergency. Besides all that I had no signal so it seemed unlikely to be able to call 911 anyway.  I tried to hike a ways down the road to see if I could get better signal, but after a while that seemed to be a fools errand.  Finally relenting, I dial 911 and was shocked to find it actually work. I apologized to the nice lady who answered for making a non-emergency call, and explained my situation.  The nice lady asked for my location, and being a geocacher I had my exact coordinates ready and waiting.  She told me she would call a tow truck, and to call back in 20 minutes to get an ETA. 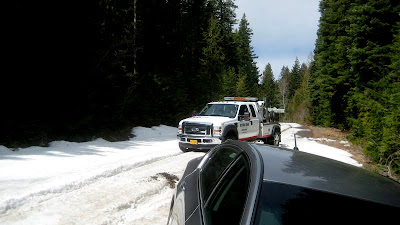 So 20 minutes later I call 911 back and I am informed that a tow truck had indeed been dispatched, and it would take about 90 minutes to arrive.  I settle in, turn on the car radio, and start to wait.

About 10 minutes later a car drives down the road towards me from the direction of (annoyingly) the snow patch I had decided I couldn't navigate. They seemed to have no trouble with it tho.  They took the ruts I had avoided, and pulled safely up behind me... only they couldn't get passed me... and they couldn't back up.  They had joined the ranks of the damned.  It was nice to have company.

After explaining the situation, and that I had already called a tow truck, we all settled in to wait for the inevitable rescue.  The new car was driven by a local lady and an Australian couple on vacation were in the back seat.  So while we waited we swapped stories and had a pretty good time all things considered. It was very international, and full of relative good cheer and merriment. 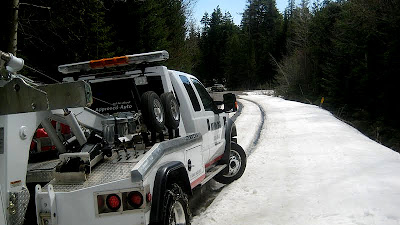 Eventually we hear the sound of the tow truck, coming from the same direction as the car did.  As the truck pulls in behind us, it starts sliding sideways. The driver quickly gets the truck under control, but it is clear that he is not going anywhere either.  Fortunately he was wiser than the rest of us as he had some snow chains.

He quickly installed the chains, and now with the truck in a more snow-conquering state  proceeds to winch my rental out of the ditch and back onto the road.  I carefully drive it across the snowy landscape until I finally get dry pavement under my tires.  A few minutes later the second car is freed, and finally the tow truck makes it off the snow onto blissfully dry and traction filled asphalt. 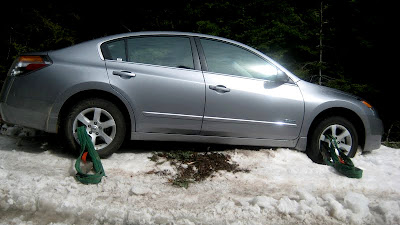 After settling the tow truck bill (AAA is a wise investment), I drive back to The Dalles and finally make it to work - just an hour late, and a heck of a story to tell.

I learned a few things that day:

1)  Tires on rental cars are not awesome for snow driving. Don't trust em for anything.

2) As a Canadian it is embarrassing to get stuck in the snow, but knowing a tow truck also had issues makes it seem better.

To this day, despite having returned to Oregon a couple times since, I have yet to get to Mt. Hood - perhaps I'll try the next time I am out there - but only if there is no snow.
Posted by Dave DeBaeremaeker at 1:39 AM

Great story Dave. Thank goodness you didn't slide any further down the slope.

I'm training for 911 call taking and dispatch right now so I liked your story! Legit reason to call in my opinion. There are far more NON-non emergencies that people call in for - so no worries.

Glad they got you out safely!

Aaaannd I also agree- RENTAL CAR TIRES SUCK. I had one and hit a TINY patch of ice in a Walmart parking lot and slid down hill and cause some damage ;-/

Thanks so much for sharing this story! I must say that I am comfortable driving through rough and snowy/ice-packed roads in my XJ with large mud tires, selectable lockers, a 12,000 lb winch and my hi-lift jack. With those 4 things, this Jeep is virtually unstoppable!

This story has me pretty excited about the first snow storm to hit New York....whenever it does hit!

OH and thanks for entering the contest and sharing the information about The 4x4 Podcast!

Kim from Snug Harbor sent me the link to your story. I've lived in the Portland area for over 20 years and hike and ski on Mt. Hood all the time. Yes, snow in April is not only common, but expected. Things in the high country sometimes don't melt out until June. Hope you'll come back some time and visit my favorite mountain.