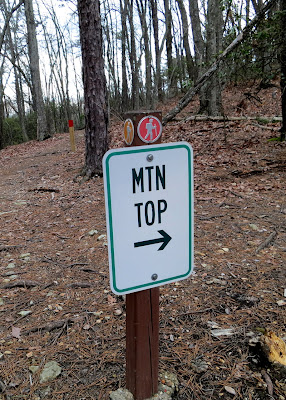 Sunday was Easter, so what is a good Presbyterian geocacher to do on such a holy day? Go caching of course.

The park is a large expanse of land with many rugged  trails. I had only three geocaches planned, which were on, as it looks on Google Maps, a 1 mile round trip hike from parking to the summit.  However when I got there I realized parking was actually on the other side of the park (the end of the road on Google Maps was a blocked off service road).  So I figured... meh. Lets cache the entire park!

So I proceeded to walk 5.4 miles around the outer perimeter of the park, and found 8 caches (2 DNFs. grr).

This was actually a rough hike.  Bakers Mountain is the highest point in Catawba County, however the rest of the park isn't, so there were a lot of steep hills to climb.  This nearly killed my legs (which are already weak from all the biking up the new uber-hill on the way to my new office at work) and the steep trails got my heart racing.  I may be a lazy fat man, but I try my best to never let something as trivial as a steep trail keep me from adventure, so I pressed on. 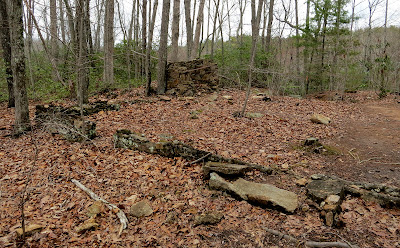 A good geocaching trip is one full of well maintained caches, and things you would normally not see if left to your own devices.  This hike at both in spades.

The first thing was the old homestead of A.G. Clark, who used to live in the park.  He served in WWII starting in Normandy and up to Bastogne.  This guy literally beat back the Nazis on the western front.  It was nice to visit his house, and a memorial placed in his honour.

The next cool thing I saw was an inuksuk.  An inuksuk (pronounced in-uk-shuck) is a pile of rocks called a cairn that often is designed to look humanoid and is intended to let others know that people have passed by - as a guide post, or to mark an area.  As far as I knew they only existed as an Inuit thing in very north Canada.  I was shocked to see one on a mountain in North Carolina.  It warmed my cold Canadian heart (I am a sucker for all things Canadian).

I eventually made it around the park to the summit.  The view was amazing.  It was here where I saw one of the neatest things nature has to offer.  I had a front row seat to watch a storm front pass by.

As I was grabbing the last cache, which is at the very top of the mountain, I heard some thunder in the distance.  I didn't want to be caught up on top with the rain coming in, so I hurried back down the slope.  There is an observation deck a short ways down the trail with an amazing view of the Catawba country side.  I could see the rain off in the distance.  I figured I was destined to get caught in the rain, so I put on my jacket, grabbed the dogs leash extra tight (she is not a fan of rain), and waited.  I figured if I was going to get wet, I might as well watch the rain come.

I was pleasantly surprised to find out that the storm was going to pass me by, so I didn't get wet.  So I headed down the mountain.  It started to rain just as I was getting to the van, and drove home through a torrential downpour, but I didn't really get wet.  I did get a pretty stunning before and after shot of the rain storm tho. These were taken 15 minutes apart, from the same observation deck:

Here are a few more images, including one of only two micros I found on the trails, a very cleverly hid bison tube: 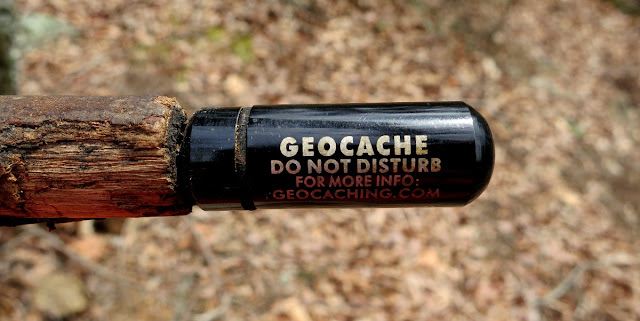 I'll leave you with a shot of my trusty geocaching companion, Bailey The Wonder Puppy.  She was anxious to keep moving down those trails - a true seeker of adventure if ever there was one. 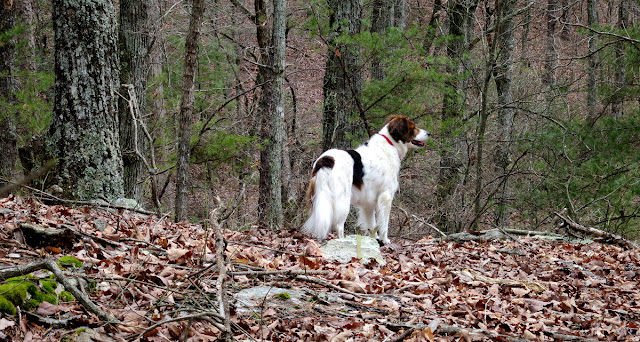 Posted by Dave DeBaeremaeker at 10:40 PM