Take Me To Your Leader: Race Winner! 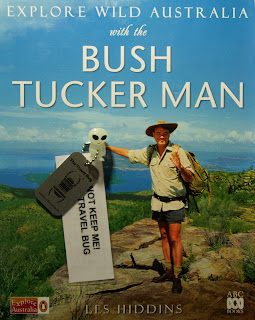 On June 5, 2012 I started a global travel bug race. I sent out 8 alien drone travel bugs to 4 countries on 3 continents, and the race was to see which bug would get back to my hometown of Lenoir NC first.

Today, amazingly, the first drone bug arrived in Lenoir.  We have a winner!  Drone #8 was the first to complete its mission. Woohoo!

This bug had the farthest to go - literally around the world.  I had started this bug off on its journey down under in Canberra Australia, where an awesome cacher by the name dvixen sent him on his way. From there he travelled 10,840 miles on his journey back home.

From Canberra he hopped over to Los Angeles, then a quick jaunt across North America to Connecticut.  He then travelled around Maryland and Virginia, then jumped to South Carolina.  In South Carolina he was picked up by a cacher by the name of grassfinger, who dropped him off at a TB hotel near my house in Lenoir. 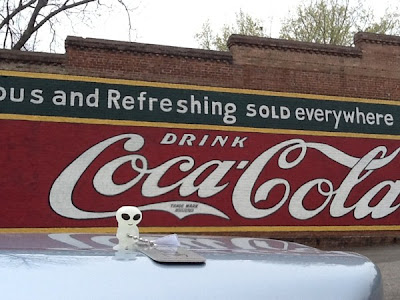 Of the original 8 drones to be released to the world, 4 have gone missing, and one arrived safe and sound.  This means there are 3 drones still out there that may still make it back home.  However I am absolutely stoked that even one made it back.

You can get the status on all of the bugs from the tracking page.

Several pictures of this bug were taken on the final journey for Drone #8, like the one on the right.  The rest can be seen on the drones status page here. 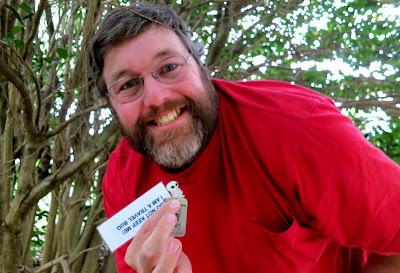 When I got notification that the travel bug was placed in the local cache, I immediately headed out the door with my wife to retrieve it (luckily my parents were in town to watch the kid :)  A few minutes later and I had the bug in hand, a winner declared, and a huge smile on my face.

Many thanks for dvixen for releasing this bug, and for grassfinger for going the extra last mile to him to the finish line.  This has been an awesome caching experience, and a great deal of fun, and really, isn't that the point?

Now you may be asking what the plans for this little drone are.  After travelling across the galaxy, and around the world, he is going to go into quiet retirement, spending the rest of his days at a TB retirement complex, sipping on Floovian Blue Juice, and listening to "just a little more Lynyrd Skynyrd".

This will likely be his last public photo before becoming a recluse: 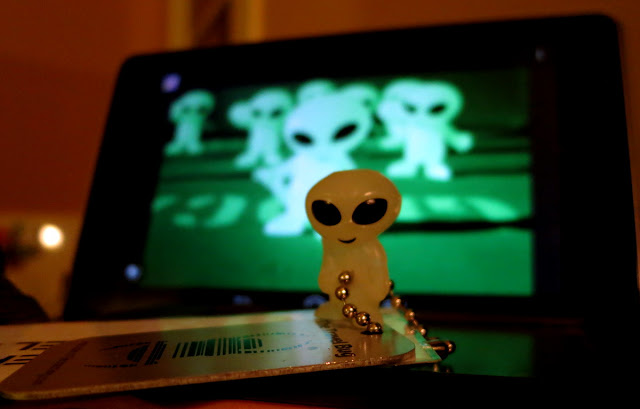