I received this note from the cache owner after posting my online log for the cache I did today:

I am also glad that you didn't get swept away on your way back!

I was out with the family shopping while the skies opened up. Little did I know that some poor cacher was out in the middle of the woods (on the wrong side of a creek) at that very moment!

This is the story of what lead to the above note.  I call it "The soggiest geocache adventure ever".

It went down like this: I was out in Idlewild Park near Charlotte NC.  The cache is roughly a third of a mile from the closest parking spot, and requires crossing a small creek.  Normally not a major concern for an experienced cacher such as myself, so with confidence I headed off down the path to claim the prize. 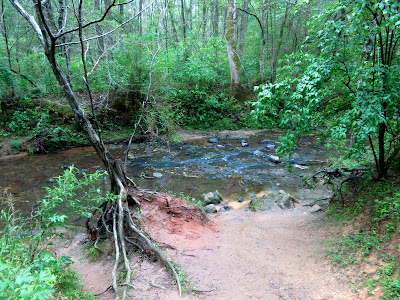 As instructed in the cache description, I crossed the creek at the provided waypoint, which was relatively uneventful (any river crossing in which my toes stay dry is a good one in my books). Climbing the bank on the other side proved a litte tricky as it has been raining and things were slick.

On my first attempt up the embankment I lost my footing and banged up my knee.  After a quick look around it was clear that this was the only way up, so I brushed myself off, and with more determination and care climbed up the embankment. Once at the top, a mere 500ft of bushwhack was all that stood between me and my quest.

I began picking my way through the dense woods.  The going was relatively easy until Mother Nature decided to add an interesting twist to the adventure.  About 200ft from ground zero  the skies opened up, and torrential rains fell from the sky. It went from dry to Noahs Flood in seconds, and I was immediately drenched to the skin.

Since I was so close to my goal, and wasn't going to get any wetter than I was now, I pressed on. Mercifully I quickly spotted the container and sign the log. 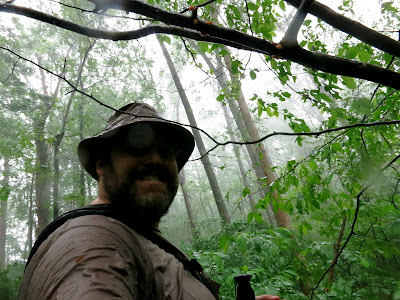 All that remained now was getting back to the van without further incidents.  The first obstacle being that slippery creek embankment that was now even more treacherous with fresh falling rain.

I grabbed some tree branches for support, and slid (un)gracefully on my backside down the embankment until my boots were securely implanted on solid ground at the bottom. I then waded directly across the creek (already soaked,  getting creek water in my boots was a minor inconvenience, and the water level had risen a bit so the dry rocks I crossed on were now under water anyway).

All that was left was a lonely soggy trudge back to the van. Or so I thought.

About mid-trudge I noticed a creek I didn't see on the way in.  I soon realized that the "creek" was a torrent of water flowing down the very same path I had walked down just 15 minutes earlier. I had never seen rain do that to a path before. It was rather intense and a shocking sight.  (I would have taken a photo of it, but when I tried I discovered my camera had become water logged and no longer functioned as a camera). The flooded paths forced me to bushwhack the entire way back to the parking area.

Once I made it back to the Geo-van of Destiny, and did my best to dry off (luckily I had some towels and a fresh t-shirt in the van),  I drove home.  I was still soggy when I walked into the house 1.5 hours later.

I only found two caches today, despite having six on my target list.  However I did have an adventure I won't soon forget, and really, isn't that the point of geocaching?
Posted by Dave DeBaeremaeker at 9:33 PM