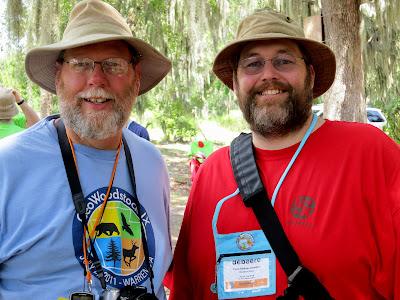 One of the best things about GeoWoodstock XI this year was meeting for the first time many people I have talked to online over the course of the last few years.  Also getting re-acquainted with geocaching friends I have met at previous events.

To give a little taste, one of the people I met was BigAl437, who is a regular contributer to cachecrazy.com, a fun blog about geocaching that covers a wide range of subjects and stories.  I have contributed original posts, and had some of my stuff syndicated there, so it was nice to put a face to a name of one of the folks I've been writing with all this time. 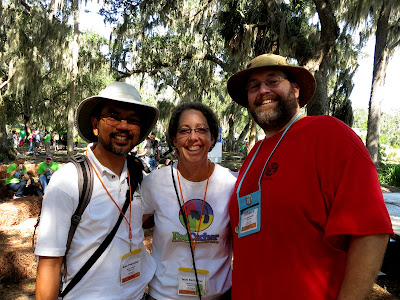 I also met Sonny and Sandy from the Podcacher Podcast, a weekly podcast about our favourite subject.  I have been listening to them for a couple years, and "called in" a few times.  They recognized me before I could introduce myself, which was kind of cool.  They are awesome folks, and if you meet em at an event,  be sure to say hi.

I met up with several cachers from the G+ community +Geocachers Unlimited.  These are cachers that enjoy all aspects of caching, regardless of whether its listed on geocaching.com or somewhere else (there is more to caching that just Groundspeak).  It was great to put some faces to those names as well. 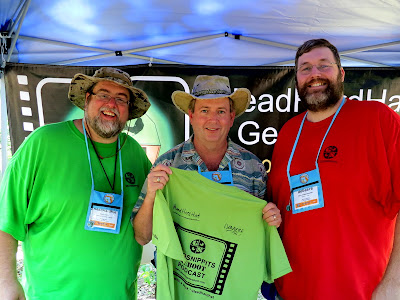 I signed my first autograph at GeoWoodstock XI. Thanks to SpotlightBK for letting me scratch my name on his Geosnippits Reboot t-shirt.  It was good to meet you in person!

I also met some other fans of the show, and even got recognized at a noisy event by the sound of my voice - kinda cool.

I also ran into some old friends of mine.  First off is leftyfb and deviousdragen, who are a married caching couple from Boston MA(ish) (and makers of some of the best beef jerky ever - and I've had Google Chef jerky).  I have been chatting with them on IRC for years now, and met them at previous GeoWoodstocks.  We got together after the event to do our first Chirp cache, and to get some other caching in.  They were there with jwubrownie and her friend and father.

I also ran into some local cachers, NavyChief89, and HoosierSunshine, both of which I've cached and been to events with in and around North Carolina.

Finally I ran into Robert Lipe, a fellow Googler, and software geek.  He has been to every single GeoWoodstock, and has helped out with registrations and IT stuff for many of them.  It was good to get re-acquainted with him, and talk shop for a while.

It just goes to show that, even for an anti-social curmudgeon like me, GeoWoodstocks can be a very social experience.
Posted by Dave DeBaeremaeker at 7:36 AM