WWFM X at Idlewild Park. May The 4th Be With You 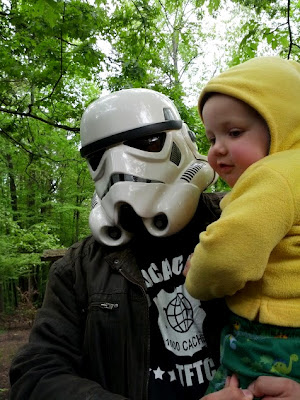 Today was an awesome day of geocaching.

It is Star Wars day (May the 4th be with you!), and also World Wide Flash Mob day.  In fact its the 10th WWFM day.  This years event was hosted at Idlewild Park near Charlotte NC.  Idlewild is, quite possibly, the best place to geocache I have ever seen.   There are about 20 caches in the park, and they share 295 favourite points between them, so clearly I am not alone in my thoughts on the matter.

The event was held at 1pm, but I arrived at 9:30 to start geocaching.  Since it was event day there were many geocachers in and around the park, so after a few finds I ended up in a group.  We hung out, finding geocaches, until flashmob time.

The flash mob event was Star Wars themed.  The idea that one dresses up as a Jedi (wear white), or a Sith (wear black), and we pose for a group photo.  I went as a Stormtrooper.  My son, having not yet seen the movies, went in gray (tho its not easy to see with his yellow jacket on).

Flash mobs are only supposed to last 15 minutes, so we quickly got down to the business of socializing and goofing off.  Eventually we all donned our props and had a spiffy group photo taken of 37 Star Wars loving geocachers:

After the photo we immediately resumed the all important geocacher job of socializing and goofing off. 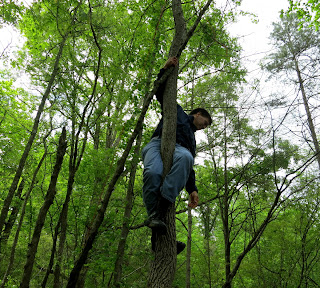 After a while (effectively doubling the length of the flash mob), a bunch of us headed over to try our hand at a really difficult cache located in the park.  Finding the cache is easy... its just hanging in a tree.

The hard part is that it is hanging in a tree 40ft in the air, on the first branch of the tree, which isn't large or strong enough to climb (tho some tried).  So finding the cache is easy - getting to the log book, and more importantly getting it back to its correct spot, is a different story altogether.

A large group of us - 20 or so - spent a good 2 hours trying to accomplish this mighty task (at one point I was the bottom turtle in a stack of geocachers, another time I was pointy stick holder number two).   Eventually the log book was signed by all, and the cache placed back.

Trust me... it is an awesome day of geocaching.
Posted by Dave DeBaeremaeker at 9:43 PM