The following events happened on July 8, 2013 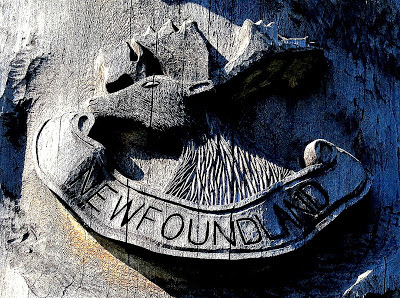 We have reached the most eastern (and northern point for that matter) of our epic road trip east: Corner Brook Newfoundland.

We (my wife, two kids, and Yours Truly) are in the middle of an epic road trip to explore the eastern seaboard of North America, from North Carolina to Newfoundland.

We have essentially one day to explore, and since it is not exactly an easy place to get to (due to distance and an inconvenient ocean), we wanted to make the most of it.

We got some tips and ideas of things to do from locals on the ferry yesterday, but a lot of them required more time than we had.   My wife is not a geocacher, and I didn't want to dominate the day finding tupperware - I wanted her to do stuff she wanted to do, but we had no idea what. 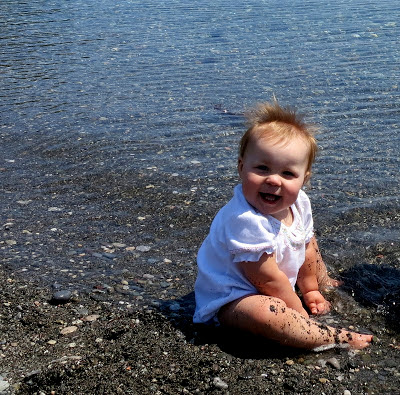 I, of course, am a geocacher, and I happened to have a list of highly favourited geocaches loaded up, so I suggested that we at least start the day by going to a geocache that promised a nice view of the bay. This turned out to be the best decision we could make.  Having this list of top caches quickly turned the day from a series of "I dunno, what do *you* wanna do?", to awesome exploration bliss.

We started the day by grabbing drive-thru breakfast(this hotel being the only one we've stayed at this trip that hasn't served breakfast), then headed up the hills to GZ.

After feasting on McBeakfastMeats at a picnic table, we checked out the views.  The cache (actually two caches, but who's counting?) was at a park that held a monument to Captain Cook, the explorer who mapped most of the Newfoundland coast in the 1760s.  It seemed a fitting start to a day of exploration to visit the monument of exploration history.

Oh, about those views... this was the view from the park:

This cache worked out so well (I got a smiley, we all got awesome things to look at), we came up with a plan of caching the best of caches in the city, then going for a drive out along the bay when the kids go for a nap in the van after lunch.

Our next stop was a cache at a train museum.  When we arrived Abigail fell asleep in the van, so my wife stayed behind while Zeke and I explored two trains ($2 for a year pass - not shabby!).  We also found the cache, which was hidden 500ft down a set of old tracks. 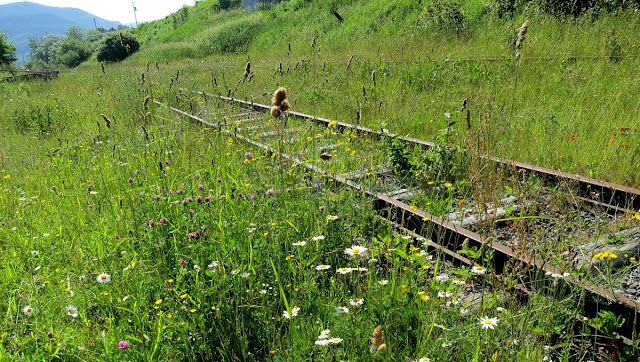 Our next step was to take that scenic drive along the bay about 40 klicks east to Blow Me Down Provincial Park (that is the real name, I swears it!).   It was here we came across an amazingly beautiful scene.  A beach, clear blue water of the bay, and tall hills outlining the whole thing.

We let the kids play in the water before eating a picnic lunch.  You can see some of the bay in the backgrounds, and baby smiles in the fore. 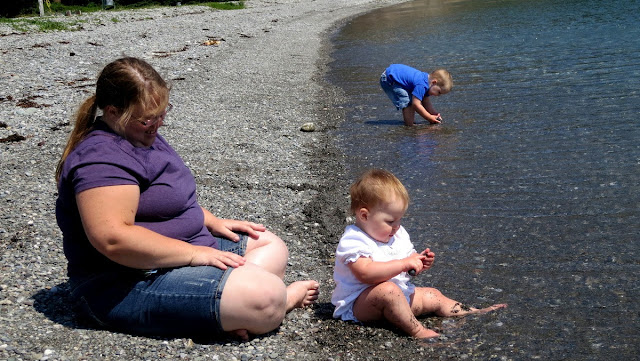 The beach was all nice smooth rocks, so little sand to get into diapers.  The kids had a blast playing, and I spent some time skipping stones. 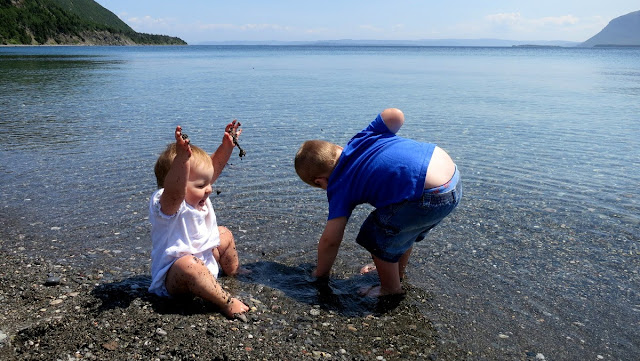 The possibilities of play seemed endless, but soon it was time to eat lunch and do some exploring. 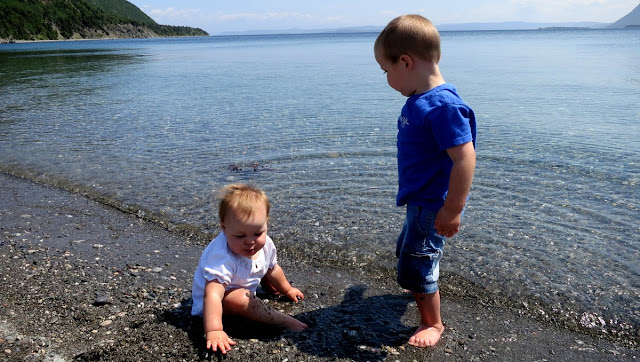 After lunch we walked 700ft down the beach to grab a cache.  It was hidden among these large rocks.  It was a bit of a climb over them, but I managed to make the grab without breaking and legs, or scraping any skin. 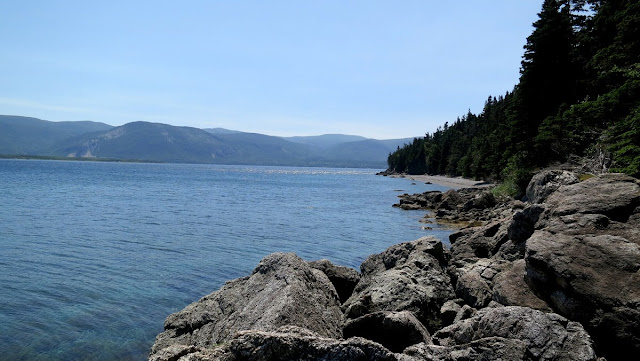 We then went on a hike up the mountain that formed the coastline along the eastern side of the beach.  It is about a 750ft climb - fortunately they built wooden deck and stairs to make it easier.  At the top is an observation platform, and a geocache (in theory).  I was unable to find this cache - my first DNF of the trip actually - but when faced with views like this, it hardly seems to matter.

On the way back down from the observation deck I took a detour to log an earth cache at the base of the Governors Staircase, which is a set of wooden stairs set in the cleft of a rocky cliff that runs from the beach up 50ft or so.  I had Abigail on my back (in a baby sling my wife made - forgive the girliness of it - maybe the next one she makes will be in manly camo) 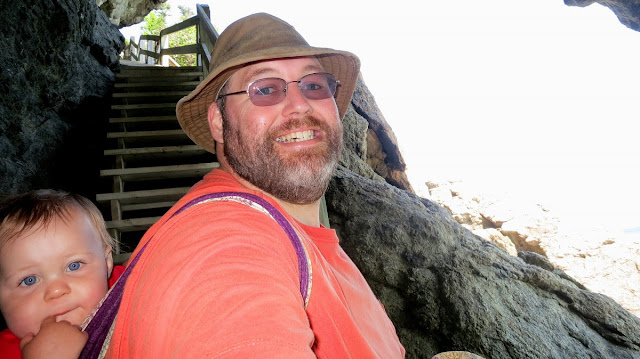 On the way back to Corner Brook we stopped by an old copper mine.   There was a cache at the (unfortunately) blocked off mine entrance.  There is another cache a half klick down the trail, which was an easy find... once I found the right trail. There are two trails that lead from the parking lot... one goes up, one goes down.  I of course took the one that went up, and didn't realize my mistake until I was 300ft up, and 600ft down the trail. I then did a retrograde maneuver and located the correct trail (in my defense the trail map only shows one trail, and the trail head for the other trail is hidden by some trees).  This was the view from GZ... 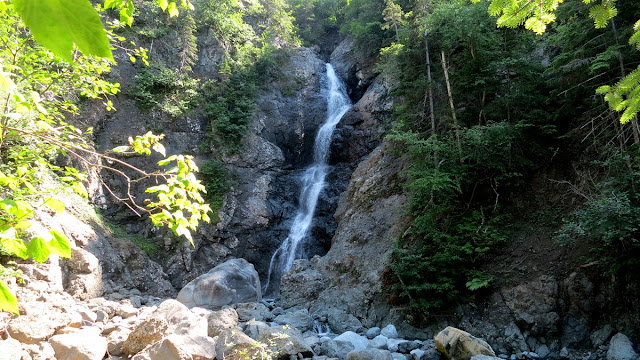 ... and this is the view from the parking lot.    I can take this view all day long. 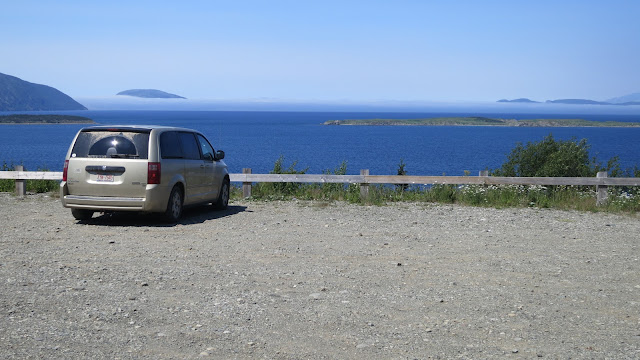 After this we drove around some more, and saw a crackin' good totem pole, and some more amazing scenery.  Then we headed back to the hotel to get some food and rest.  Tomorrow we head back across the ferry to Nova Scotia.

We're about half way done, but we are not yet finished exploring Canada, so stay tuned to see where we end up next.
Posted by Dave DeBaeremaeker at 9:02 AM