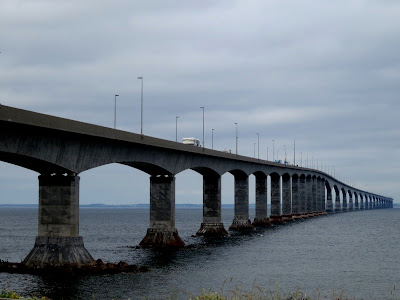 My family (wife, two young kids, Yours Truly) are on a 3 week epic road trip to check out the eastern North America. So far we have travelled from our home in North Carolina up to Newfoundland, and this morning we are in Sydney Nova Scotia.

Today we are headed to Charlottetown, Prince Edward Island.

It was mainly a travel day.  We did some geocaching along the way, but most of it was not super awesome or blogworthy.  I will say thanks to the cachers that hid caches specifically for those that are traveling,  as it made the day go faster (and yet, not a single LPC). It also rained a lot of the day, so we spent most of it in the Geovan of Destiny putting on some mileage.

I did manage to cache in 3 provinces today, which is kinda cool. Its not easy to do that, given each province is so dang huge.

The highlight of the trip was Confederation Bridge.  It is a 12.7KM (8 mile) bridge that connects New Brunswick to Prince Edward Island. It runs the entire width of the Northumberland Strait. Then longest span is a short hop of  820ft (you could hide two geocaches on that one span alone - too bad pedestrians are not allowed on the bridge).  I think you will agree that this is one substantial bridge.

There is a puzzle cache that starts at the highest point of the bridge, which requires getting information off a sign as you drive by.  I had solved that with Street View before I left North Carolina (thanks Uncle G!), and I managed to grab the final before crossing the bridge.

When we got to PEI we found another cache that promised a view of the bridge. It did not disappoint:

Yeah, *this* is what caching is all about.  This is Confederation Bridge in the background, with the famous potato fields of PEI in the fore.  A truly beautiful scene, and highly appropriate given the province I was now in. It is also my first PEI cache. Win.

Tomorrow we're going to explore the island.  What adventures lie in store for us?  Stay tuned.
Posted by Dave DeBaeremaeker at 9:23 AM