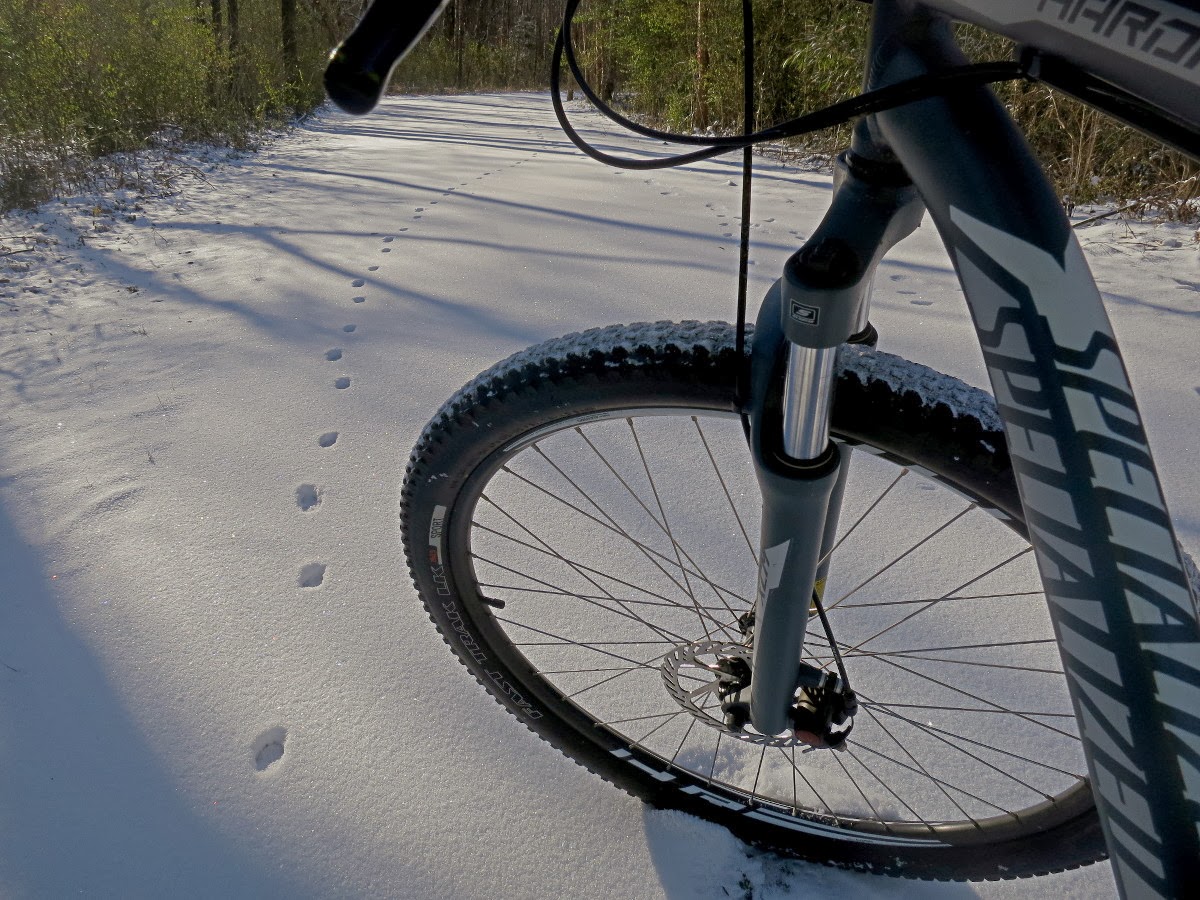 Frequent readers of this blog (hey you!) will know that I frequently commute to work by bicycle, do not like letting bad weather stop me, and love playing in the snow.

So you will likely not be surprised to read that when I woke up to see an inch of snow on the ground, and a temperature of 14F, on a weekday, that I immediately saw it as an opportunity to try something new:  biking to work in the snow.

I've never biked in snow before so I didn't know what to expect, but one never knows unless one tries, so I figured "what they hey", and hit the bike shed.  I grabbed my mountain bike, as the thicker, knobby tires would afford more grip.  Despite technically being on pavement the entire way, I figured it would feel more like off-roading.  So armed with an off-road ride, extra gloves, and a heightened sense of adventure, I headed out the door and down the road.

I brought along my camera to document the experience.

I took a video of my normal commute in decent weather last year(-ish) so if you want to see what its normally like, click here.

My first stop was along the bridge in the middle of the Greenway.  It seemed like a scenic place to take a break and enjoy the crisp wintery air. 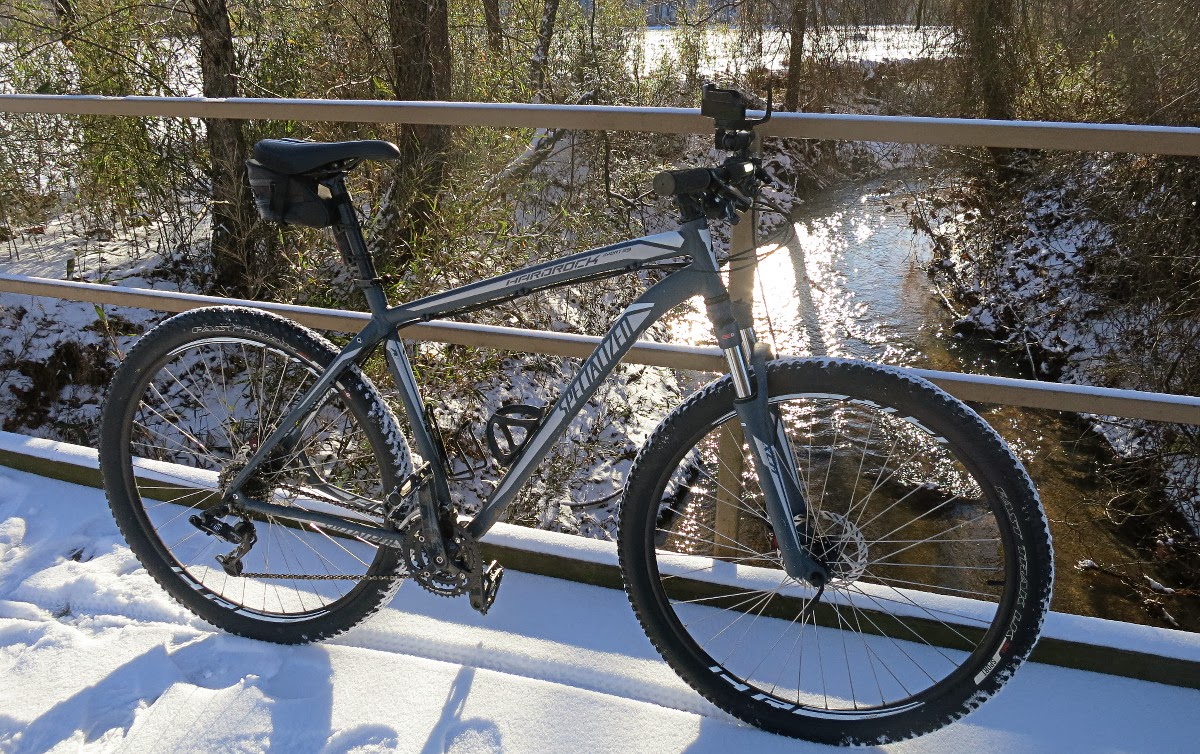 The roads were covered in snow, but the cold temps ensured the ice wasn't that slippery (pro tip:  ice only gets slippery closer to freezing, and gets less slippery as the temperature drops).  The snow was crunchy so my tires got a surprisingly good grip.  I only spun my tires a couple times.  I never felt like I was about to slip out of control. 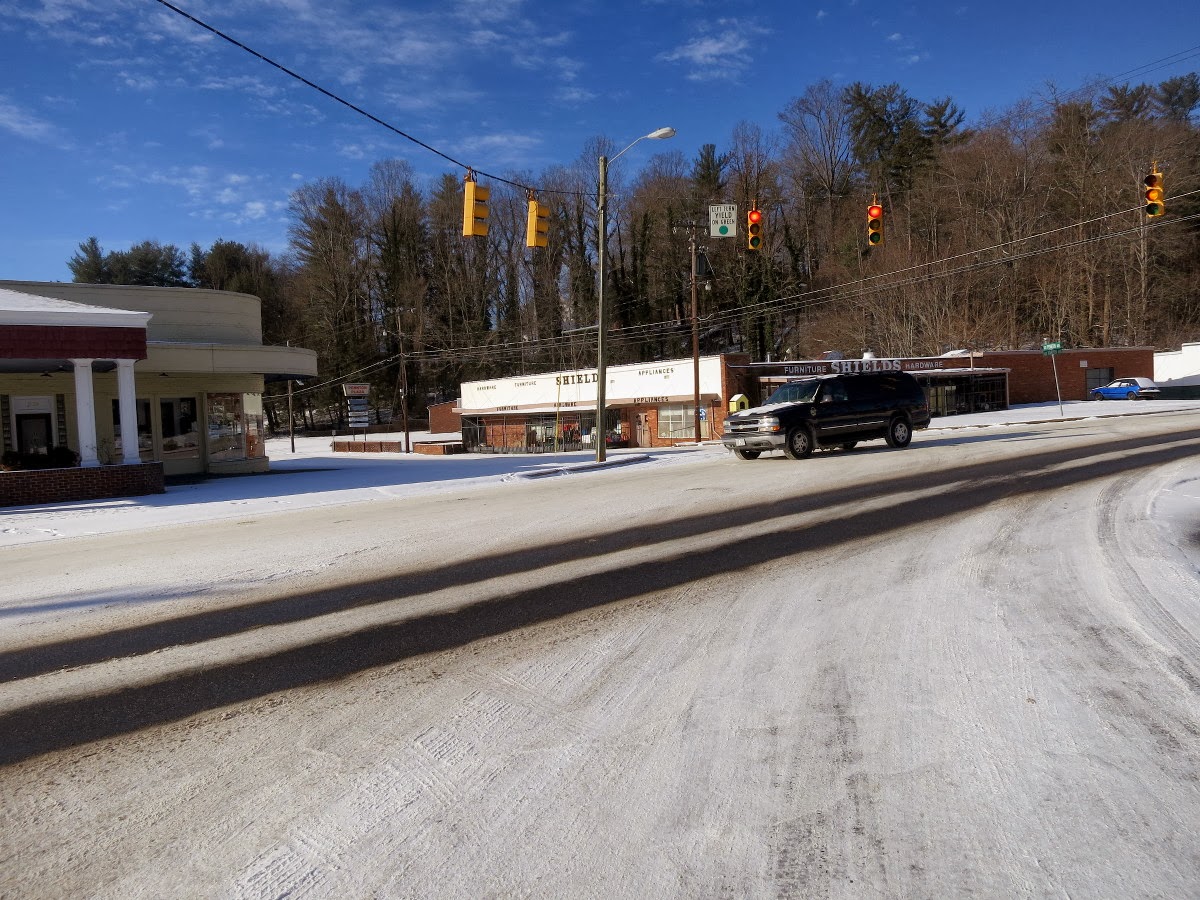 This was the condition of the roads for the majority of my commute. 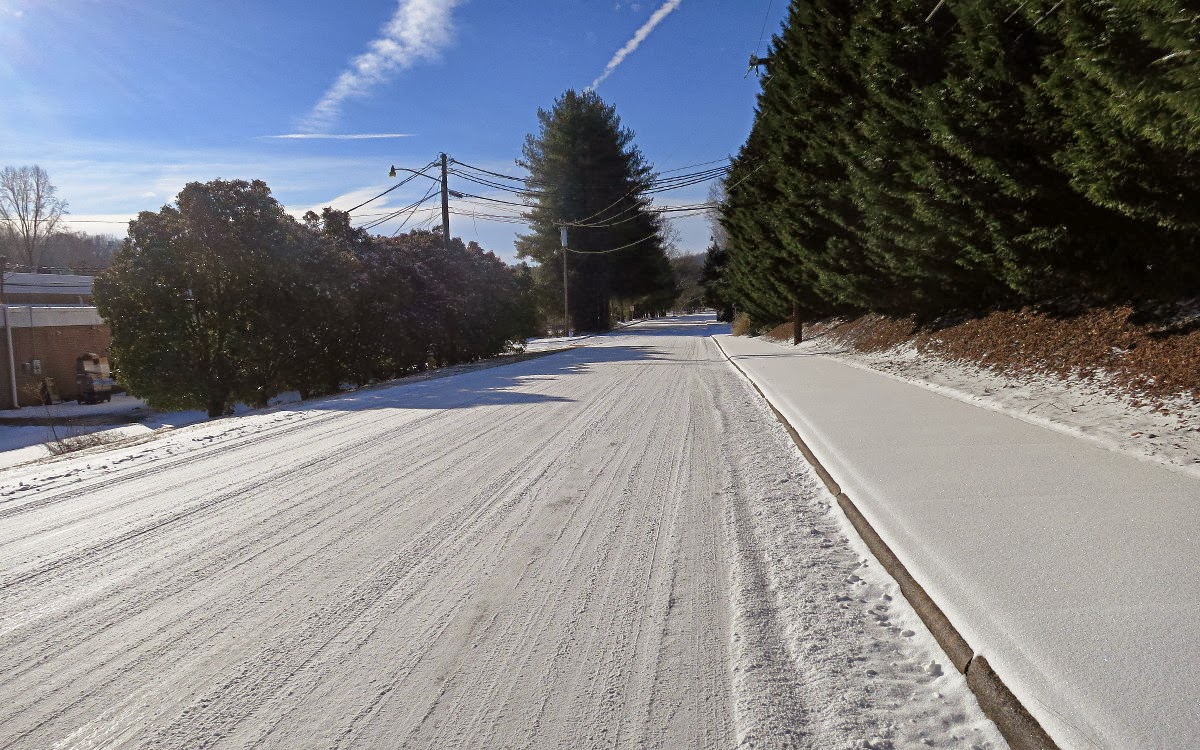 Stopping for a mug shot to prove it was me on the ride. 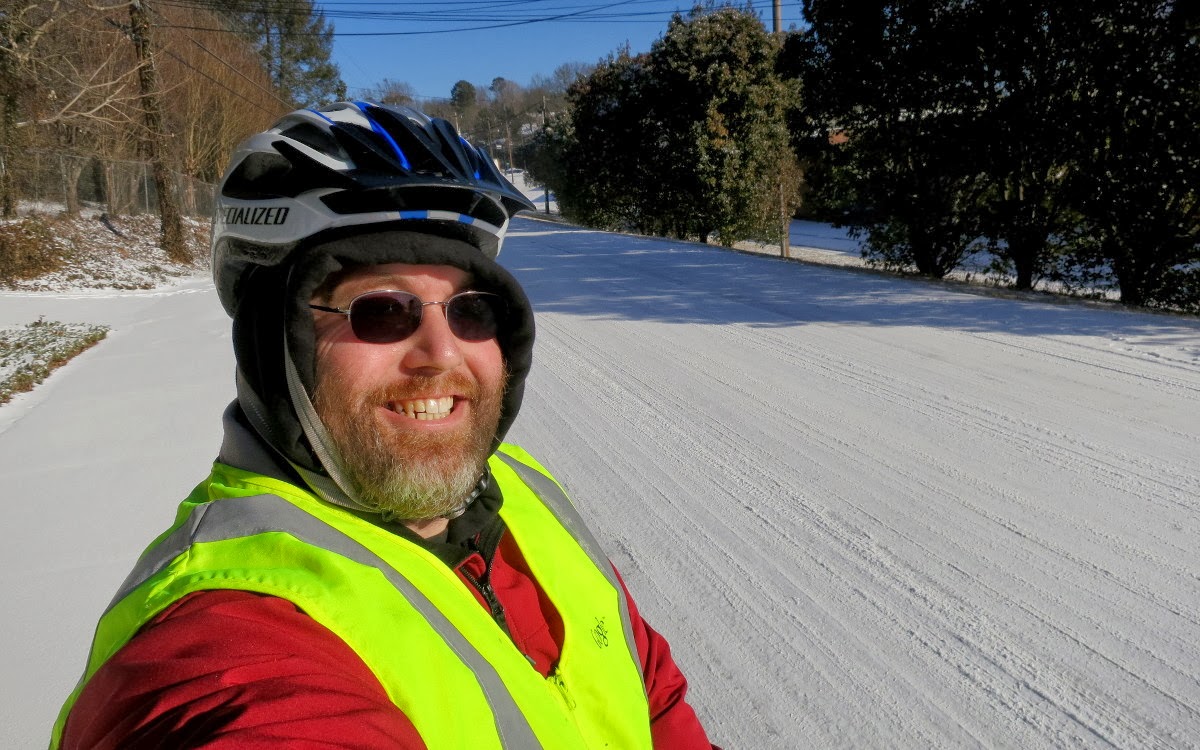 As I was cresting the large hill on Pennton Ave, I noticed that a (perhaps 'the') snow plow was behind me (I wasn't sure this town actually had a snow plow, not sure it has more than one).

The plow was not laying down any salt or sand, so all it was really doing was clearing off the crunchy loose snow and making things more slick.   I was probably better off staying in front of it the whole way, but after getting back to the bottom of the hill I stopped to let it pass. 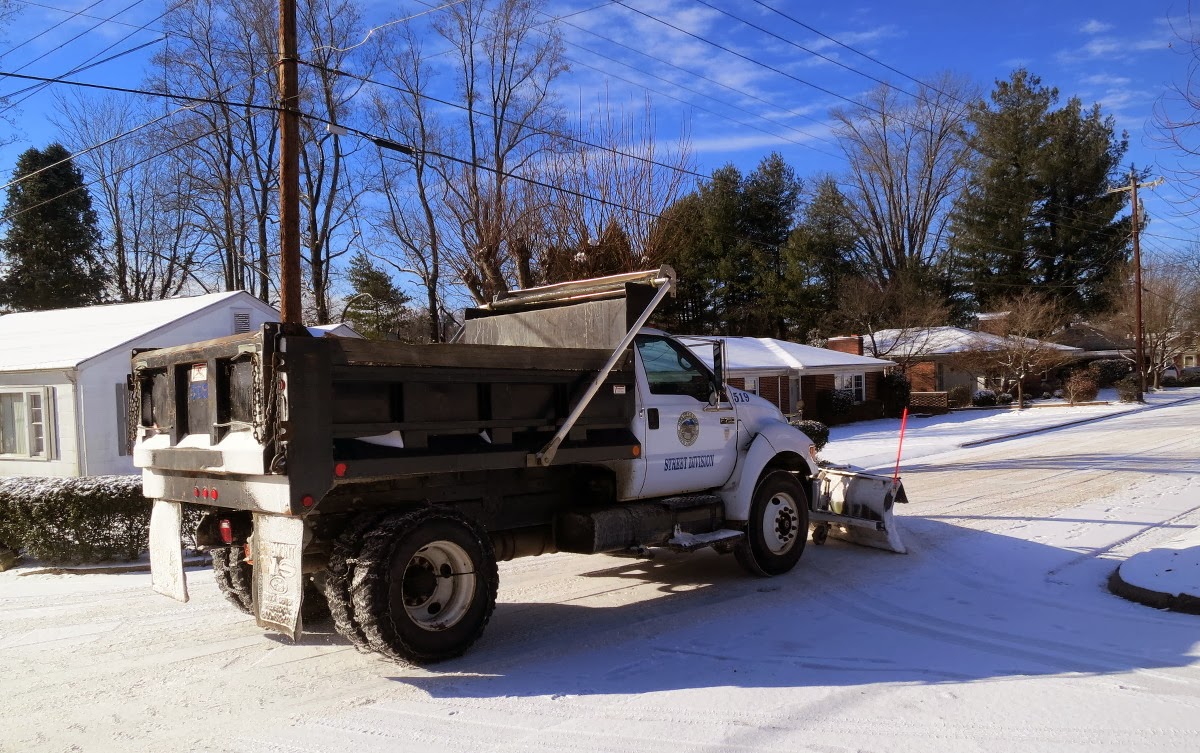 Finally arriving at the entrance to the place where I work, I raised my hands in victory.  I still actually have another half mile of riding after this point, but its more of the same - I'm not allowed to take pictures on site anyway, so this is the end of my ride for blog purposes. 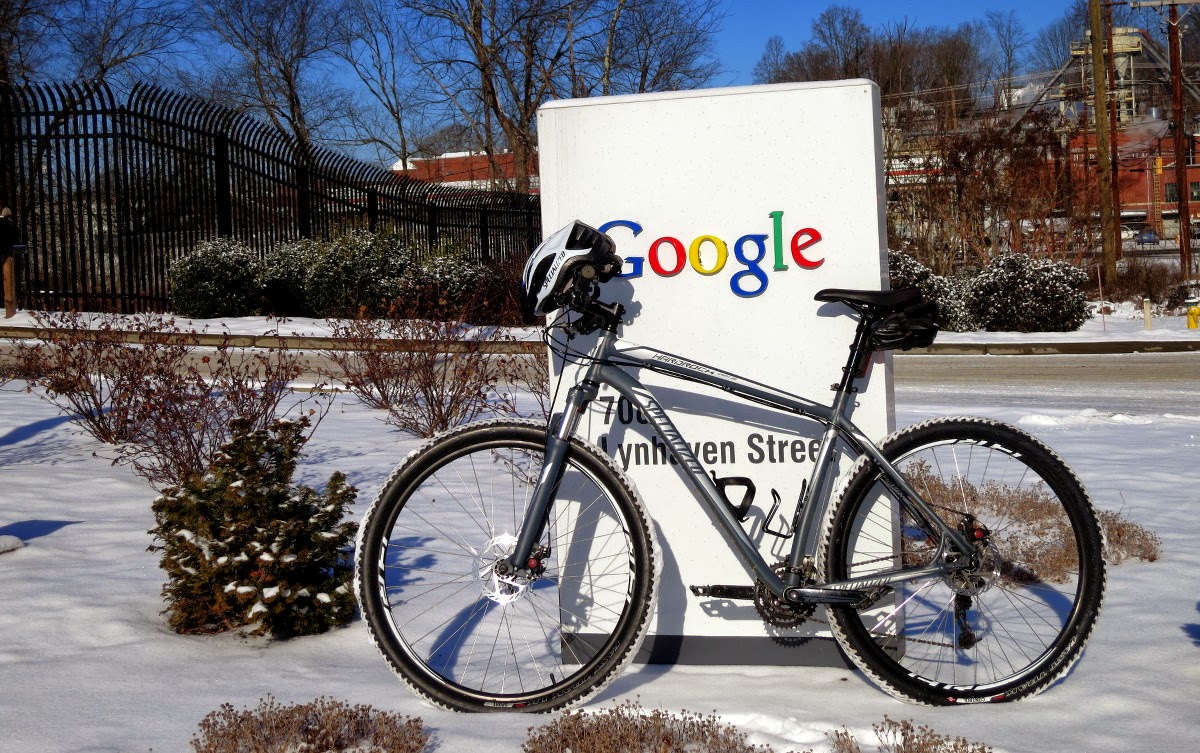 So that was my commute this morning.  Surprisingly it only took 25 minutes longer than normal, and thats with many stops to take pictures along the way. I also managed to keep the rubber side down the entire way.

I am really glad I did this.  It is the most fun I've had in quite some time (and that's saying something). Since I live in the south, and this snow, all of one inch, has closed schools for two days, cancelled many church programs, social gatherings, and half the city, it was kinda cool to bike where many feared to drive.

I received some nice comments from co-workers when I finally got to the office, including "congrats on maintaining the honour of your native land", and "you win at winter". The best comment came from a response to the pictures I posted on the Bike Commuting community on Google Plus.  It was originally in Polish, but it translates as: "A vicious biker with you does not forgive the winter".

I am not sure exactly what that means, but I am pretty sure thats the most bad-ass thing anyone has ever said about me.
Posted by Dave DeBaeremaeker at 8:48 PM