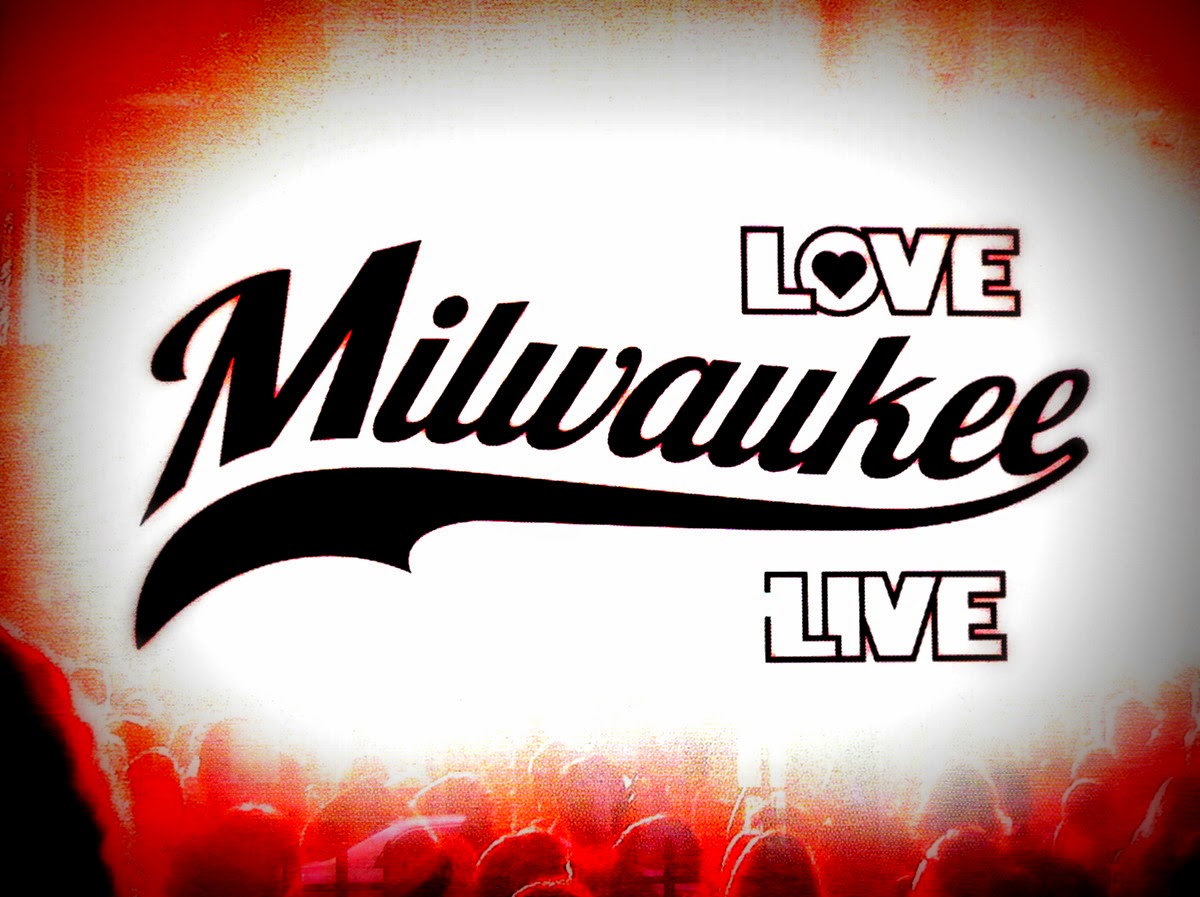 One of the best parts of taking road trips is going to places you have never been to before.  So far this trip have been to places at least one of us has previously experienced.

This was all about to change, for we were to enter the brand new territory of Wisconsin.

We planned to stay overnight just outside Milwaukee.  This means that  by the time we finished finding the oldest geocache in Illinois, Beverly, that morning, we would end up in Milwaukee for lunch, and give us the afternoon to explore the city.

Being geocachers we probably didn't explore the city as normal folks, but normal is boring, so we didn't mind so much. 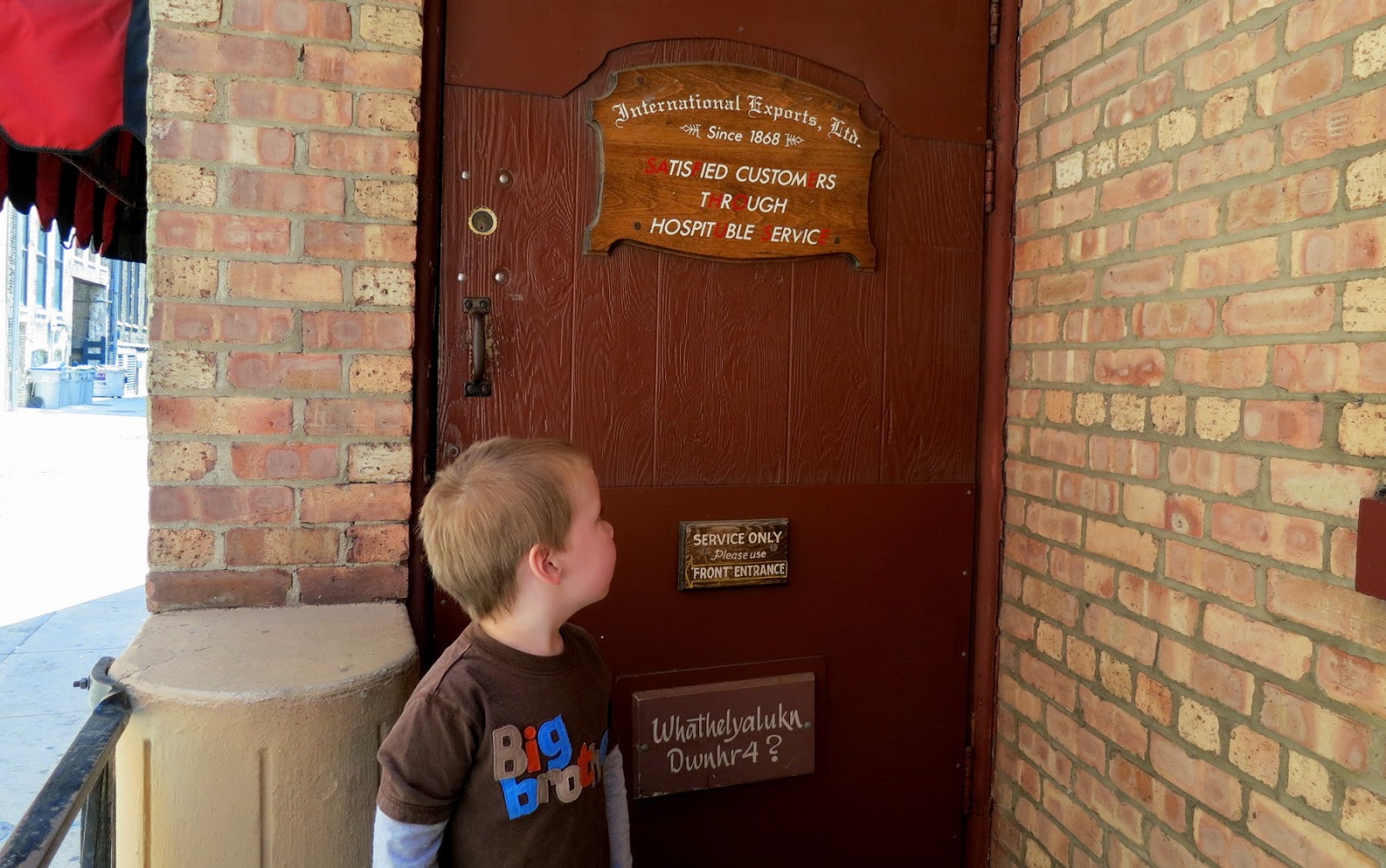 The first thing we did when we hit town was infiltrate a secret spy safe house.

The Safe House is a spy themed restaurant, and "theme" is a misnomer.  The place lives and breathes spy stuff.  You even need to know the secret passphrase to get into the place.

Zeke spent some time exploring the front door before we were able to gain access.

Once inside the place is full of spy memorabilia... movie posters, props, crazy spy cliche things like secret doors and one way mirrors, and even some actual artifacts from real life spies.

It also has a geocache.

They keep in in a secret place (behind the bar I think) so this was the first time I ordered a geocache from a waitress.  I literally said "Hello!  I would like some deep fried cheese curds, and a geocache please."  Her response:  "Yes sir, I'll go fetch that right away". 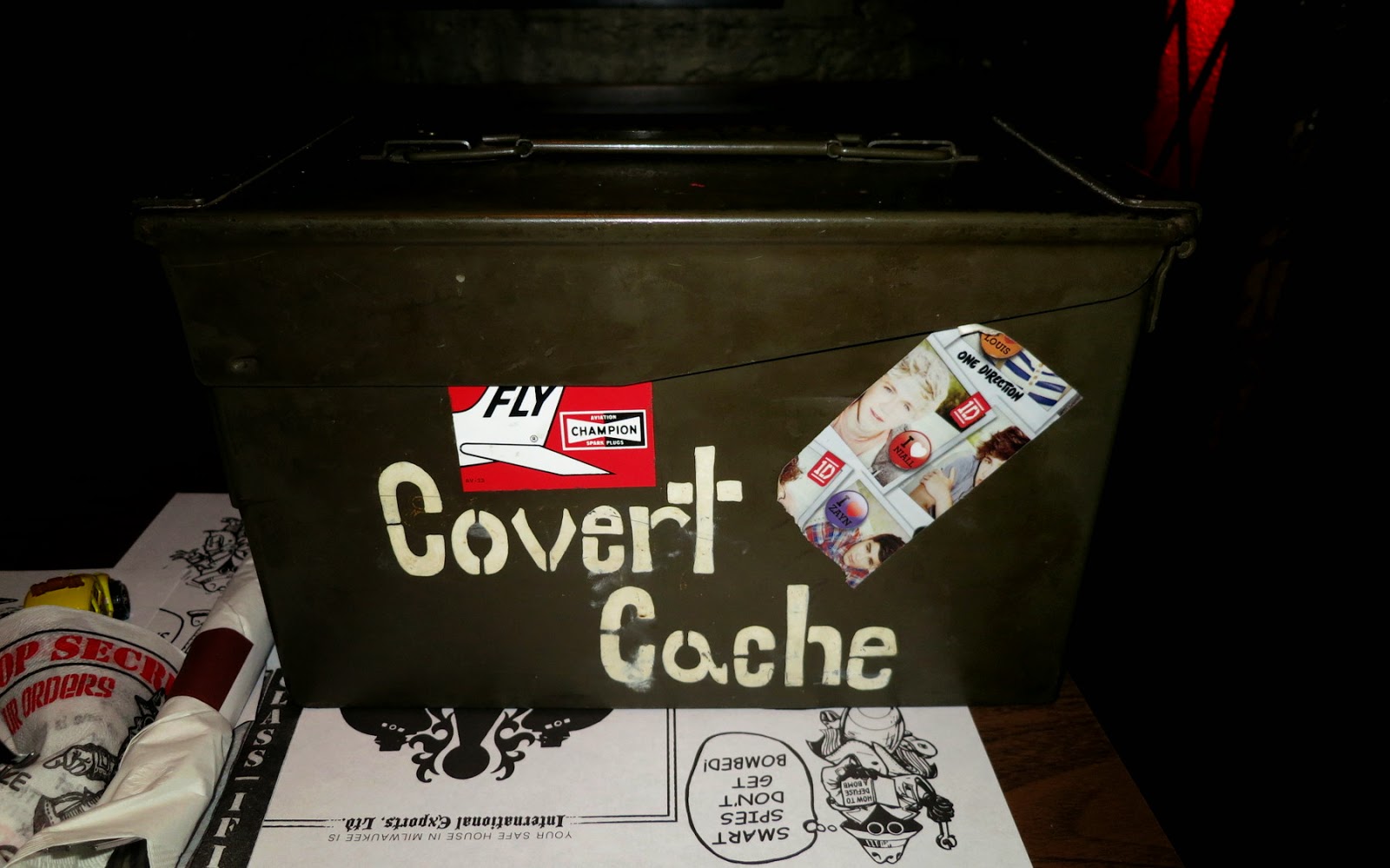 The deep fried cheese curds were also delicious, if you were wondering.

After the feast we took a walk along the pathways that line both sides of the river that runs through town. 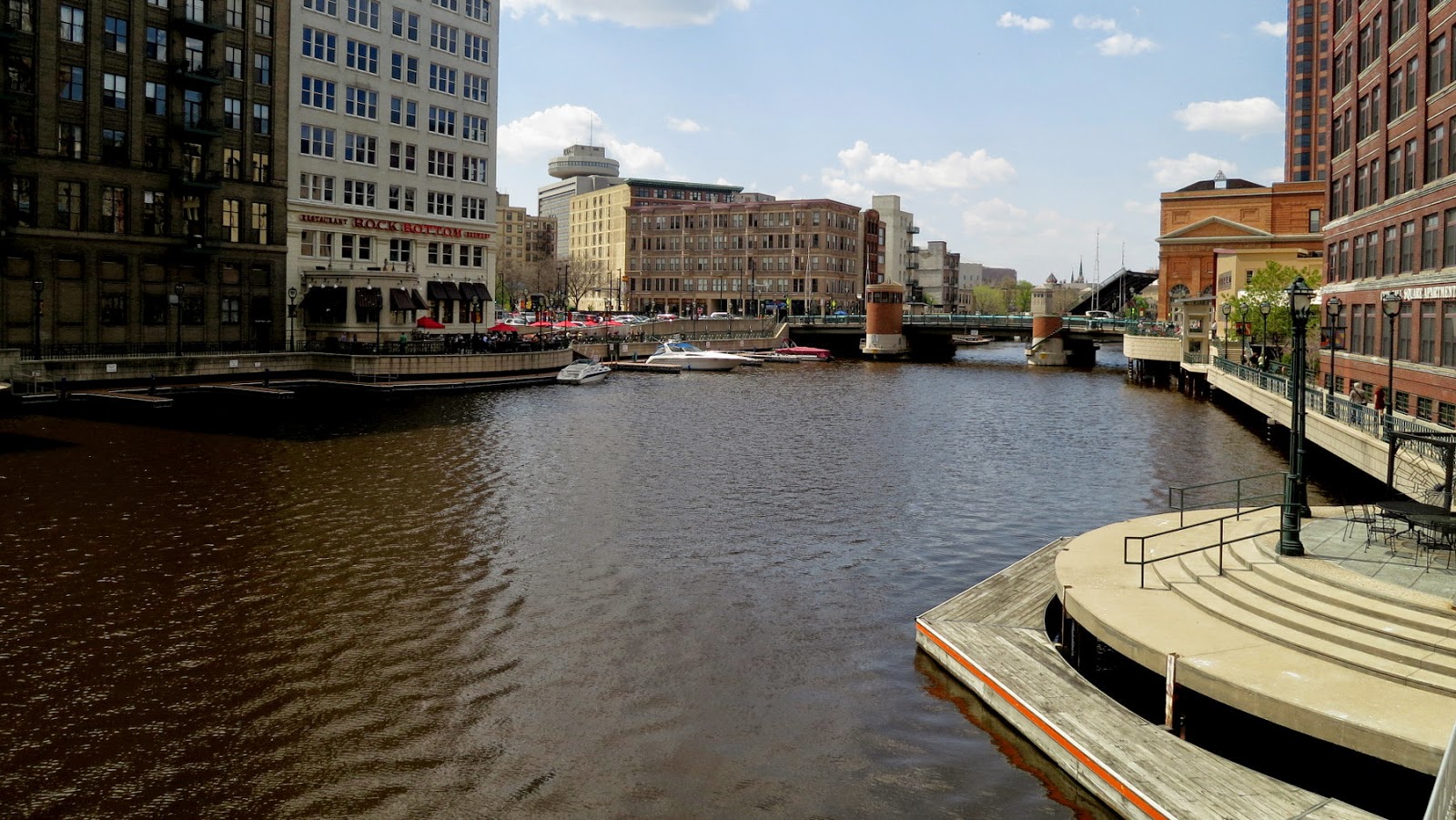 We ended up at another cache near a statue dedicated to all those hard working US Postal Service workers.  This was also the cache where Abigail signed her first log. 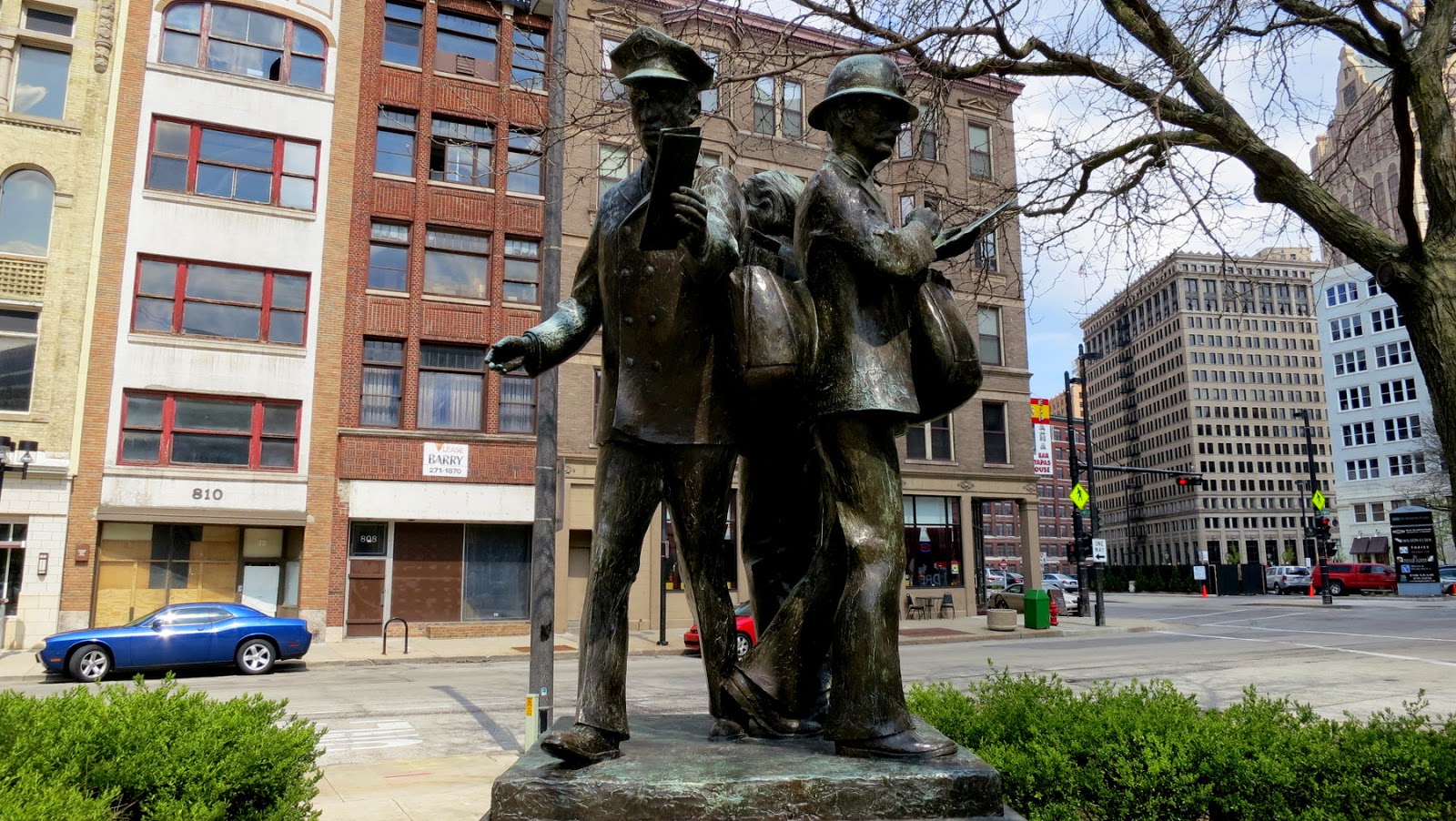 The cache led us down the road to another statue, so we moved on to find that one... some of us with a well earned victory swagger over her first cache log signing. 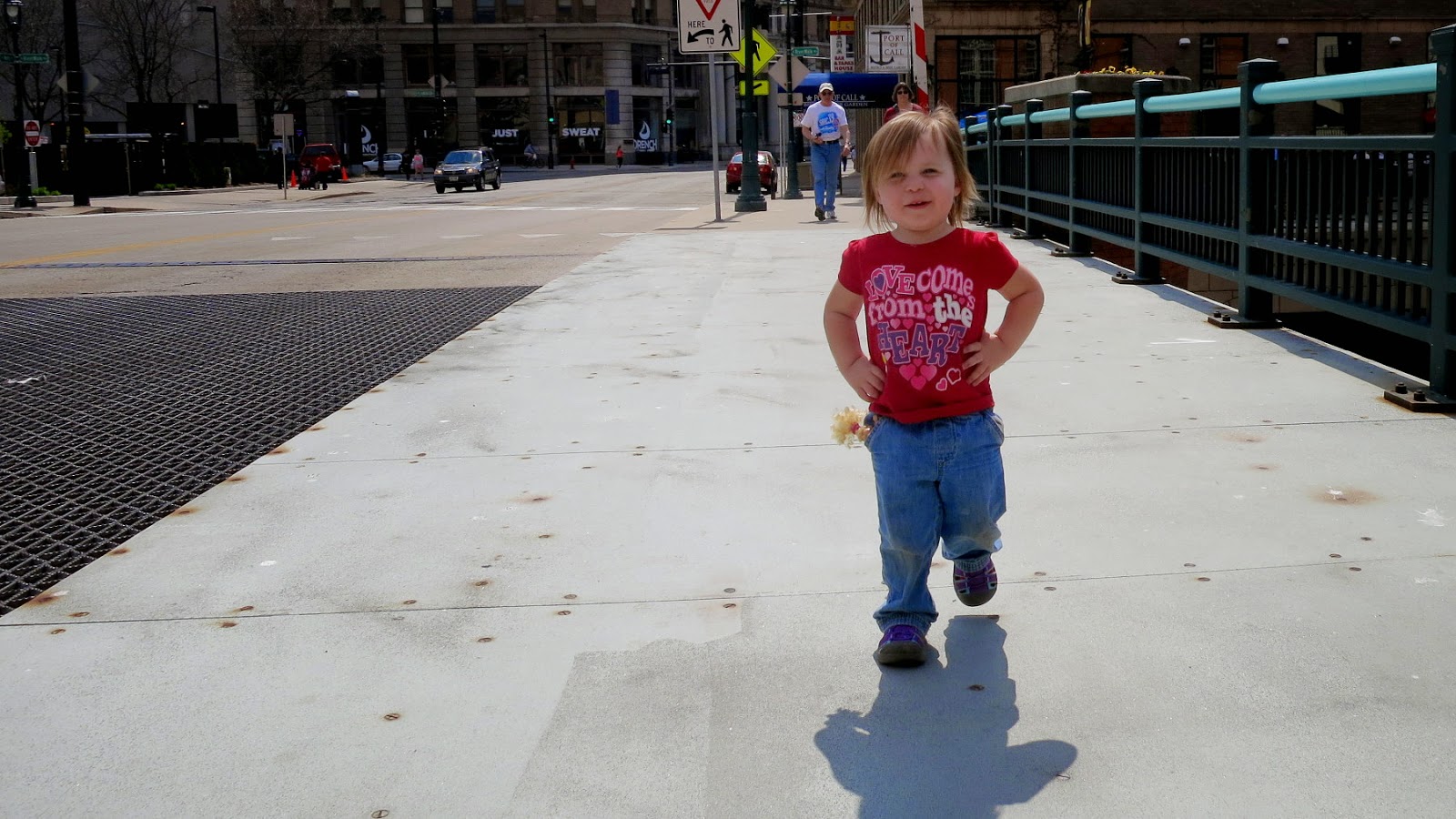 We ended up at a statue of The Fonz.  Author Fonzerelli himself (in statue form).  I touched him - he's still cool. 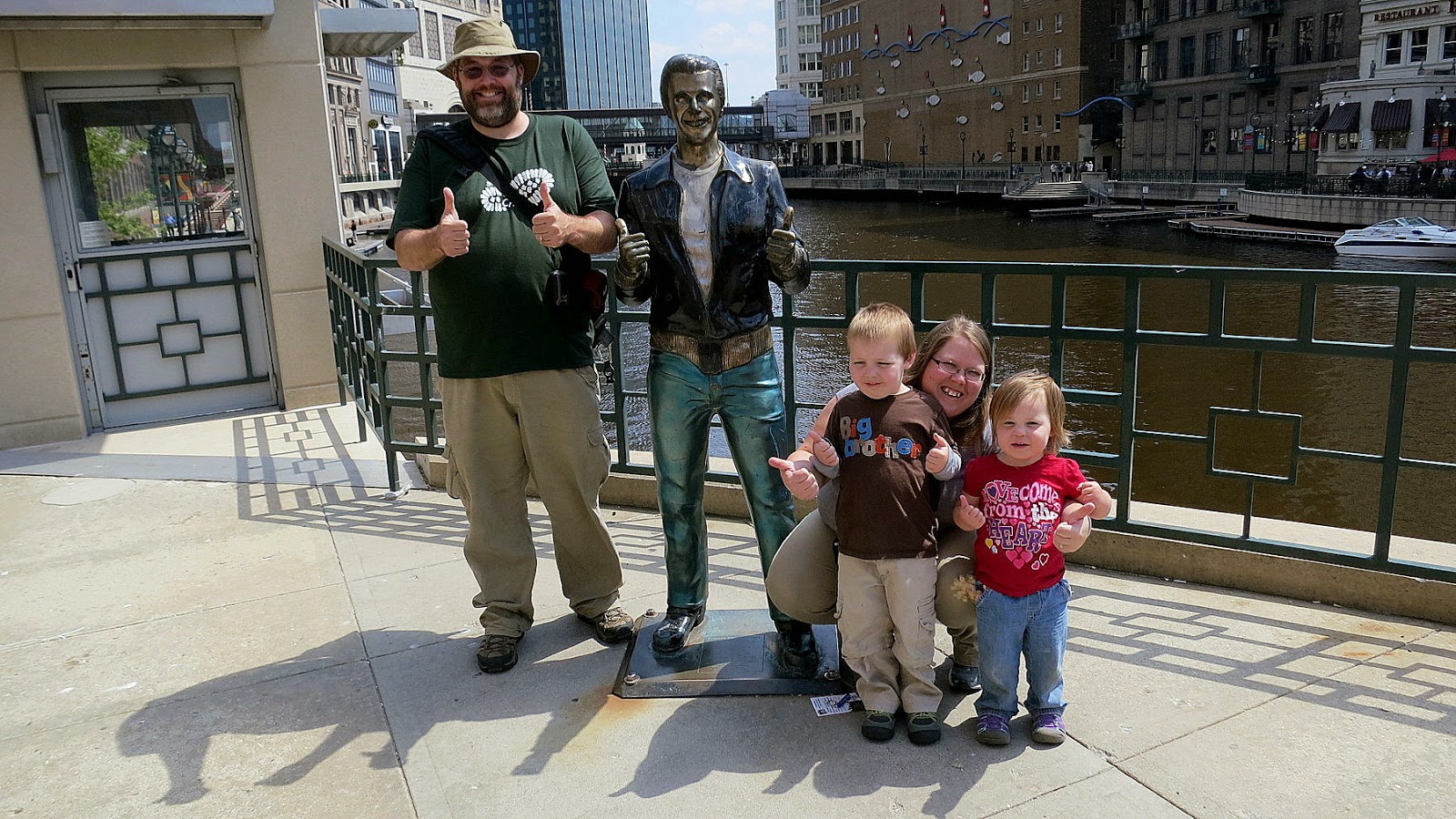 From there we did some more exploring.  There was a pedestrian bridge that went across the river.  Zeke loves pedestrian bridges so he asked if we could use it.  The bridge went from the second floor of two buildings, so we went off to find out how to get on the bridge.  Getting on it proved to be easy, getting back to the street on the far side proved to be more interesting, and we ended up a whole block away before we saw outside again.

From there we got back into the Geovan of Destiny and cached our way to the hotel.

The next day we kept going west.  Wisconsin is famous for cheese, and we didn't want to leave the state without consuming some fomage de la Wisconsin, so we stopped by a cheese store. 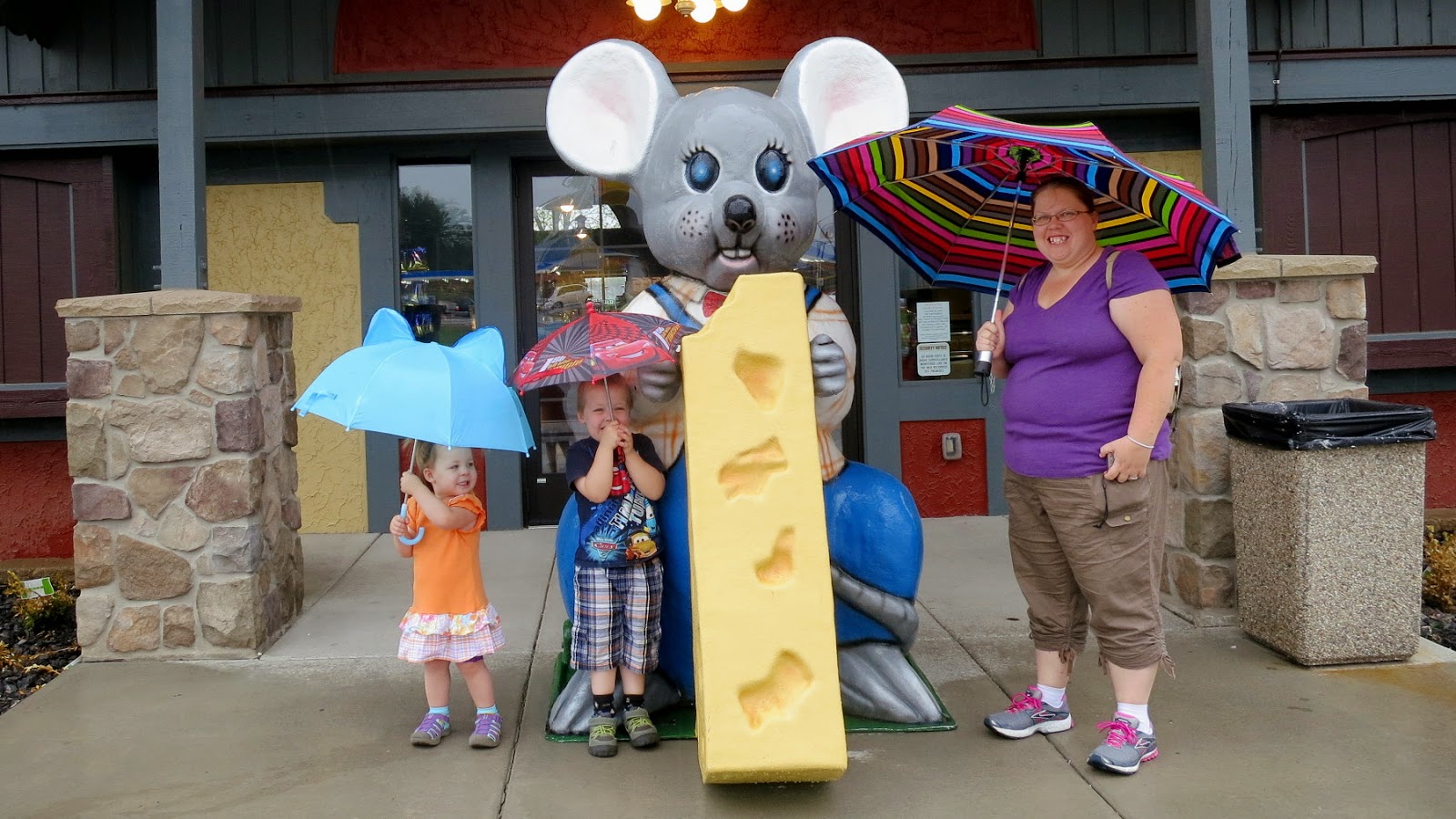 Then it rained.  Oh the rain.  Basically it was extremely wet for the entire day.  We found out when we got to the hotel that night that there was a record rainfall of 2.5 inches - previous daily record was 1.5 inches.

As a result we spent most of the day driving, and not a lot of adventuring.  We did have a lunch of cheese and crackers at a rest area tho: 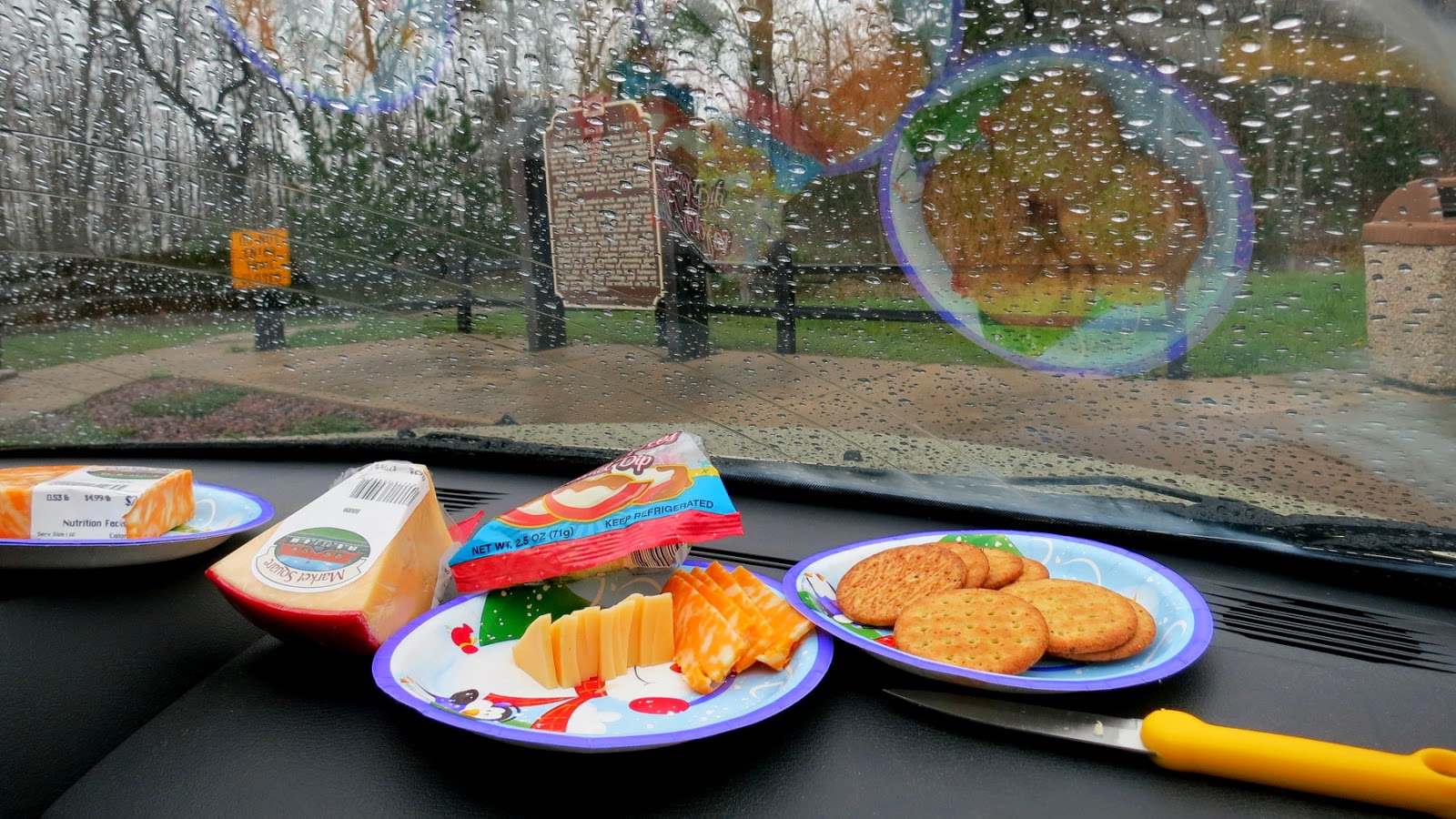 The rain did put a damper on the day a bit, but thats OK - it was the last time the rain had any significant impact on our schedule for the entire trip.    We spent the night in Minneapolis, which brought us a whole bunch of new adventures, so stay tuned!

<== Naperville | The Biggest Ball Of Twine In Minnesota ==>
Posted by Dave DeBaeremaeker at 6:37 PM