Long Way Round: The Biggest Ball Of Twine In Minnesota 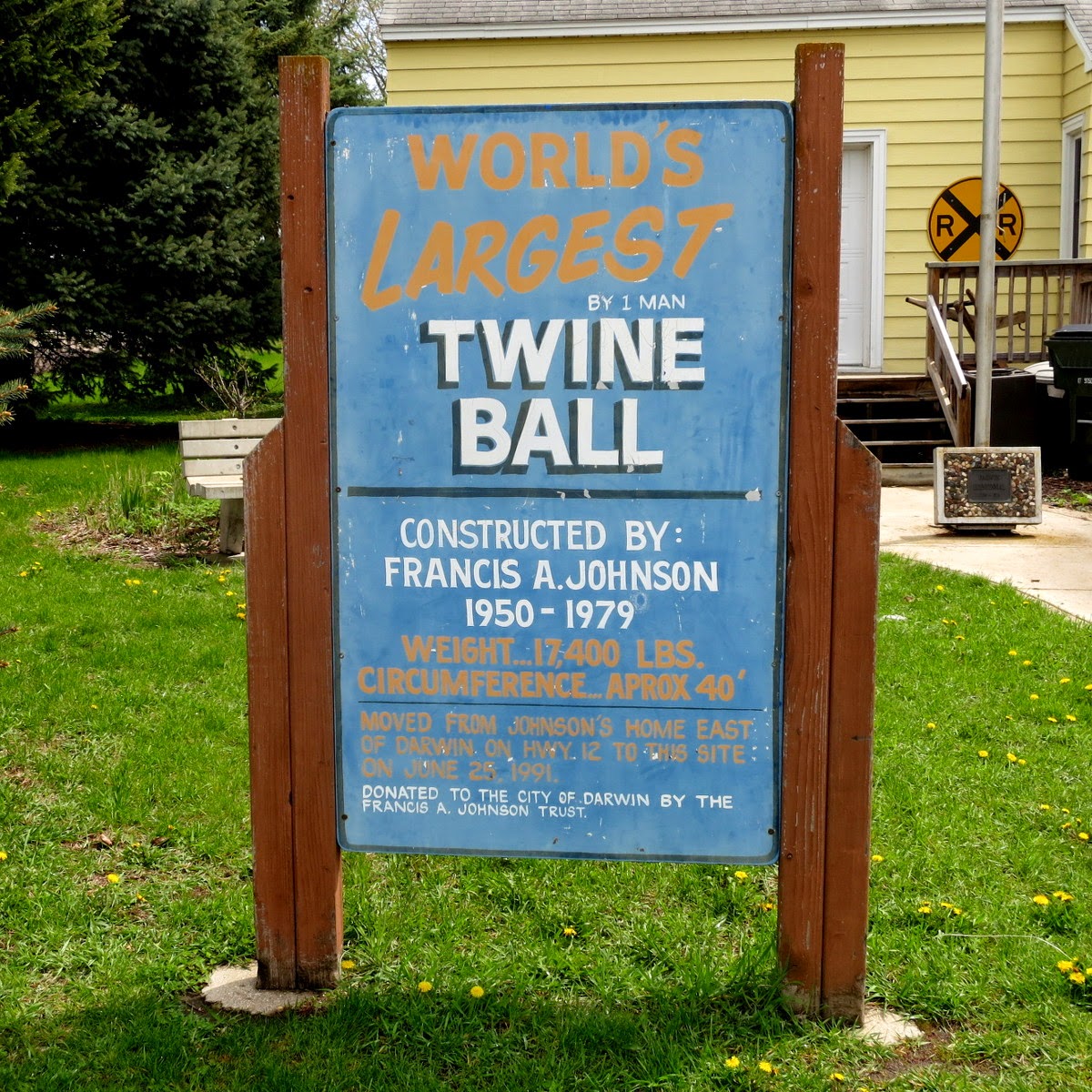 When I started planning for the Long Way Round, I looked all over the map and asked myself "what things do I want to be sure to see?"  I built a list, and mapped out all the possible locations.  I even mined the virtual lists on geocaching.com more more ideas.

I had a really good list, but something was missing.  It nagged at me for weeks... I was overlooking something obvious... something vitally important.

Then, like a bolt from the blue, it hit me, like the front grill of a '53 DeSoto.

I wanna see the biggest ball of twine in Minnesota.

'Cause it's the biggest ball of twine in Minnesota!

Suddenly the entire trip came into focus.  It had a purpose.  I was going to go to the mecca of Pointless America! (the thought being that, while America has contributed many vital and important things to the world, this isn't one of them).

So I added the twine ball to the list of must-see places, and even re-juggled the schedule to ensure we had an extra day to go see it.

So I loaded up Weird Al Yankovics song on my MP3 player, tossed the wife and the kids into the Geovan Of Destiny, and headed down the road to Darwin, Minnesota.

The day we actually visited the ball, which was a Tuesday, it seemed like a dream.  I couldn't believe I was about to visit the monument, nay the epicenter, of all that is holy and pure with Pointless America.  Even the kids were excited.

Zeke would ask for the song to be played, and I was only happy to oblige.  We would sing along, and every once and a while you'd hear a little Abigail voice from the back singing 'sota!  'sota!

So when we arrived we all piled out of the car and rushed over to see the majestic sphere, which sits under a makeshift pagoda.

We came to see the biggest ball of twine in Minnesota!

Then we saw the biggest ball of twine in Minnesota! 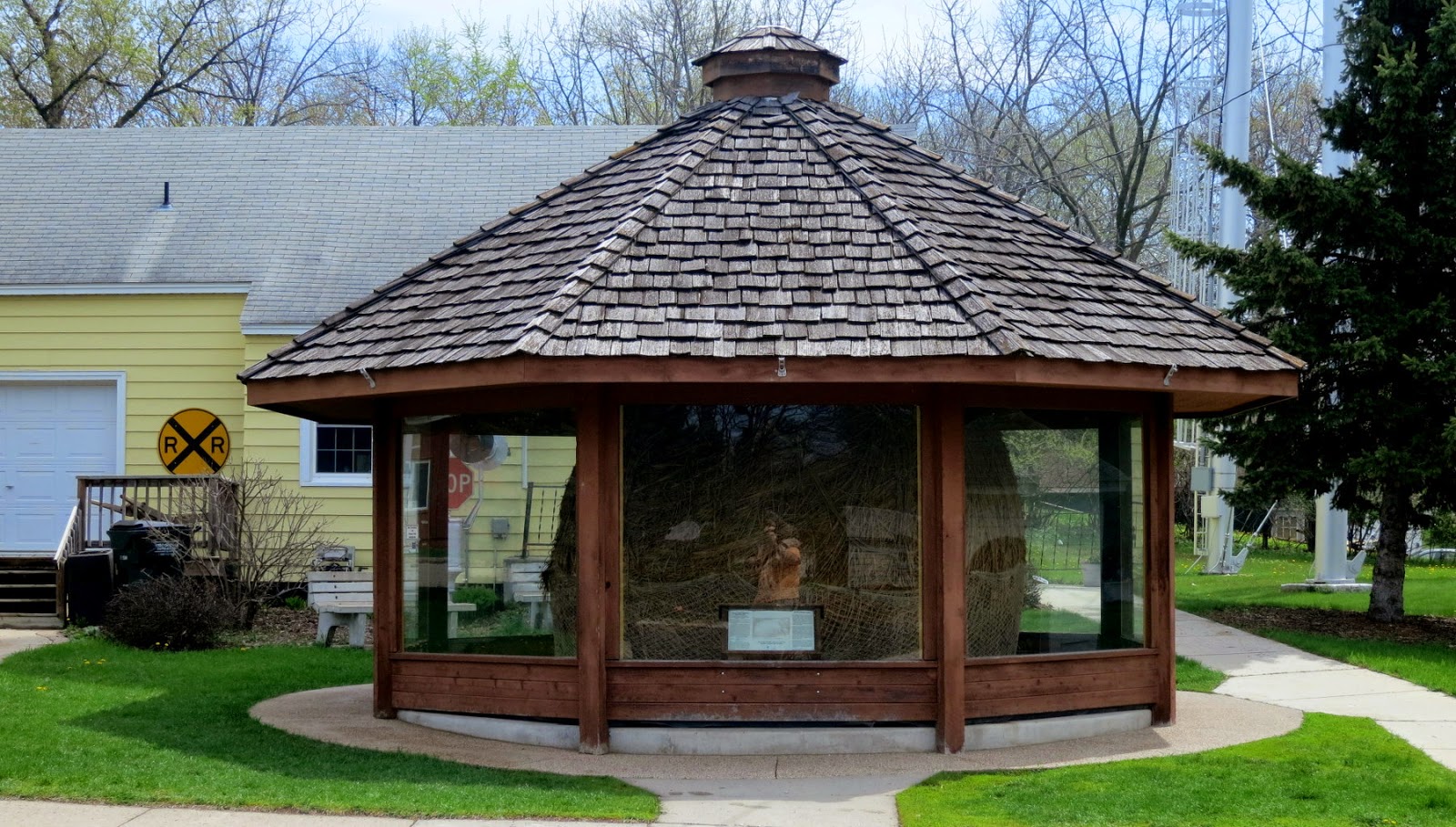 There were two things that immediately went through my mind.  First was "Oh man, I can't believe I am here, and this thing actually exists!" and "Jumpin' jack rabbits, that is some seriously reflective glass they put around that thing!" 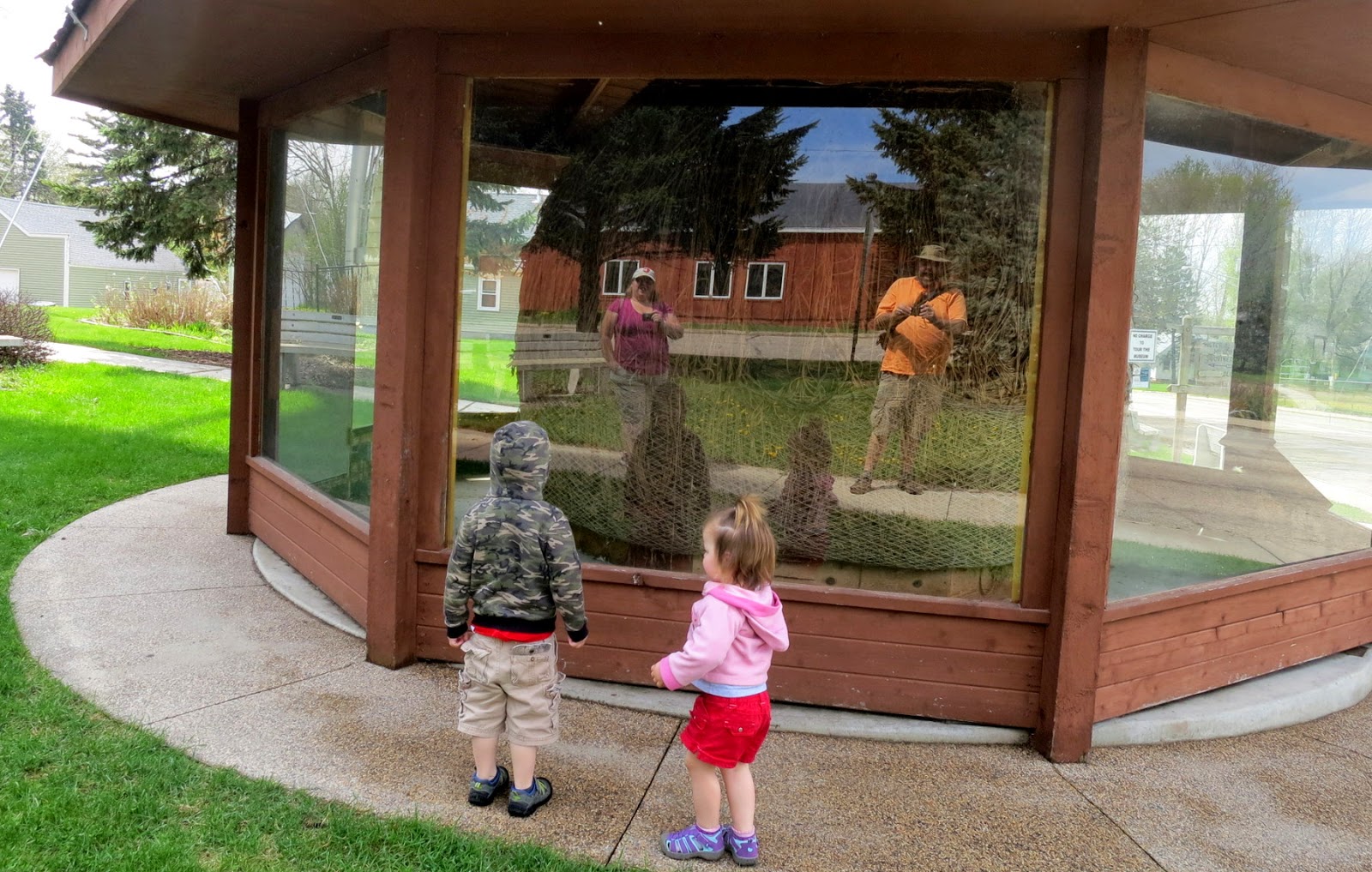 The kids did like the ball, tho I think they liked their reflections better ;)

Seriously tho, no idea how they got such highly reflective glass.  I didn't think such a thing was possible (but it is!).  There was no angle I could find that allowed me to take a clear shot of the twine ball without taking an impromptu selfie, unless I got right up close to the glass, in which case I could not get the entire ball in.

As a result, this is the best shot I could get of the ball itself: 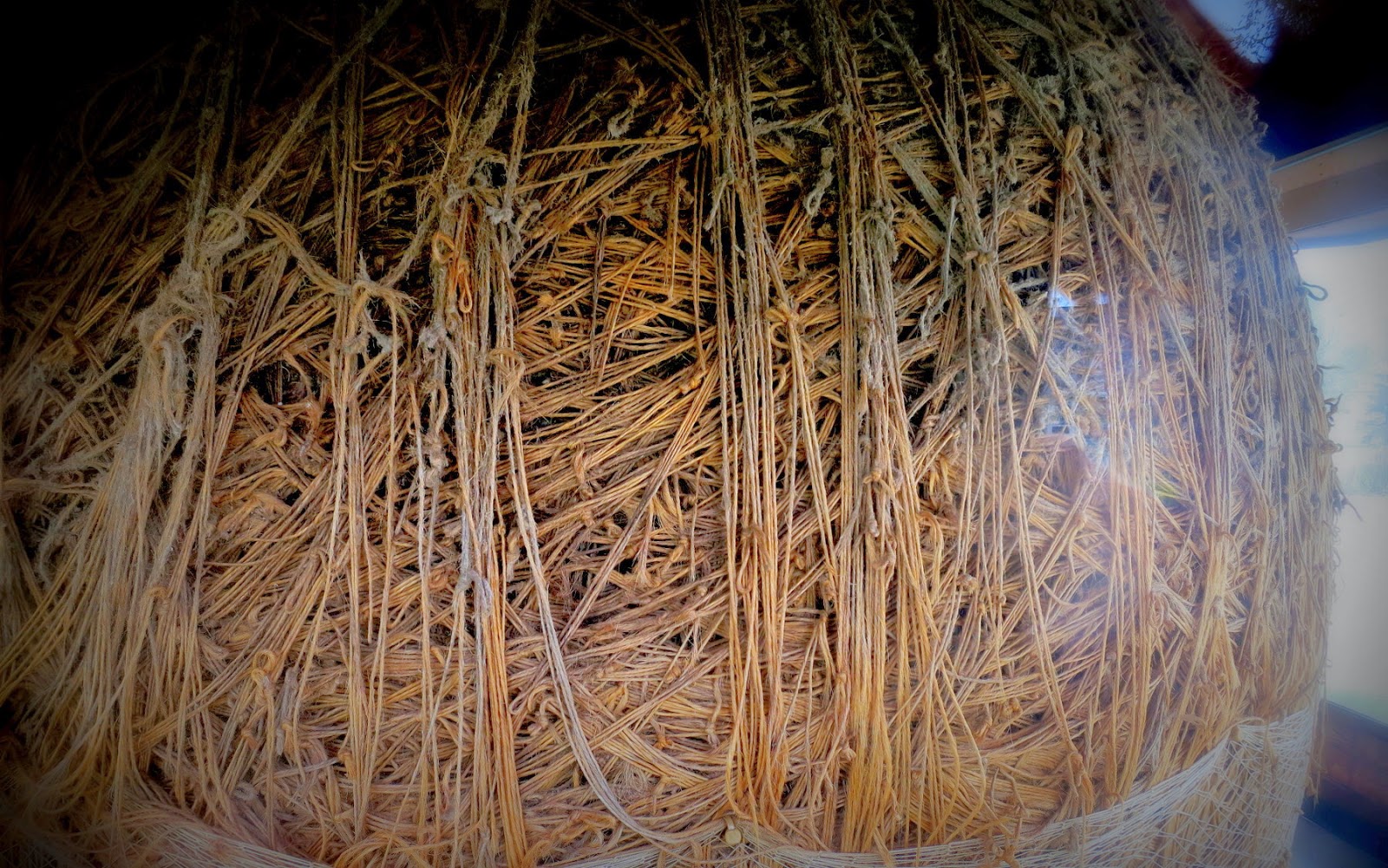 So, some stats:  The ball is about 12ft wide, weighs 17,400 lbs, and contains a metric crap-ton of twine.  It took 29 years of daily winding to get it to its present state, starting in 1950, by Francis A. Johnson.   Since he also died 29 years after he started it, one presumes the ball is not the embodiment of his final vision (or, my pet theory, he was bat-crap insane).

Either way, it stands as the largest ball of twine in the world that was created by one man.  Apparently there is a bigger ball in Kansas made by committee, but I discount that other ball, cause nothing good ever came from a committee.

The town of Darwin, lucky host of the twine ball, has built a museum, and I was happy to note that the Twine Ball Inn exists across the street, just like the song. 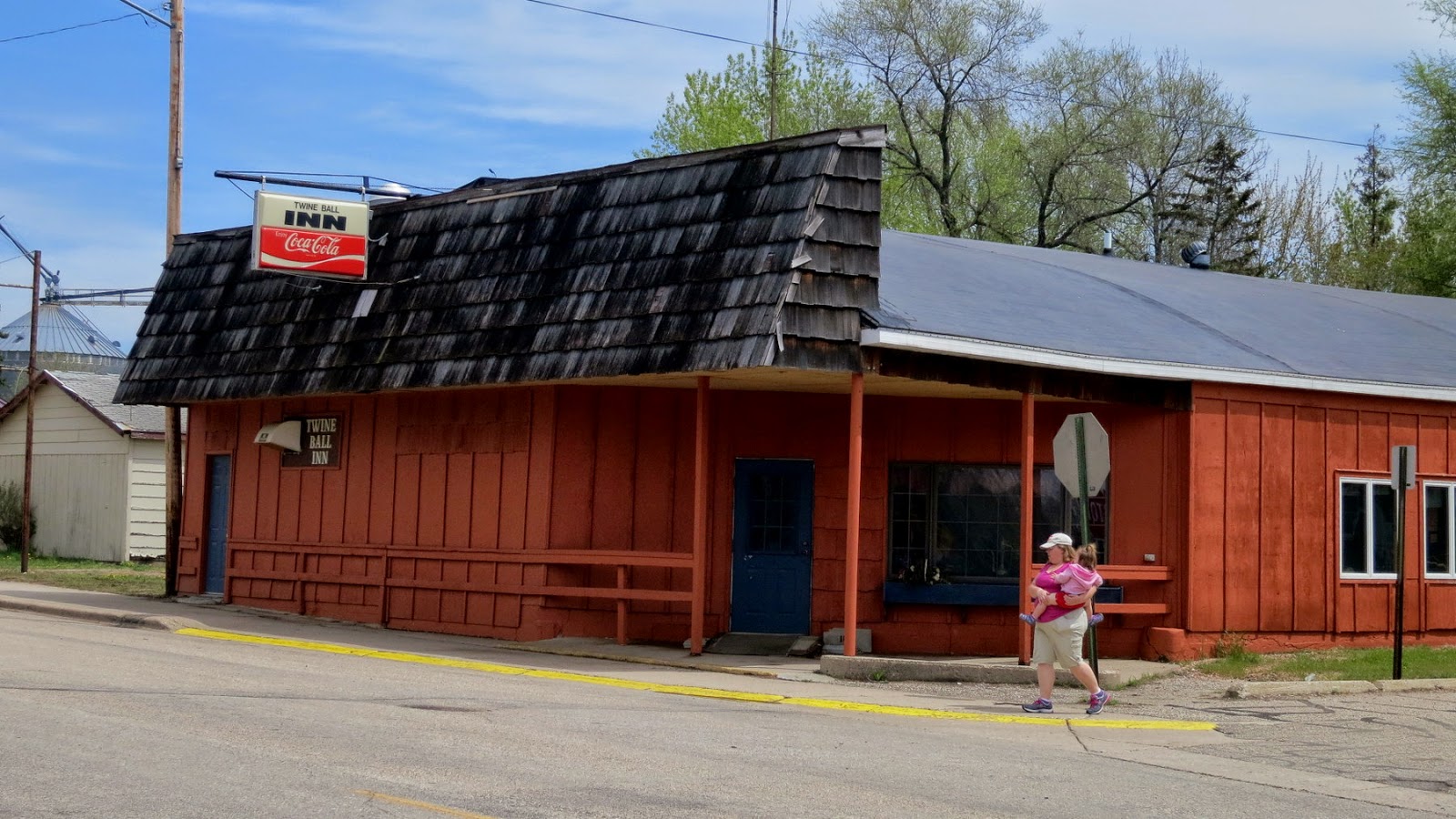 By the time we finished admiring the ball, and singing the log on the nearby geocache (strategically designed to be my 2900th find - yay milestone), it was getting closer to lunch time. So we headed across the street to a family restaurant called A Blue Moose Grill. 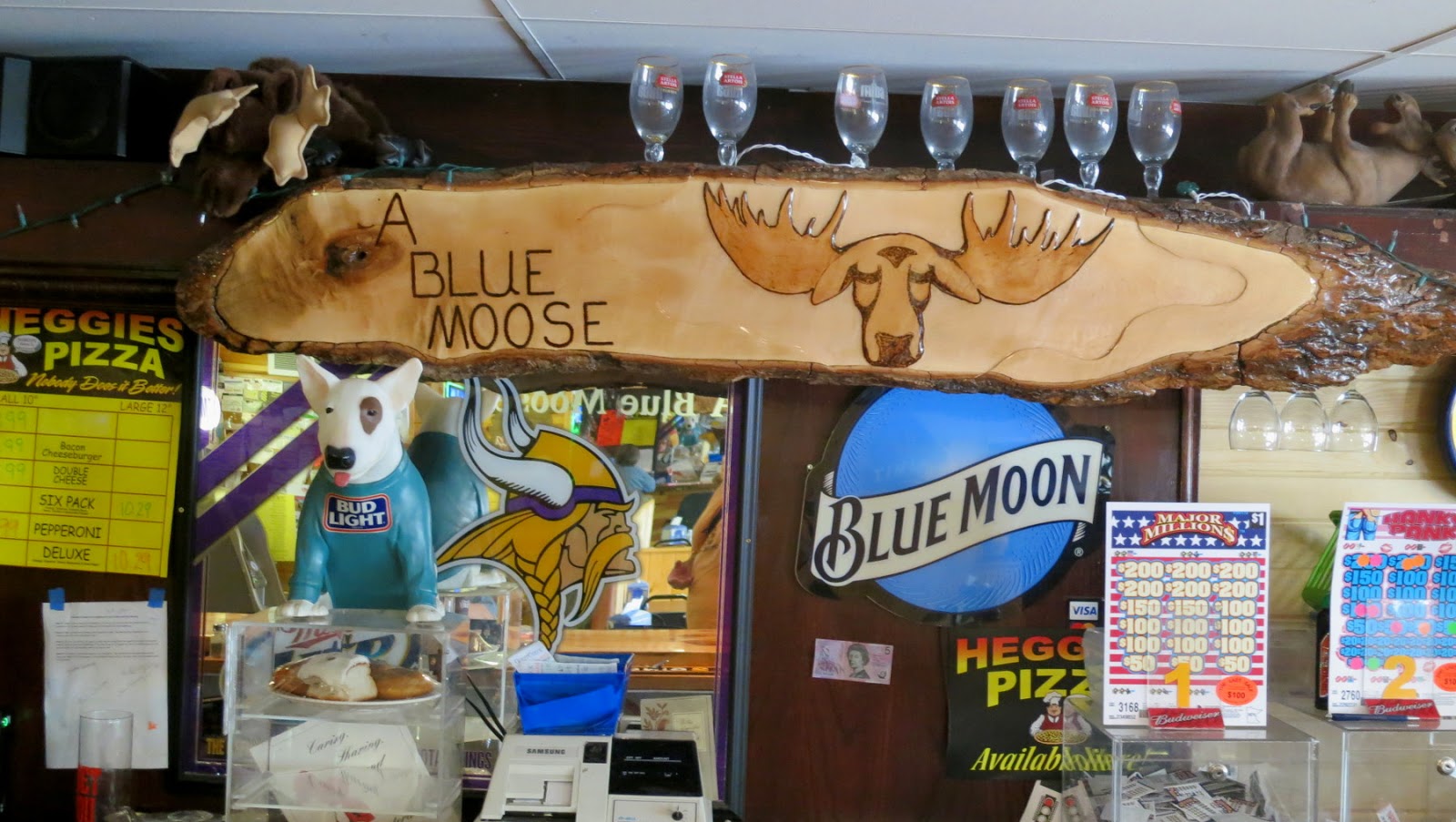 When we placed our order my wife asked for an extra plate (for the kids to share their meal), and the waitress/owner replied with a  "you betcha!", which is about as Minnesotian as can be (based on my years of listening about Lake Wobbegon on A Prairie Home Companion), which made me happy.  It also gave me the "we're not in Kansas anymore" feeling, mainly cause we didn't come from Kansas, and we had a vastly superior twine ball right outside the door.

On the way home we stopped by a really nice rest area so the kids could run around, and I could find some more geocaches.  One of which was this really cool tribute cache to the biggest ball of twine:

This was a nice ending to a day filled with twine ball appreciation activities.

So if you find yourself bumming around the upper mid-west, and you are getting bored, there is only one place you gotta go'ta.  Its the biggest ball of twine in Minnesota.

You should see the biggest ball of twine in Minnesota!
<== Viva Wisconsin | Get Lost ==>
Posted by Dave DeBaeremaeker at 7:22 PM