Long Way Round: The Day The Music Died

The following post is one of many that documents the adventures of a family of bears as they turn a 10 hour road trip into a week long adventure while on their way to GeoWoodstock XII in St. Charles Missouri. If you are not up to speed, check out the introduction here.
"A long, long time ago
I can still remember how that music used to make me smile
And I knew if I had my chance
That I could make those people dance
And maybe they'd be happy for a while" 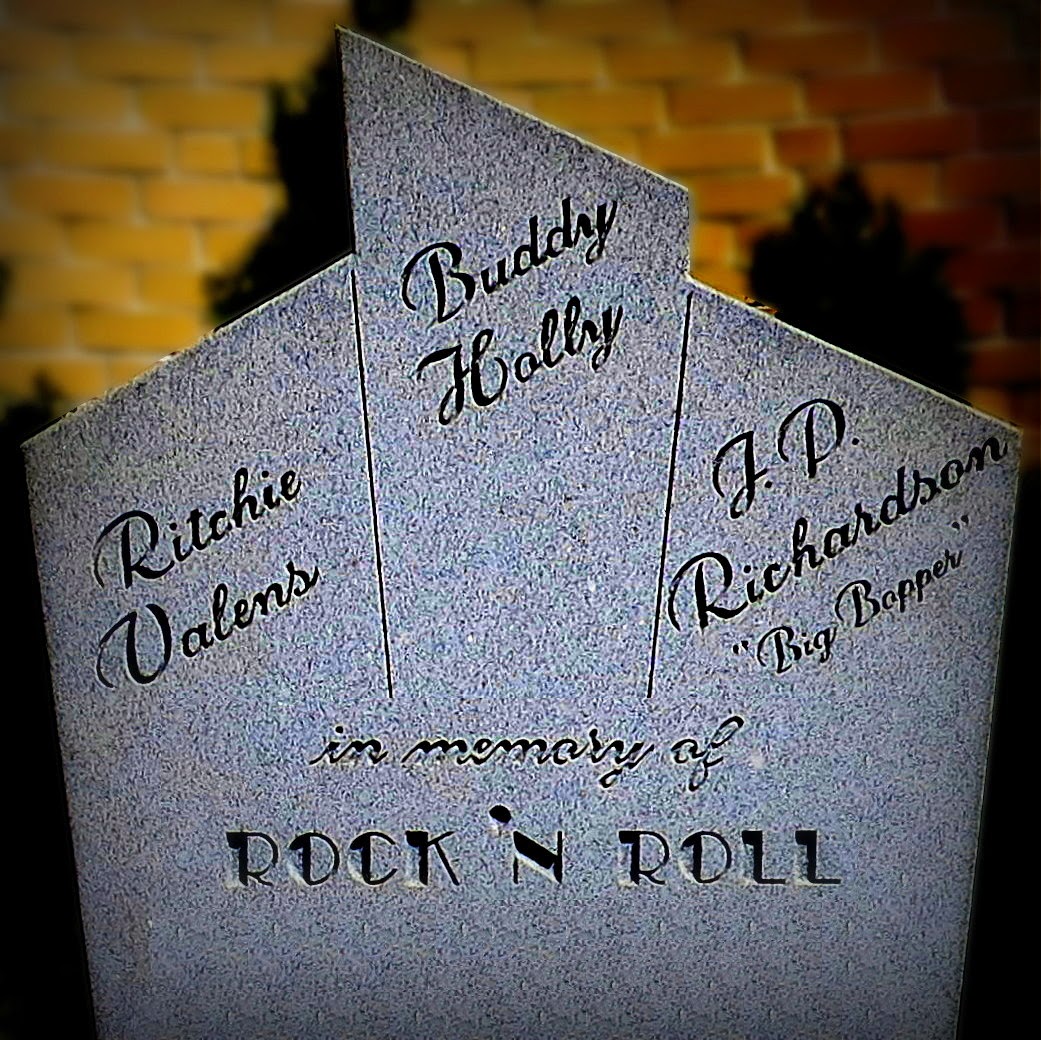 On February 3rd 1959 Buddy Holly, Ritchie Valens, and The Big Bopper, fresh from a concert at the Surf Ballroom in Clear Lake Iowa, took off in a small airplane into a snowstorm.  A few minutes later the plane was spotted going down.

A search party was sent out at first light, and it was soon confirmed that the plan crashed in a cornfield, and all hands, the three musicians and the pilot, were killed.

This whole story (the historical one, not the one in this blog) is captured, poetically, in the immortal song entitled American Pie by Don McLean.

Today a memorial stands in the cornfield where the plane went down.  During this road trip we had the chance of making a pilgrimage to this famous location and pay homage to the forefathers of rock'n'roll (and to also claim the two related virtual caches).  This was a chance I could not pass up.

We parked on a lonely gravel road at the edge of a farmers field.  A dirt path followed the fence line, around the edge of a cornfield, 4/10ths of a mile to the site. 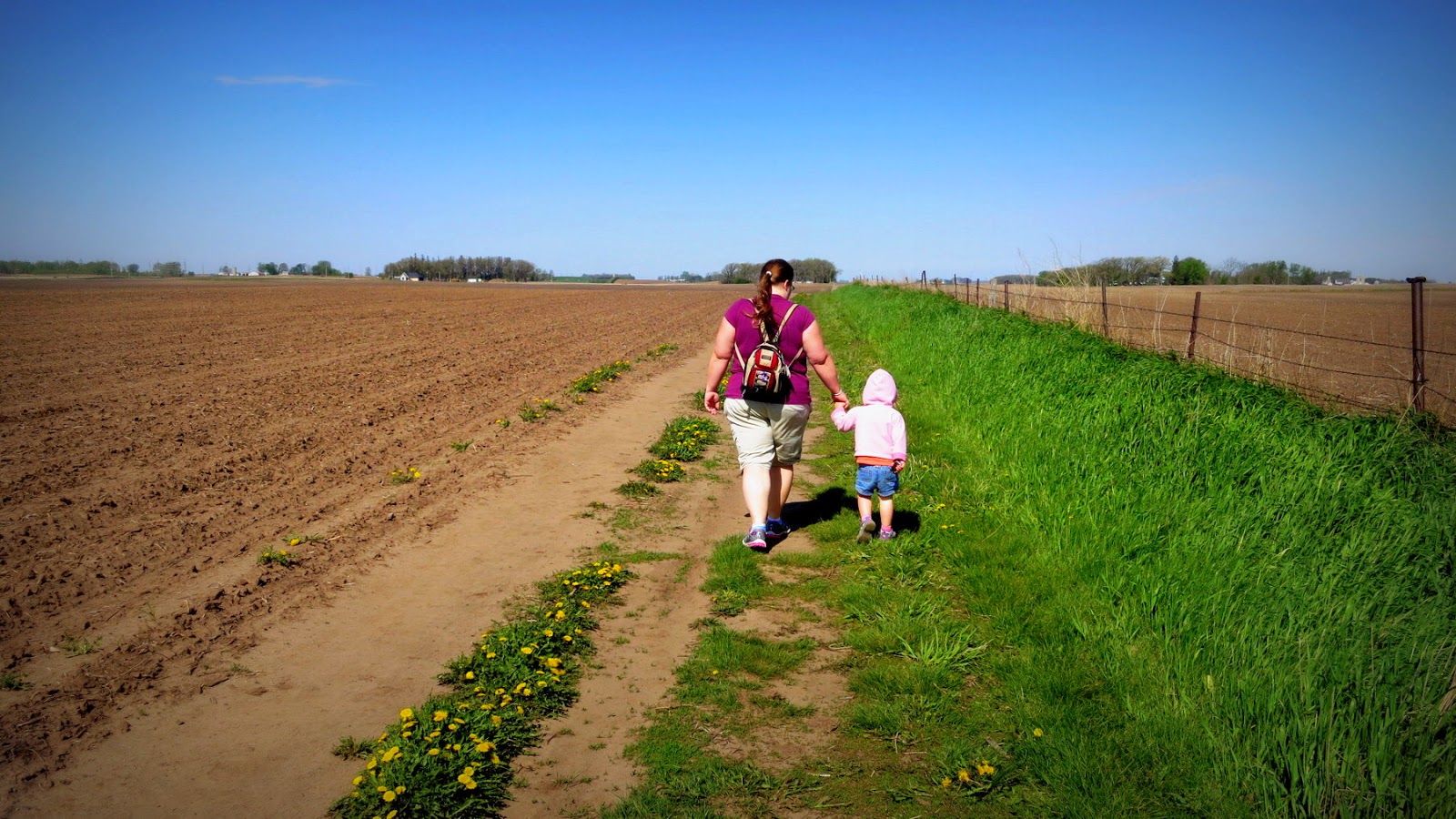 The memorial sits along the same fence line, and is very appropriate considering the musicians involved. 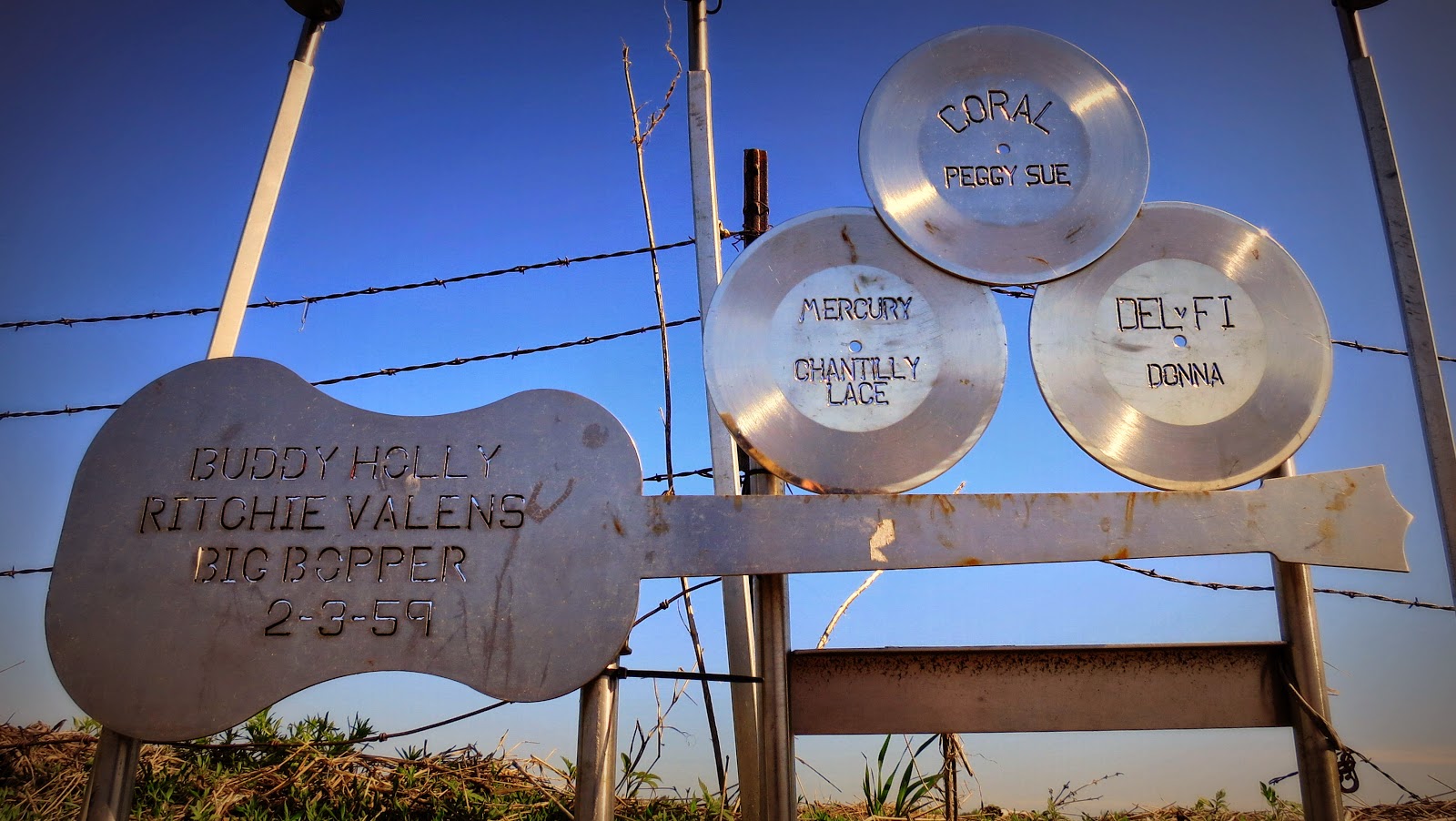 Nearby is the memorial to the pilot.  For some reason I cannot figure out, people have been leaving used cards there: credit cards, gift cards, hotel cards, student cards, etc. I am sure it means something, but I have no idea what it may be.

"Oh, and there we were all in one place
A generation lost in space
With no time left to start again" 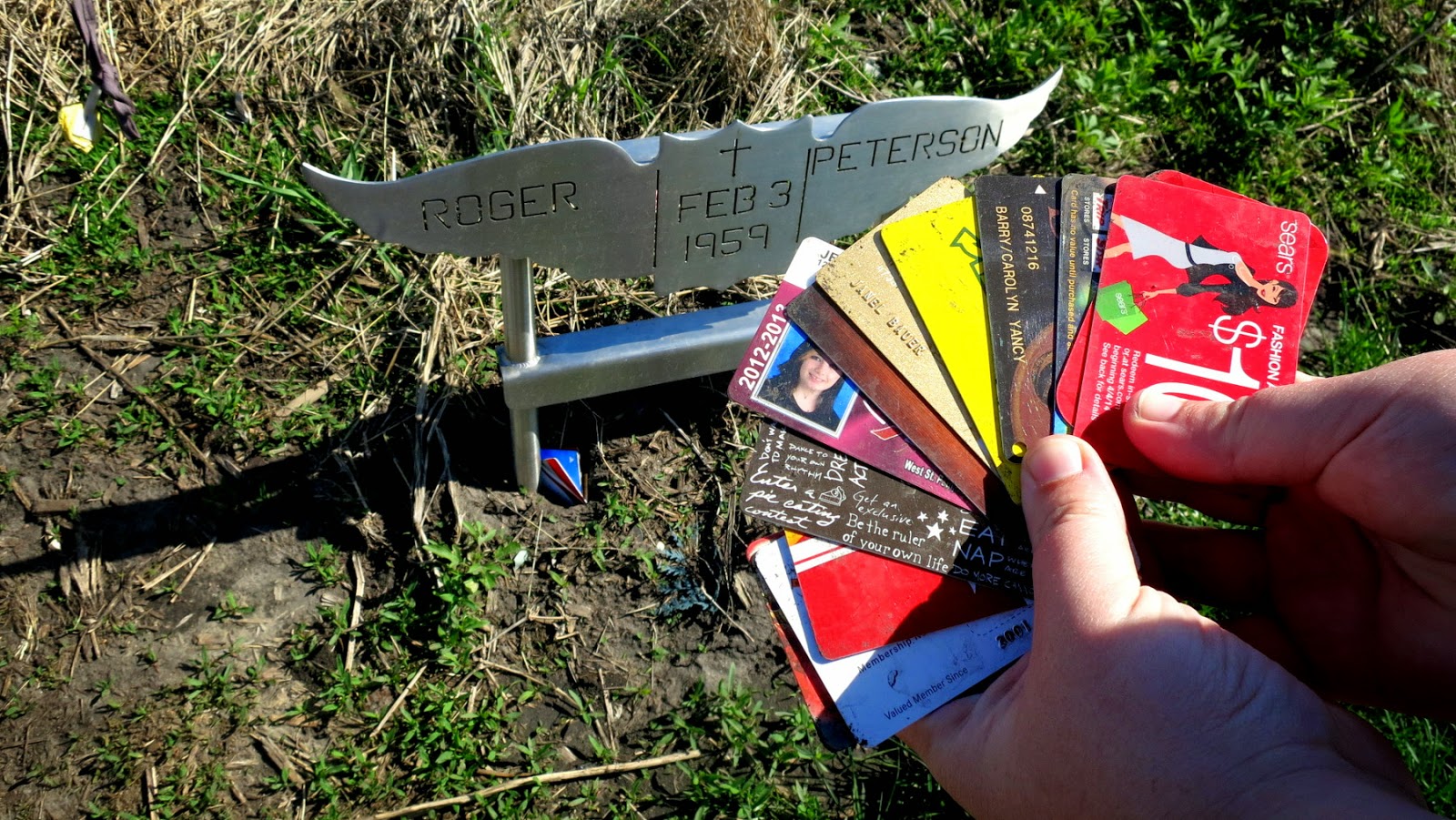 "And in the streets, the children screamed
The lovers cried and the poets dreamed"

The kids, of course, have no idea that this is a memorial, but they did understand that what they were walking on is a gigantic sand box, which they made good use of, much to the squeals and delights of the youngest. 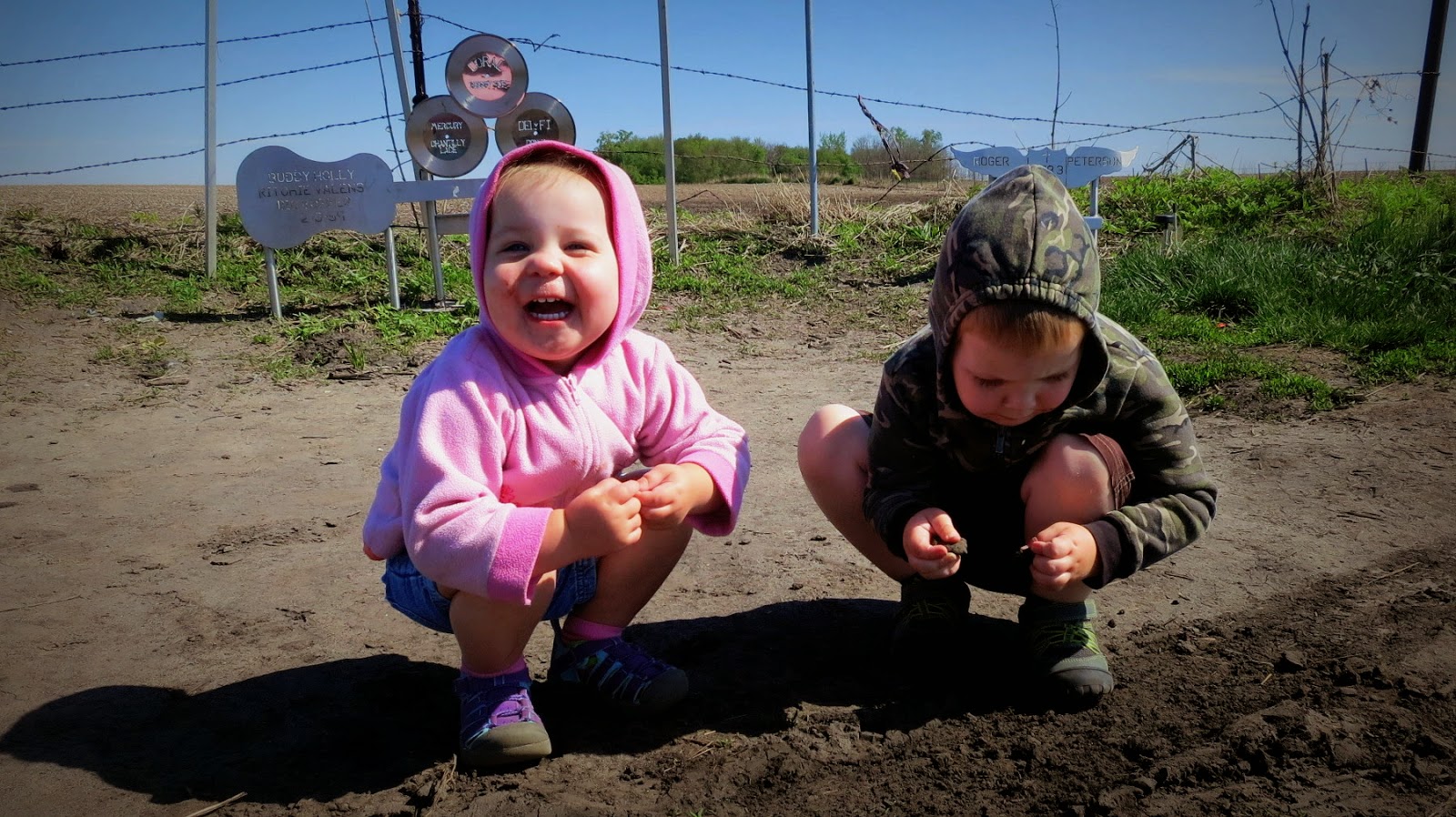 One of the best things about geocaching, and going on adventures, is coming face to face with history. This, more than most, was an amazing journey back to an important point (literally and figuratively) in music history.

As we drove off from this site, as an homage, we played American Pie a few times on the radio.

"We started singin' bye-bye, Miss American Pie
Drove my Chevy to the levee, but the levee was dry
Them good old boys were drinkin' whiskey and rye..." 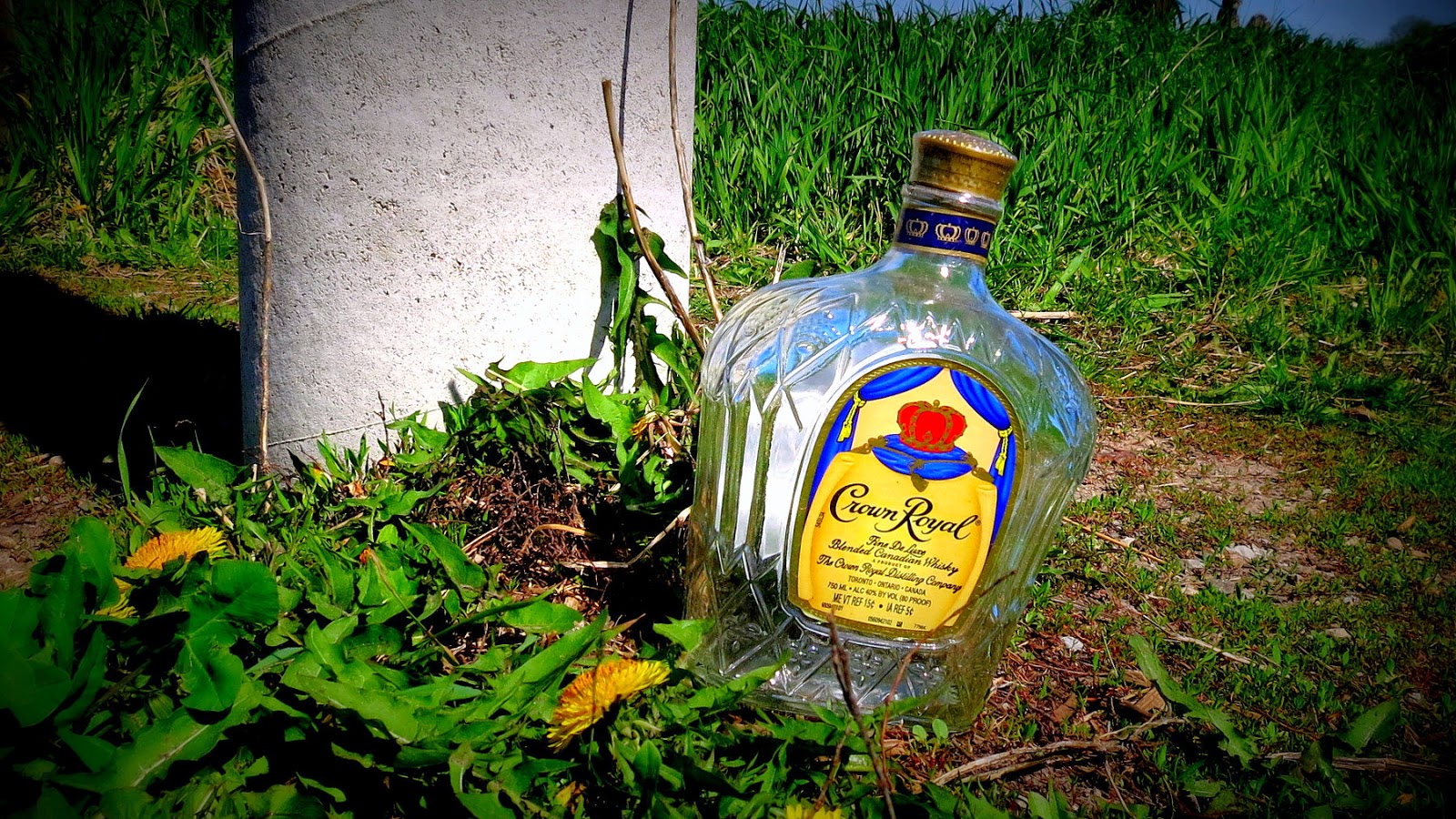