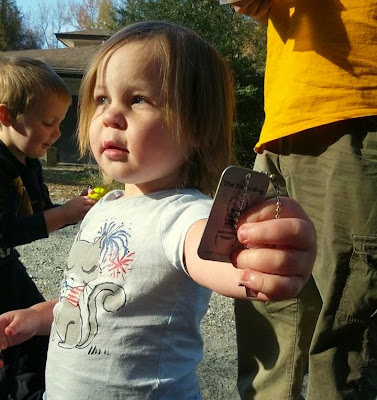 Last Saturday we had no plans.  None at all, and it was going to be glorious.

Then my wife suggested Ikea, and it was no longer gloriously plan free.

However Ikea is not a store that makes me want to instantaneously slit my wrists by spending a couple hours shopping in - and it has edible food - so I agreed.

To be fair, I had a good time.  But still, I am a man, and real men don't shop, unless its a hardware store.  We purchase things, but we don't shop.

So after we escaped the commercialize hell that is the semi-enjoyable Ikea shopping experience, I needed a place to unwind and clear my aching head and delicate sensibilities.

This is all to say I ended up finding a pretty cool little park in the middle of Charlotte North Carolina, called Reedy Park.    This is the story of our time spent geocaching in Reedy Park.

It started with a family photo at the sign of a bird.  Note that Zeke isn't screaming.  He is simply posing for a photo with his mouth wide open because... he's five. 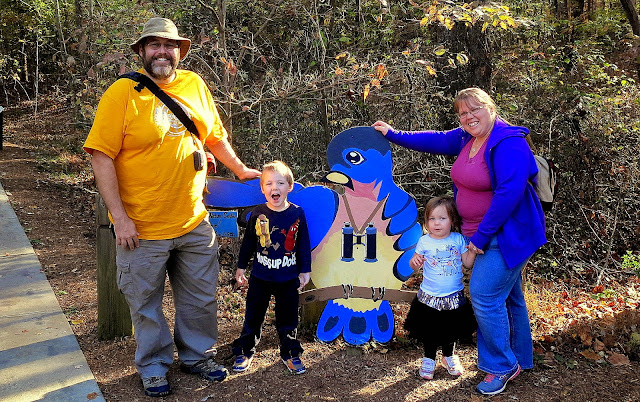 The first cache was located in a humming bird feeder (hummingbirds not included).  The kids traded for some swag (a ring with a fake jewel in it, and a baby Shrek figure). We also grabbed a couple travel bugs, which is (vaguely) interesting for reasons I will get into later, at the appropriate time. 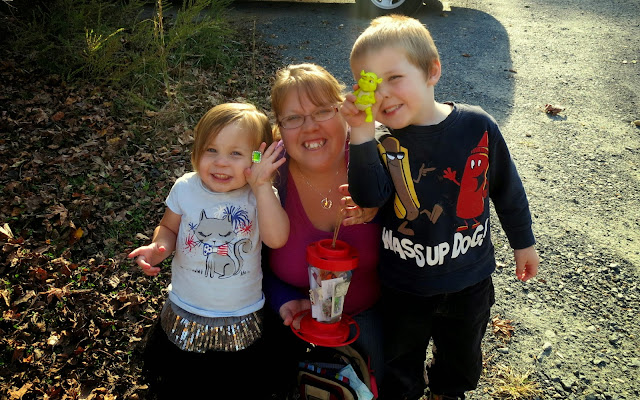 Basking from the success of our first geocache find, we headed off to the next one, a mere 528ft away.  However, we also immediately took the wrong trail (for reasons I can only describe as "Ikea Fatigue"), so that 528ft hike ended up being well over a mile.

Here is a picture of my wife and daughter to distract you from the previous illogical sounding statement. 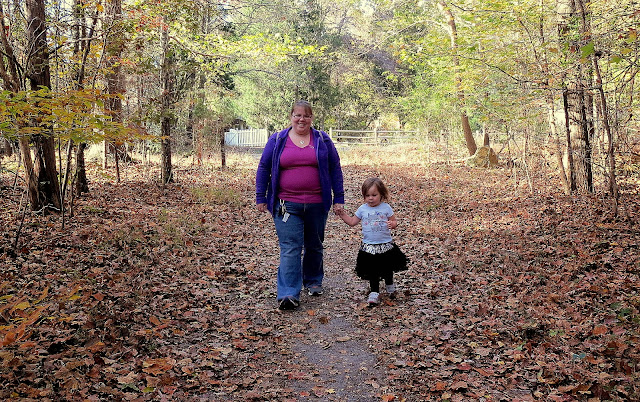 Now you may be asking yourself why it took a mile to correct my oversight.  I will tell you, but first I will distract you with a photo of my children climbing rocks along the trail, having a grand old time. 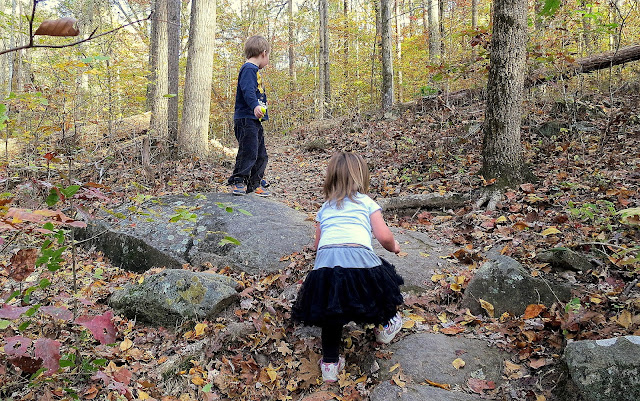 So the trail was a large loop, and we planned on doing several caches along one side of that loop (the other side being annoyingly geocache free), so we simply walked the loop, and tackled the short series of geocaches from the far side. 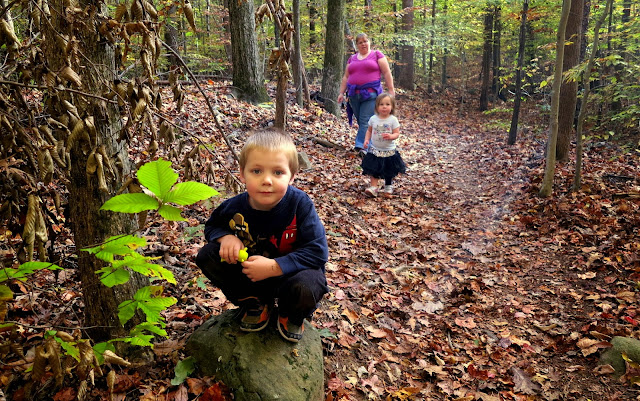 I hope you are as satisfied with that explanation as my daughter was by sitting on this rock.  Sitting on rocks is fun, especially when you are two years old, and the rock is gigantic in comparison, because you are the size of a two year old. 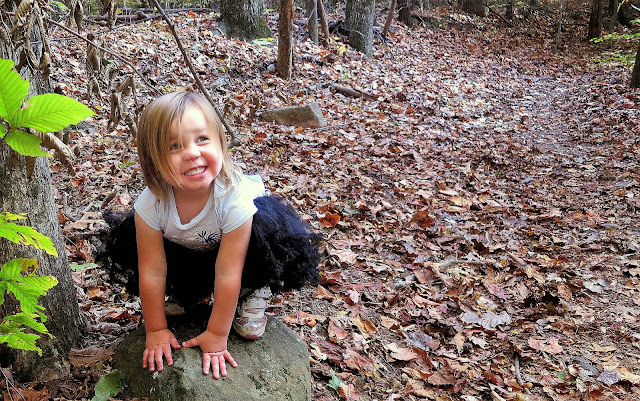 Along the way I learned something new.  There exists an animal called the worm snake.  Which is exactly as it sounds: a snake that looks like a gigantic earth worm.  The one we found was dead, but we looked at it anyway, because nature is awesome. 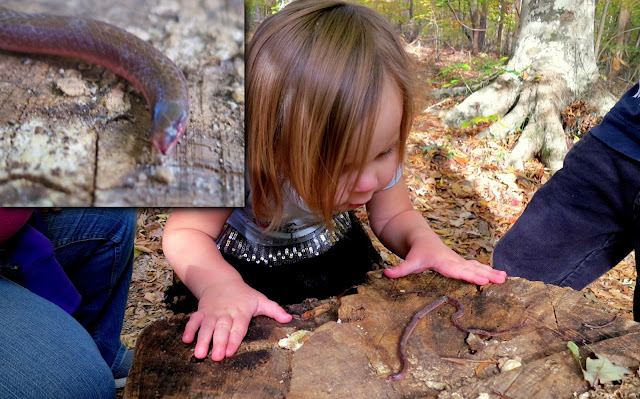 At the last geocache we ran across two cachers at ground zero, who were also hunting for the cache. We joined in, and Zeke actually made the find.

So remember those two travel bugs we found at the first cache?  It turns out that the cachers we met at this cache dropped the travel bugs in the first cache.  So it was kinda like completing a circle, literally and figuratively (I wasn't kidding when I said 'vaguely', eh?) 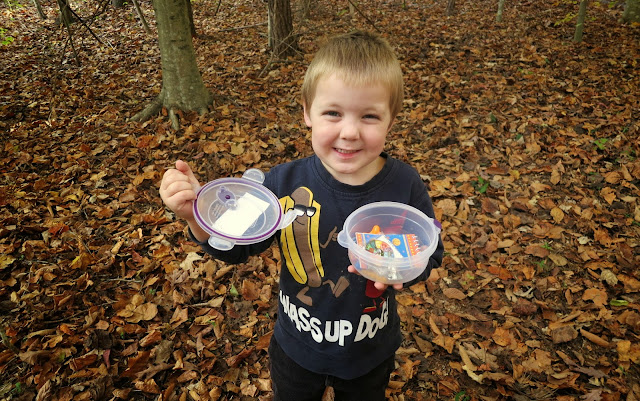 So that is my post-Ikea-pocalypse escapades with the family to a cool park in Charlotte.  The staff of Only Googlebot Reads This Blog appreciates your reading this post. We know you have a choice in the blogs you read, and we thank you for choosing ours.

There will now not be a test to verify you were paying attention.

There are many more trails, and many more geocaches, in the park, so the odds of us returning are high.  If we do, you will read all about it here.
Posted by Dave DeBaeremaeker at 10:56 PM