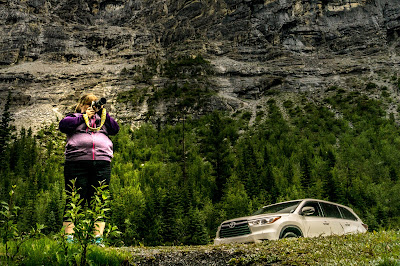 Welcome back! Apparently I did not do enough last post to scare you away from reading my blog by showing you awesome scenery captured poorly of the mean mountains in Alberta.

I shall attempt to do better this time.

Prepare yourself.  Its gonna get chilly up in here.

So our adventure has brought us to the Columbia Icefield Discovery Center, which is the best of nature mixed with the worst of humanity, all rolled into one giant Cinnabon of awesome agony.

Agony because the crowds, oh my sweet lord the crowds.  90 minute waits at the restaurants, all full of tourists (there are few things worse than tourists - and yes, I realize I was one at that point. Luckily years of listening to Nirvana has prepared me well for self-loathing and living in denial).

Awesome because, well, the view off the front porch:

If you have more money than sense, you can go out on a special tour bus and go out on the ice, but I grew up rural Canadian, and my wife is genetically dutch, and a farmers daughter, so we balked at such extravagance.  One can also walk almost up to the glacier, which is free, so what we did.

For a sense of scale, this shot was taken with a good 1/4 mile between me and the ice.

It is a tad largeish.  It was also a surprisingly tough hike.  It was only a quarter mile or so from parking to the overlook area, but it was at 6500ft elevation, the path went steeply up hill, and I am a lazy fat guy, so we took the advice on the signs to "take things slow" and "don't kill yourself." on the way up.

Once we got our fill of ancient ice, we moved on up the parkway a ways and stopped by this waterfall. 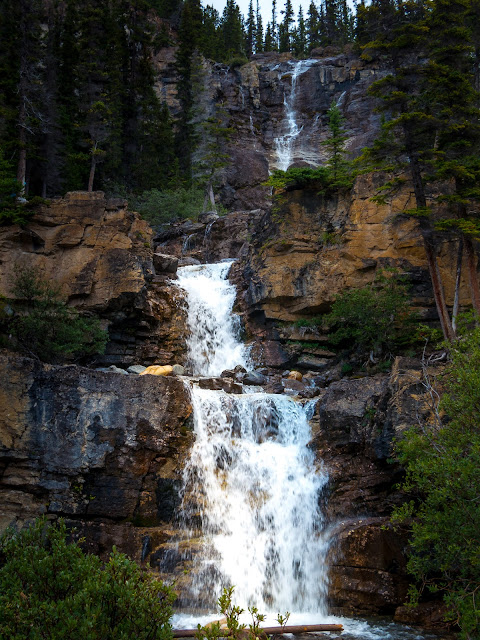 While I was waiting for tourists to stop climbing on these falls so I could get a shot, I witnessed another awesome tourists at work.  So there was this father - 50s, say, as a rough guess, start to climb out on the rocks in front of the waterfall - ya know, to get close... cause what could happen?  He was clad in a wind breaker, dress pants, and cheap dress shoes.  As he inched closer to the water over slippery wet rocks (cause it's a waterfall, also it was raining), he beckoned for some ladies, which I assume is his wife and teenage daughter, to come with him. Insisting it was safe - I mean, this is nature - what could possibly go wrong?

Seconds later he flipped out and landed in the water, landing rather ungracefully on his side.  He was unhurt and... awesomely... kept beckoning the ladies to come, cause what could possibly go wrong?

The ladies refused.  Those are smart ladies.  Dude was dumb as the rocks he landed on, but the ladies: quality minds at work.

Anyhoo, we kept going, as one does on a road trip, and soon ended up at the Athabasca Falls, where we saw... water falls!

The park was actually kinda cool a they had trails, and a bridge, that one could get quite close to the water fall, and really feel the power of the water... um... falling.  It was very impressive. 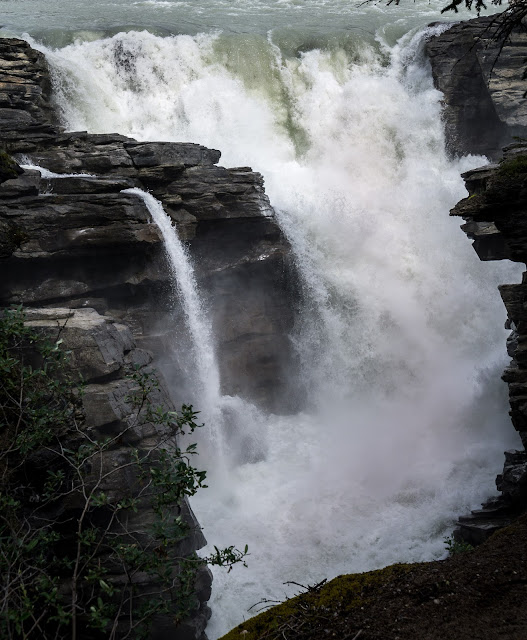 We moved on and soon ended up at the end of the Icefields Parkway in Jasper.  Our hotel was still an hour down the road, and at this point my wife was busy arranging (yay Project Fi and international data roaming!) a meet up with some Scavenger friends for supper near the hotel, so we now had a deadline, so we moved on quickly. 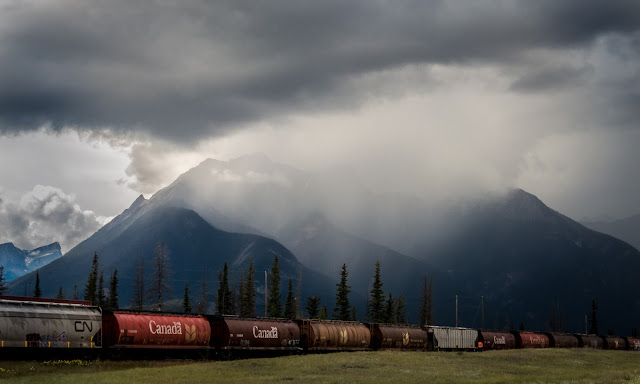 ... and a couple klicks down the road, this shot:

So I decided road construction season wasn't so bad after all.
Posted by Dave DeBaeremaeker at 11:36 AM