Todays word is fire. This is the shot: 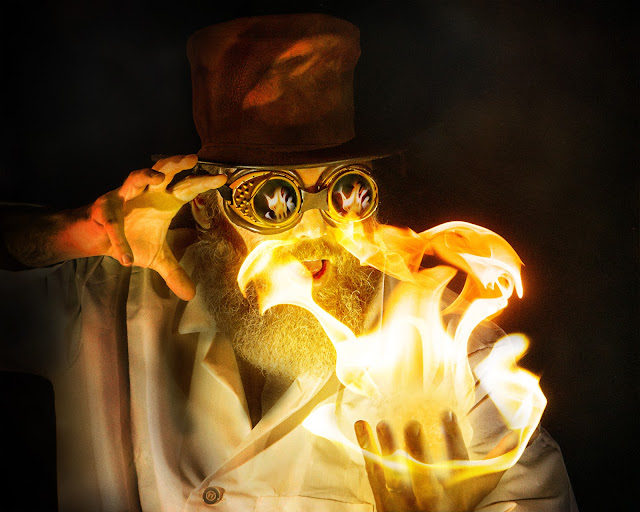 The idea for this one came pretty easily:  a self portrait of Yours Truly (which, if you think about it, who else would be in a self portrait I created?) as a wizard type conjuring fire in my hand.

The idea is the easy part.  Actually doing it is something else.  That took a lot more time to figure out.

Since I wanted a fire ball in my hand, it logically follows that I needed a picture of a ball of fire.  It is a pretty easy recipe. 1) make a ball. 2) set it on fire. 3) take a picture.

This is the point where, if I had forethought, I'd show you a picture of the setup I used to capture a photo of a ball of flame.  However I lack forethought, so I'm going to force you to use your imagination.

I took a ball of cotton fabric, about 3-4" in diameter, mounted it on a 2ft wire, and set it up in the backyard.  I then waited for dark (which is the hardest part).  I had my camera on a tripod, with a fast shutter speed (1/1000), and a remote trigger.  Then I doused the ball in isopropyl alcohol, set it on fire, and clicked the shutter like a mad man.

My lovely wife helped,  especially by holding up a reflector to act as a wind break.

Eventually I ran out of alcohol, and switched to Zippo lighter fluid. The flames from the lighter fluid worked much better for my purposes.

After about 30 minutes of shooting, and many cycles of adding flammable liquids to a fabric ball and lighting it on fire, I got hundreds of shots, some of which showed promise for being useable. So I decided to call it an evening.

Also, I ran out of flammable liquids.

The cool thing is that after all that fire, the ball of fabric was barely singed. 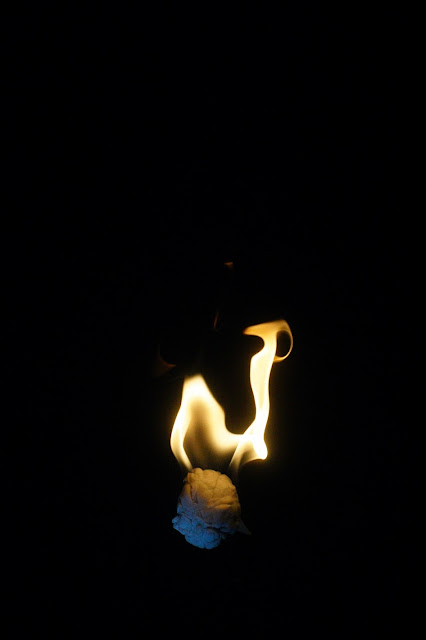 So I went inside, ordered some more flammable liquids from Amazon, then looked thru the images I captured.  Indeed some looked promising. Mission accomplished.

The selfie was taken in my basement. I used black felt as a back drop, put on a leather top hat, steam punk goggles, and a lab coat (for which to make myself look more sciency-wizardy-quirky-dude-like), and posed myself dramatically.  To simulate the light from the flame I put a Lume Cube in my hand.

It only took a few tries to get something I could use. 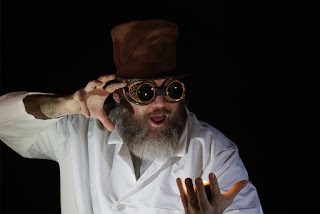 Putting It All Together

All that remained is to take a select few fire shots and put them on my self image.  This was done with basic composite techniques, with special emphasis on bringing out the highlights, as fire is a harsh yellow light.

Now I can conjure fire in my bare hands.  I have proof.

In the real world I'm just a dude.  In Photoshop I am a wizard.  Wizards are cooler.
Posted by Dave DeBaeremaeker at 5:33 PM

Very cool, Dave. I like following your train of thought.

I love that both you and Mark R. took pictures of fire to use in your compositions. Great shot you wizard, you!