Round 25 Deep Dive: Green and Yellow

These are not the strongest images I created for the hunt, but they share the same concept, and that is the interesting part.

So for someone like me who shoots a lot of super hero action figures, the exact moment I saw "green" in the word list you can imagine my thoughts went immediately to the Incredible Hulk.  However I needed an idea of what Hulk could be doing.  Basically I had a noun, I needed a verb.

I spent some time (read: weeks) thinking about this using my various mind mapping techniques. While things were percolating in the dark recesses of my brain, I happened to watch Thor: Ragnarok.  In that movie Hulk fights Thor.  This sparked the idea that I could recreate an image where Hulk from Ragnarok could fight something.  I didn't want to use Thor, cause that has been done.

Then the idea of using Hulk Hogan sprung to mind.  I loved the idea of Hulk vs Hulk.  The pun is great.

For a setting I decided to set it in the same arena from the film.  Literally.  I used screen grabs from the relevant scenes from the movie, cloned out Thor and Hulk, then added in pics I took of the Hulks. 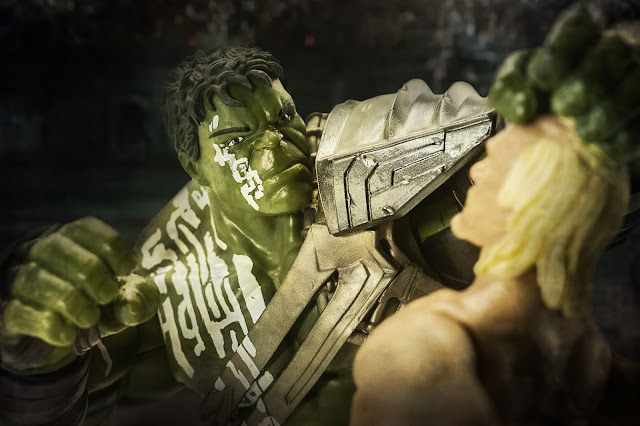 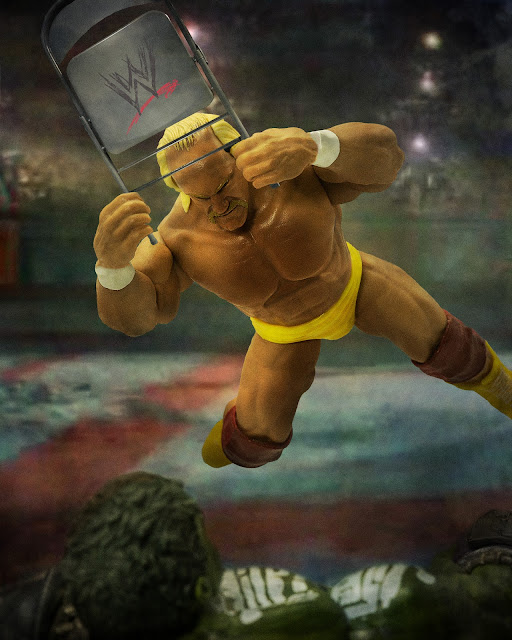 I also bought a folding chair, as pro wrestlers use them as their weapons of choice, and composited into Hogans hands.

I think these were marginally successful images, but if I was going to shoot them again, I would open up the depth of field so its more obvious that the "other" figure is also a Hulk.
Posted by Dave DeBaeremaeker at 7:32 PM