As mentioned previously, food words don't spark much creativity in me.  I'd rather eat food than create art with it.  So as you can imagine it took some time to generate any ideas.

I finally stumbled on the idea of a monster type eating a burger. This led to thinking about the scene in Return of The Jedi where the Rancor ate a Gamorrean Guard - you know, those pig looking things.

So I had the idea of Rancor eating a hamburger with a Gamorrean Guard in the middle of a bun.  So I ordered one one each.  When they arrived I decided that the Gamorrean Guard in a bun idea was more of a hotdog thing.  So I decided to switch gears and have Rancor putting ketchup onto a real burger.

I built a set in my light box with sand for Rancor to live in, bought a Wendy's Junior cheeseburger, and set up the scene.  The ketchup on the burger is real, but the ketchup bottle is a composite, because of a scaling issue.

I wanted to add some drool to Rancor, cause he seems like the drooling type.  I recalled watching a documentary on Hollywood special effects several years ago.  In that documentary it mentioned that the slime on the Xenomorphs from Aliens was KY Jelly.  So I grabbed some KY, and applied it liberally (as one does) to the teeth of Rancor.   I waited for the jelly to start dripping, and when it looked right, I took my shot. 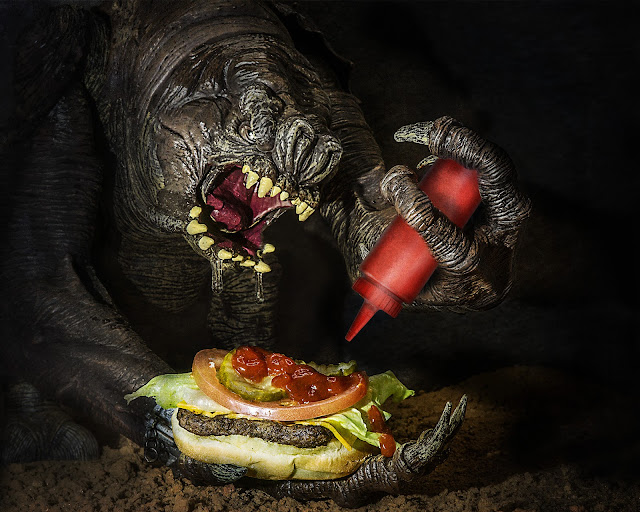 I regret not taking off the pickles.  Pickles are horrid.
Posted by Dave DeBaeremaeker at 8:14 PM