This is the image I am most proud of from this round of the hunt.  It is a food word, which doesn't tickle my creative side, but I managed to pull from a lot of influences and references to create something truly unique.  At least unique for work I've done previously. 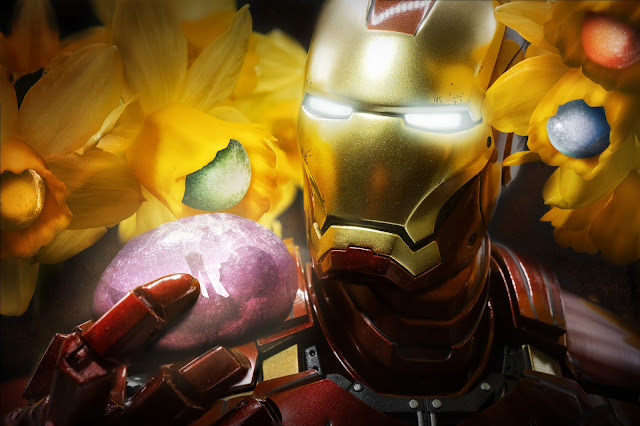 So for weeks I had no ideas for jellybean.  None.  Total bank slate.  Then I thought of breaking up the compound word into its components, jelly and bean.  Bean is, basically, a seed.  This made me think that I could make a jellybean into a seed.

To give it context I decided to have Iron Man discovering this seed, and examining it.  Why Iron Man?  Its simple - he's the only action figure I have that has articulating fingers, so he could hold a jellybean easily.  Sometimes my artistic choices are wide and vast, sometimes they are thrust upon me by scarcity.

So I set up a shot with Iron Man holding a jelly bean, and made it look like he was examining it.  I then decided that I needed some context... where was Iron man, and where did the bean come from?

Then the movie The Matrix popped into my head.  Remember the scene where the machines grow humans in metallic pods and harvest them for energy?  Well, I did.  It seemed like a good source of these seeds.

However I didn't like the robot overlord aspect.  Then I remembered some Star Wars cartoons that showed a planet full of super tall glowing plants.  Like this:
So I decided to use plants for my scene.  I headed to the Walmart garden center and looked for suitable plants.  Turns out daffodils were the answer.  I bought a half dozen, then arranged them around Iron Man.

Then I took photos of more jellybeans and composited them into the flowers so it looked like the flowers grew them.  I made them glow for that ethereal sci-fi effect.

Almost as an afterthought I added the fetus to the bean, just to sell the idea that those were seeds - using a human fetus to make it surreal, and maybe a bit shocking.

The rest, as they say, is history.
Posted by Dave DeBaeremaeker at 6:55 PM