Round 25 Deep Dive: Knife and Underwear

Knife throwing quickly came to mind.  I think I could have come up with a more creative concept, but with 26 words to shoot in 8 weeks, I needed to make some quick wins. So I shot my original idea of Deadpool throwing a knife at the viewer.

So I put Deadpool in the most dramatic pose I could, and composited a knife into the shot, using motion blur to give it motion.

The only real tricky part was getting a knife that looked right from that angle.  I tried several knives before settling on this bowie knife. 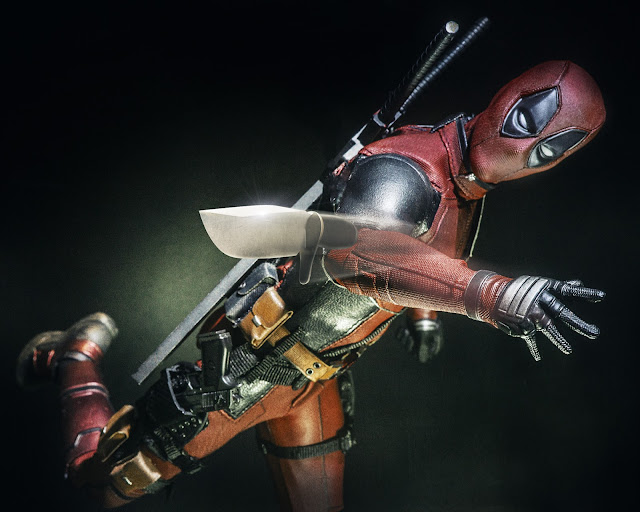 The idea of having Deadpool wearing some sort of underwear over his uniform also came to mind almost immediately.  It is awesome when ideas just spring to mind.  Takes a lot of the stress way.

So the question was, what underwear?  Since there is a large market of miniatures and doll clothes, I had assumed there would be pre-existing doll sized boxer shorts available.  So I Googled it....

Word of advice.  Don't Google that!  I got results, but I am still trying to drink the memory away of what came up.  I'm 44 years old and still not mature enough for what I saw.

So I took a picture of underwear, and used the Liquify tool to mold it to Deadpools ass.  I decided to make it pink, and add the Hello Kitty, cause humour. Also, it fits Deadpools style. 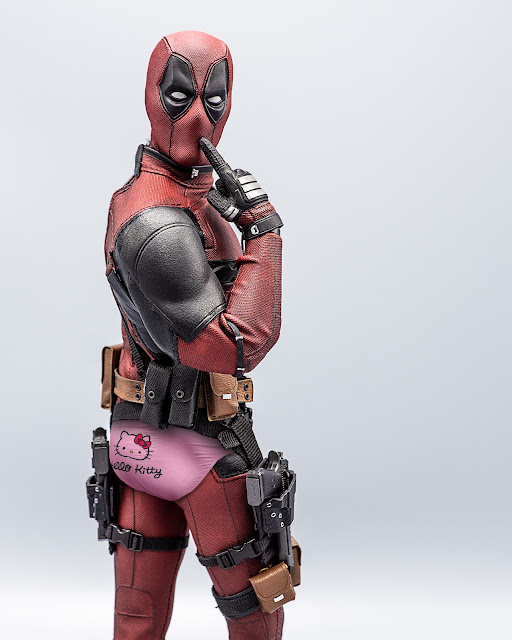 Also important in this shot is Deadpools pose. It really sells the surreal and ironic "I'm feeling cute" vibe I was going for with this shot.
Posted by Dave DeBaeremaeker at 8:44 PM

The underwear shot is funny and awesome, great work Dave!

This is also a very good post which I really enjoy reading. It is not everyday that I have the possibility to see something like this. Hot men

I think this is an informative post and it is very useful and knowledgeable. therefore, I would like to thank you for the efforts you have made in writing this article. Best Leggings

Nice to read your article! I am looking forward to sharing your adventures and experiences. 女装グッズ