As I posted on Facebook on New Years Eve:  I may have the worlds first Scattergories injury (tho others want to claim it as a hockey injury, but really its a much less unique accident while walking while staring at a cell phone injury). 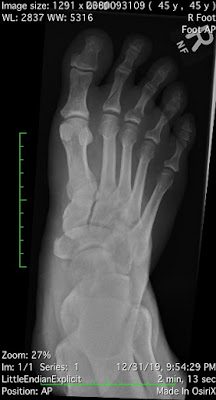 So at 7:30-8ish PM on New Years Eve I was lying down in the guest room of my in-laws house up in Ontario Canada.  I was relaxing and watching a recorded NHL game: Rangers vs my beloved Maple Leafs.  It was close to the end of the second period when my wife texted me from the first floor living room saying the rest of the family was about to start playing Scattergories (one of those word based party games).

Since I had a few minutes to go in the period I decided to watch the rest as I went down stairs.   I got to the 3rd last step when suddenly my feet kicked out from underneath me, my phone went flying, my butt went thumpy thumpy, and I slid down the rest of the stairs to the bottom step.  At which time I took stock of the situation. Most of me felt surprisngly fine, but my right foot hurt.  I slipped off my sock and saw that my middle toe was no longer facing the same direction as the rest of the toes.

To top it off sometime between my foot slipping and me arriving ungracefully at the bottom the Rangers scored on the Leafs.  Literal insult to injury.

So shortly after I got to my feet, my wife drove me to the emergency room of the local hospital.  X-rays confirmed that I indeed had two broken toes. (My first bone break ever - I am so proud) One had a simple crack, the other misshapen one was broken clean in half.  The doctor straightened the middle one, taped me up, and sent me on my way.  He did suggest that I go see an orthopedic surgeon to look at the middle toe. 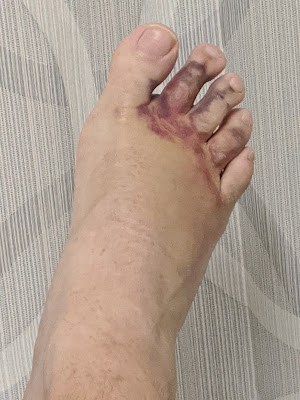 So we went back to my in-laws house.  The annoying thing was that the emergency room didn't have any orthopedic boots in stock, nor crutches (very small town), so I had to use my hiking boots as a supporting boot.  The next day was New Years Day so I couldn't buy a boot, but fortunately I was able to borrow crutches from my wife's cousin.   So armed with mobility we headed off to complete our plans for New Years Day, which was visiting a photographer friend who wanted to get some portraits of me for his series of beard portraits,

The next day, Thursday, we drive home the 12.5 hours back from Canada.  Once home I booked an appointment with an orthopedic surgeon for Monday, and ordered an orthopedic boot off Amazon.  I was soon back in a hobbling but mobile state for the weekend.

The emergency room gave me my x-rays on CD-ROM, so a family doctor friend offered to drop by the house on Friday to take a look at my x-rays for a second opinion.  Once I downloaded a viewer for the images I quickly realized that I actually had a third broken toe.  So the 2nd and 4th toe had cracks, and the third was a clean break. 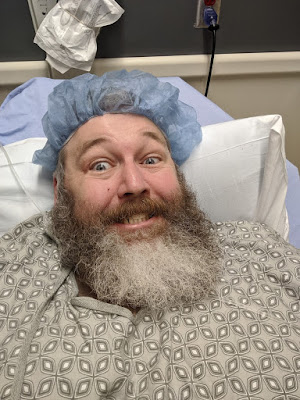 The orthopedic surgeon looked at my foot on Monday and his first comment was "Yep, you broke 4 toes."   Its a well documented myth that vaccines cause autism, but apparently every time I see a new doctor I break another toe!  After closer examination it was determined that the 4th "break" was likely an old injury, or an x-ray smudge.

Never been more relieved to only have 3 broken toes!

So surgery was booked for Wednesday (yesterday).

For surgery prep I was basically told to keep my foot elevated at all times, to reduce swelling.  This basically means I spent a couple days lying on the couch and lying in bed.  Before this I was able to go downstairs to my studio basement and get some creativity in.  Staying still has been a challenge.

So the surgery was pretty simple, and pretty unremarkable as things go. I left the house at 9:30, and returned at 2:30.  I was under general anesthetic for about an hour. 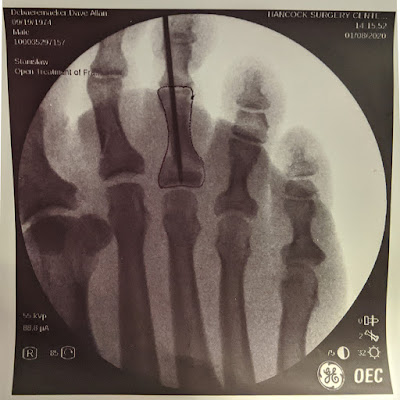 The surgery was to have a pin inserted into my middle toe to keep it stable to give the bone a change to heal cleanly.  However it also means I am basically not allowed to put any weight on my right foot,  and keep it elevated as much as humanly possible.

Annoyingly I am actually less mobile that I was before the surgery.  This is actually mentally very hard to deal with. Previously I could get into my studio and be creative, and do things.  Now I am stuck upstairs, and really limited to the bed or the couch.

I  described it to my wife as it feels like the exact opposite of depression.  When I was having depression episodes I had all the desire to go do things, my flesh was willing, but I couldn't get up the mental energy to actually get off the couch to go do it.

Now I want to go do things,  and I have all the mental energy and desire to go do them, but my flesh is keeping me on the couch.

The one benefit of having depression is that I am more aware of how things affect my mood, so I can deal with the mental stresses much better than I otherwise would have - yay for emotional intelligence!

So for now I am taking a couple days off work while I am on post-op pain meds.  Then I will be working from home for at least a week.  I have a follow up appointment next Wednesday to see how I am doing, and whether the doctor will allow me to go to work, or at least go downstairs to my studio.

Until then, its bed rest for me!

And thus ends the story of my 3 broken toes.

Posted by Dave DeBaeremaeker at 8:25 PM

At least I can 1 up on you. I have 2 pins and 2 screws in my ankle. you probably will get your pin out. Mine are still there and I can feel every weather change. They say when God gives you lemons, make lemonade...enjoy all the service you will be getting in the next little while. Hugs
Mom

Hope you are up and about soon. I have 14 more days till I get a new knee. Although some risk involved I'm still hobbling along enough to keep muscle tone...and rid myself of the boredom of sitting with my legs propped up all the time. Dealing with depression and PTSD I get that part well. The reason I learned to paint and draw in the recliner as well as other hobbies...keeping the brain occupied mostly keeps me out of trouble. Rest well and recover fast. Best to you and your family.

Nice to have confirmation that you never do things half way, pal! It'll be a slog to go through (12 weeks when I broke my wrist, one crushed bone, one with two pins) I'm sure you'll bounce right back as soon as you're able.
Sending many healing vibes through the interwebs. You can feel 'em, right?? ;-)