Winging It: The Adventures Of Indiana Frog: Rockin' the Temple Access Tunnel

I am in the process of winging the creation of a "round rock chasing Indy through the ancient temple access tunnel"diorama with which to make an image with my Kermit The Frog/Indiana Jones hybrid action figure.

I have no idea what I am doing, and no plan (just a finished shot in my head), but that hasn't been a problem in the past.

Last post I roughed in the tunnel with foam and sculptamold. It was starting to look good, if I do say so myself (and who else would be saying that on my blog?).  I started this build session by adding in a back wall. 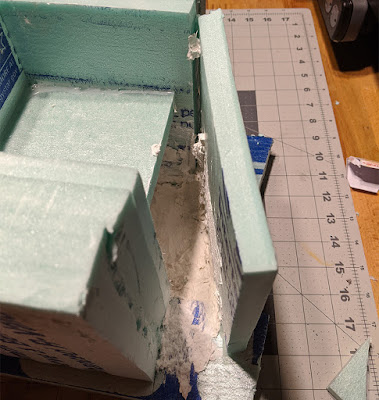 The wall is angled, to give the effect of the tunnel heading off to the right in the distance. I left it roofless to allow in light.  My example image shows there is a beam of light illuminating that back area, so I wanted to make that possible.  The effect works amazingly well.

During my off time from this build I had given some thought to the vegetation I will be adding near the end of this build.

It was going to be a problem.

I had originally skipped making a ceiling for the tunnel as the ceiling would not be in the final shot.  However I suddenly realized that I needed something to hang the roots and vines from (or invent magical roots and vines, but I am trying Hollywood magic here, not Hogwarts magic, so my confidence was low on the magic front - damn owl never delivered my letter!).  So I quickly added a couple angled bits of foam to act as a roof.

I then added a whole mess more sulptamold to fill in the walls, ceiling, floor, and other bits. 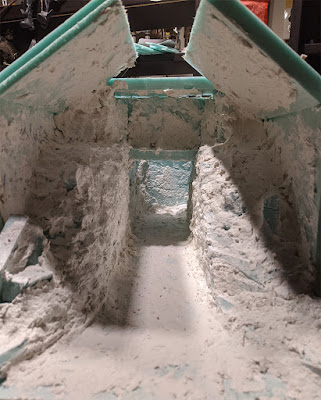 Once that was dry (turns out sculptamold dries in a half hour, unlike drywall putty, which would take days for this amount to dry), it was time to attempt a paint job.

I start as I normally do by adding a mix of Mod Podge and black paint. This is a mix I got from Black Magic Craft, and it both gives a nice black base coat, as well as a sealant for the foam, tying everything together, and making it a bit stiffer. Once mixed its basically paint with benefits, which I applied with a brush to everything. 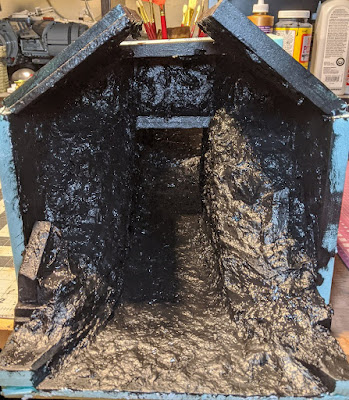 I then decided to add a base coat of burnt umber. There is a lot of dirt in the scene, and a nice dark brown would be a good start.  I used my air brush for this, since I got a bit annoyed with a bristle brush on the Mod Podge layer.

Once the brown layer was applied, I figured I'd add a dark grey to the places where rocks would be.  I also used an air brush for this.  However I basically ended up making everything grey. Oops.

I then added a couple layers of increasingly lighter grey.  I used a technique called dry brushing, which adds paint only to the raise areas.  This adds some texture to the piece and makes it more rock like. 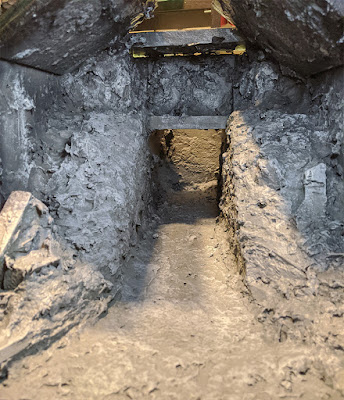 The photo doesn't really do it justice, but the rock actually looks pretty dang good, if I do say so myself (and who else... oh, wait, I already did this bit...sorry).

So the stone bits are sorted.  It is time to add some dirt.  I decided to skip the paint bits and just jump to adding actual dirt.   Coincidentally we are getting a bunch of landscaping work done in my back yard, and there is a massive pile of dirt just sitting there - and its mine! All mine! (well, once I pay the final bill it will be mine... but I'm good for it... cheque is in the mail. Trust me!). I grabbed some dirt, cackled maniacally to myself (as one does), and headed back to the craft table.

I then strategically added white glue to places where I wanted dirt to be added, then sprinkled on my new found dirt.   The result is this: 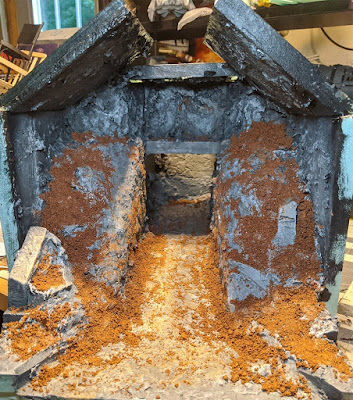 Again the photo doesn't do it justice, and it looks better in person, but not a great deal better.   I am not sure if I will need a different strategy or not.  However I need to let this glue dry, so I will decide what my next move is tomorrow.
Posted by Dave DeBaeremaeker at 7:21 PM