The latest round of the Photography Scavenger Hunt is just ending.  This round had a twist:  all images must be straight out of camera - in other words:  no photoshop!

I didn't want to compromise my style so I tried to go the opposite route and build all the stuff I'd normally composite in Photoshop in real life.

This is how I got the shot for "Coffee"

The concept was simply Death stirring a giant cauldron of coffee, ya know, as Death does.  I really have no idea where the idea came from - I just thought of it, and dang it, I am going with it.

I did a crappy job of capturing the behind-the-scenes shots, so you're going to have to use your imagination here, but I started with the cauldron.  Giant cauldrons at toy scale is the same as coffee mugs at human scale, so I started there. I wanted a metallic look tho, so paints would be required. I cut out a skull design from cardboard I got from a cereal box (Shreddies, if you must know), and glued it onto the mug. I then painted the whole thing with fleckstone paint (for texture) and a black primer (cause black).  I then drybrushed on some copper to get that old metallic feel.

Disaster almost struck tho.  I sprayed on a clear coat to protect my paint job when the mug slipped and fell onto the ground, breaking into 3 pieces.   It sucked.  It sucked a lot.  I may have cursed.  Heck, I know I cursed (Cursing is good for the soul when you've witnessed some of your best work shatter on the ground - try it! (the cursing part, not the best work shattering part)).  I decided to make the cracks part of the story, and glued it back together.  I then fixed the paint job and hoped for the best.

Death is stirring the coffee, so he needed a spoon.  I didn't have a giant Death sized spoon, so I carved one out of popsicle sticks.  I don't have a BTS of the spoon I used, but I have one of some oars I made for another shot (and never used), so you can use your imagination: 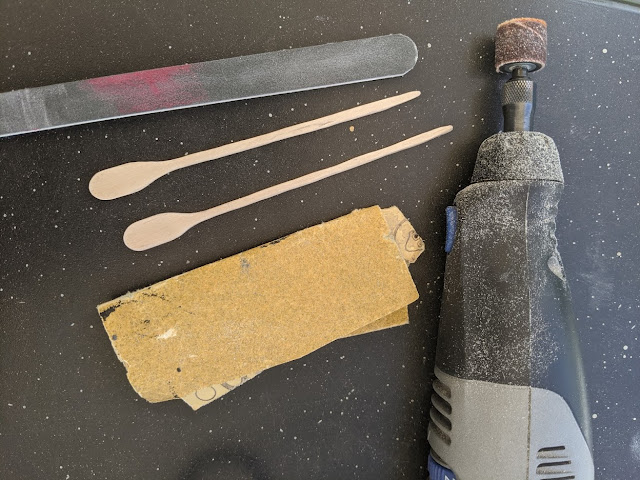 I made a pile of firewood out of sticks from the tree in my front yard.  The back wall is a simple paint job on foamcore, and the sign is a sign I made in Photoshop (yep, photoshop is allowed up until the final click of the shutter, from then on its no-touchy)

To get the shot I put a Lume Cube under the cauldron.  I also stuck a Lume Cube in the cup itself.  Then it was a simple matter of spraying in some smoke from my smoke machine, and shooting (and praying the smoke all looked good).

This is the shot I submitted to the hunt: 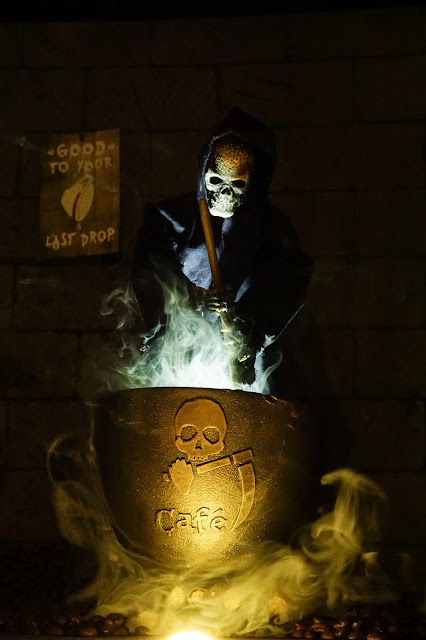 Once I had the shot submitted, I decided to process it anyway just to see the difference.  This is the Photoshop'd result: 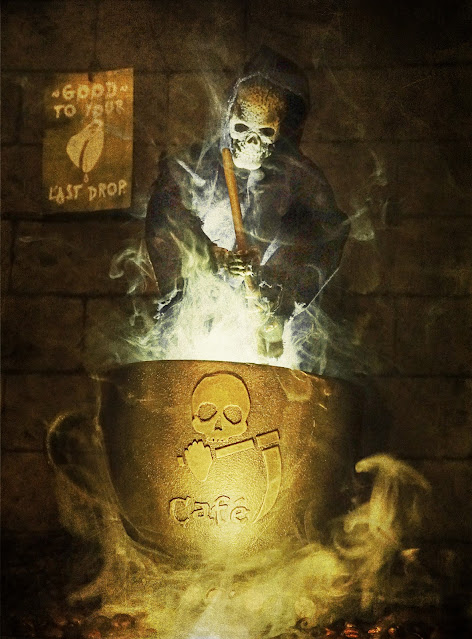 Posted by Dave DeBaeremaeker at 5:48 PM