This is how I built the world for the word "needle."
This was one of the last image I took for this round. I couldn't really come up with an idea.  Finally, after a bunch of brainstorming I came across the idea of the story of Gulliver's Travels, where he visits Lilliput, and is sewn to the ground by a bunch of small folk.

I have an 18" Deadpool, and LEGO minifigs, so I decided to set the scene using those characters.

The scene itself is pretty simple.  I made a beach scene large enough to contain Deadpool lying down: 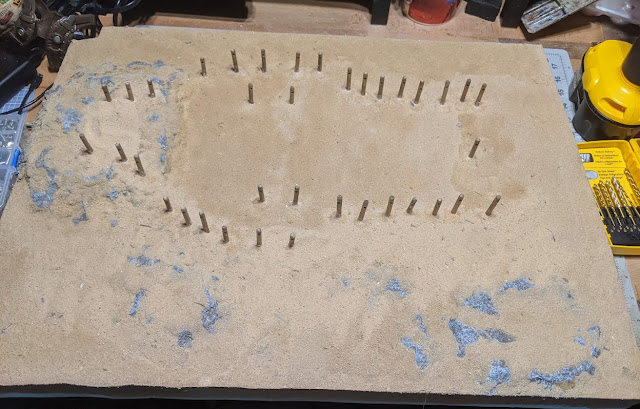 The sand is from the kids sandbox. The stakes are from BBQ skewers I cut down and aged with some craft paint.  Underneath I added some Sculptamold to make the land rougher, and to adjust the ground so that Deadpool looked like he was lying completely flat.  The figures neck didn't flex enough to tough the ground on a completely flat surface, so I build up that area to look like sand covered rocks.

I then sewed the figure in using some crafting string.

I carved the needle with a Dremel out of a 2/8" dowel, and painted it with metallic paint.

Once I had  Deadpool sorted I went through my LEGO minifig collection to pick out an appropriate figure.  I wanted an older (in historical terms) look for the Lilliputian, so I picked one that looked rennaissance-y.

I then put the whole scene in front of my TV screen and displayed a sky scene on the TV itself.

Then it was a matter of adding a couple lights to get the shadows to fall the way I wanted, and press the shutter.

The straight from camera version I submitted to the hunt looks like this: 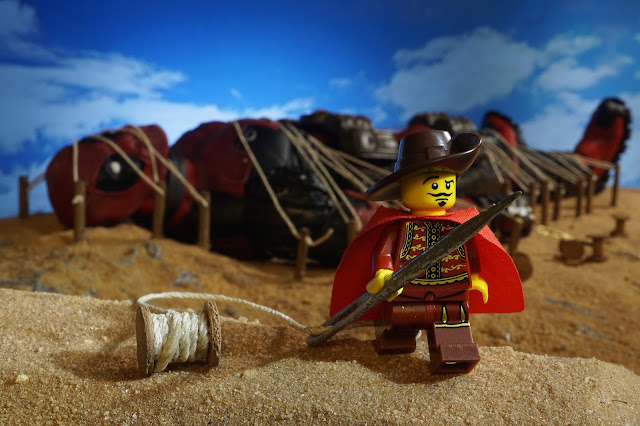 Afterwards I processed the image.  The main difference is I made the crop to be wider, then did some minor dust cleanup, and some brightness/contrast adjustments. 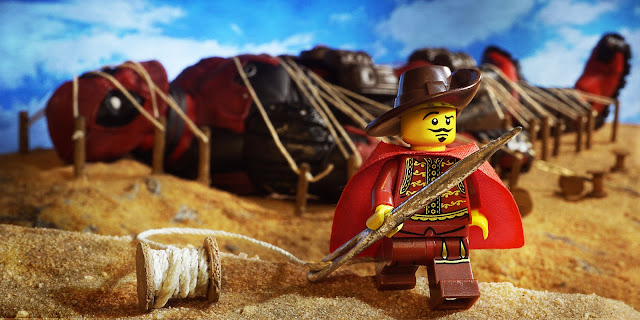 Posted by Dave DeBaeremaeker at 12:31 PM