The 3rd image in the Photoshop-free round 29 of the Photography Scavenger Hunt was for the phrase "in camera motion blur".

I had a bunch of ideas for this, all involving some sort of toy moving across the frame, and my capturing it with a slow shutter.  I eventually decided on a Teenage Mutant Ninja Turtle, Michelangelo to be specific (aka Mikey), skateboarding  down a sewer pipe.  Why?  Cause I had the figure, I had a skate board, and I already had a sewer diorama made for a shot I made last hunt.

It is a good thing I had that sewer made last time, cause I totally forgot to get a BTS shot this time, so I am going to toss in the one from the last round so you can get an idea of my shooting space: 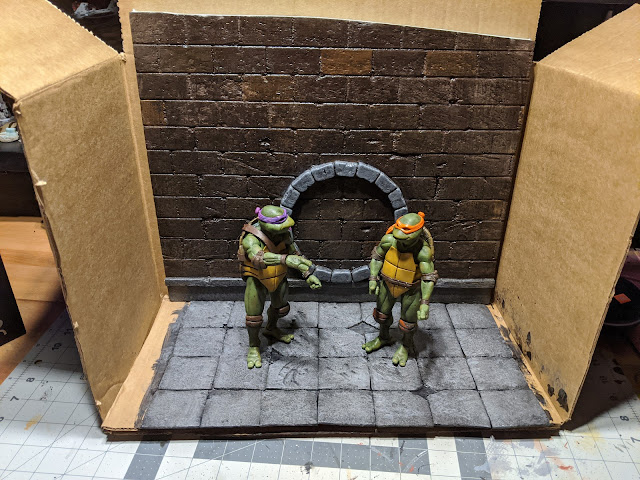 The only change I made was to cut down the cardboard sides, and paint what I couldn't cut away black, so it wouldn't show up in camera. Otherwise what I shot was this diorama-in-a-box.

The setup for getting the shot is pretty simple, but the actual taking the image is more complex.  It may be easier to understand if you see the final image first, so here it is! 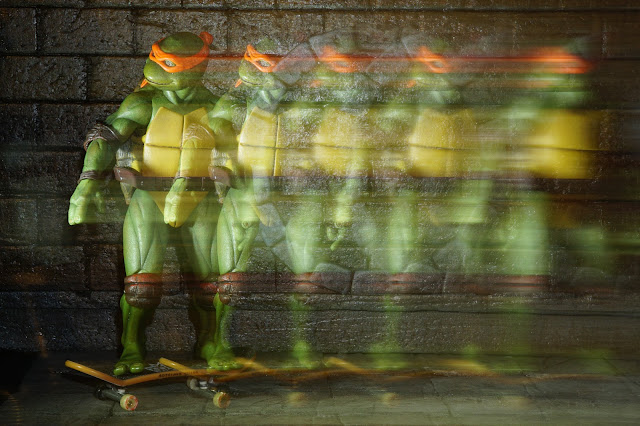 I set the camera up on a tripod in front of the scene so the camera was level with the bottom of the sewer, and so I could pan the camera and still have everything level.  Then I framed up Mikey so he was on the far right of the frame. I put the camera on a 4 second exposure.  When I clicked the shutter open, I held it still for ~1/2 a second, then panned the camera slightly, waited 1/2 second, then panned a bit more, and so on, until Mikey was on the far left side of the fame.  I timed it so the last position had about a full second of exposure so that instance of Mikey would be more solid in the frame (tho you can still see some brick work leaking through).

It took some practice but I eventually managed to get the timing just right to get the shot you see here.

As is my normal practice once I submitted my straight-out-of-camera shot to the Hunt, I processed the image further. I wasn't actually going to process this shot as it seemed pretty good as it was, but I did eventually clean up some dust spots, and lessen the brick pattern on the far left Mikey. 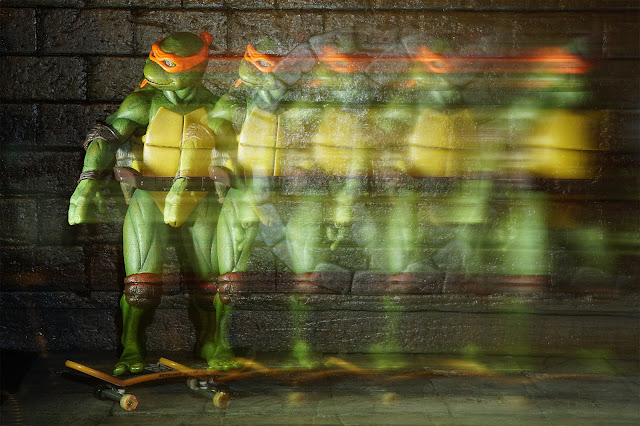