This is how I built the world for the word "boats."

The concept for this changed over the course of the hunt.  At first I wanted to do a boat being paddled by a skeleton, escaping a damaged pirate ship (ya know, as skeletons do).  But I realized the logistics of making that shot happen all in camera was way to much for what I was willing to do.

I even made a boat to use out of XPS foam:

I even carved paddles out of gigantic popsicle sticks: 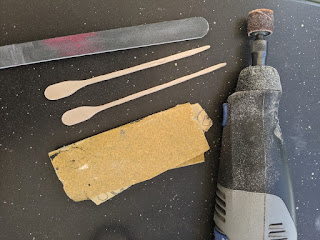 When it came time to shoot I realized I'd need a body of water, and I didn't really have a good one handy.  I do have a blow-up pool, but using that would put my camera at risk from water damage - plus by the time I got around to being ready for shooting the weather was getting colder, so being in a pool at night (my shot was a night shot) was not appealing.

I decided to scrap the concept completely and shift it to a shipwreck scene.  There are many real world examples of shipwrecks being entirely on land, so I didn't have to mess with real water.

I had already purchased a cheap pirate ship model for the original concept that I could reuse.  I just needed a scale beach for it to wreck on.  Enter XPS foam!

I started by making the base of the scene.  I wanted the ship to be washed into a sandy hill, so I built up some terrain with foam.  I imagined the ship wrecking as it went into an inlet, so I added some land on the far side.

For the water itself I needed an indentation in the foam. To get that I used a property of spray paint that is normally annoying with foam:  the propellant melts XPS foam.  This sucks if you accidentally melt your finished product, but it also can be used to make interesting patterns in the foam that is perfect for the bottom of a river.

I used clear coat to spray the foam in strategic locations to get an inlet type water structure going.

Then I grabbed some scraps to rough out some landscapes.  I wanted the ship to be washed against a pile  of sand.  I would use actual sand later, but I needed an underlying structure for that pile. Hence the square foam blocks. 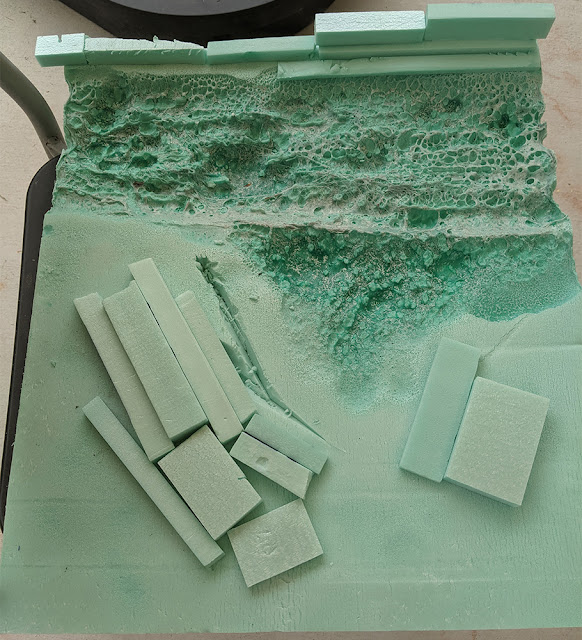 Then I covered everything in Sculptamold (paper based modeling putty, basically).  This allowed me to turn the rough square landscape into something more natural. I did leave a slit in the foam where the boat would rest, half-buried in sand over time. I then covered the beach in playbox sand I liberated from my kids sandbox. This is done by covering everything in white glue then sprinkling on the sand.  Once its dried I sprayed on a wash of (roughly) 1/5 glue/water, which sealed everything in place - the finished piece is actually rock hard once it all dries.

The water effect is simply 5 minute epoxy that had a couple drops of blue paint in it (you need a surprisingly small amount of paint for this - a few drops for 5oz of epoxy is more than enough). It took two batches,  total of 10oz of epoxy,  to cover everything.  This next shot is after the first batch: 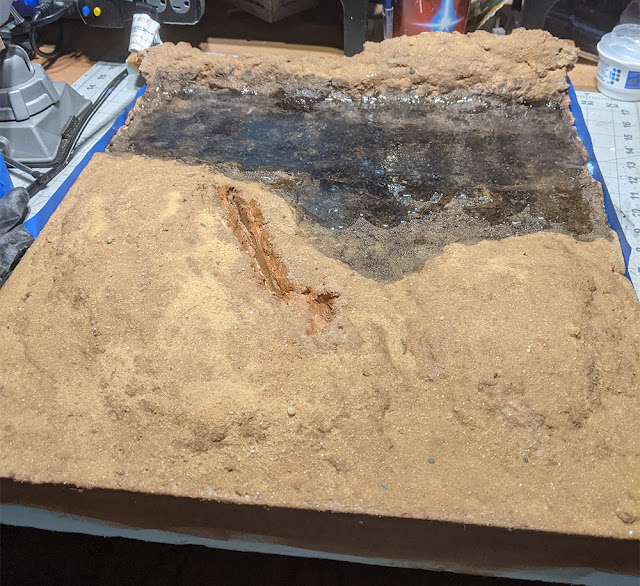 The next step was to make the pirate ship look old.  I started by breaking a couple of the mast bits that hold the sails.  Then I Dremel'd a hole in the bow of the ship.  Once the structure was wrecked, I spray painted the whole thing black. 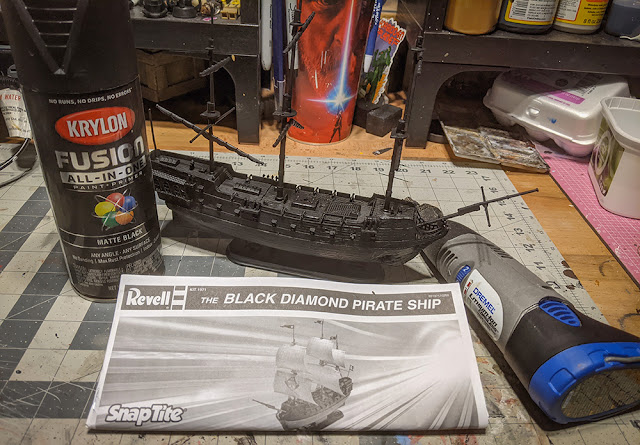 After that I painted up the ship using basic craft paints, first to look like it was new, then weathered it so it looked old, adding extra greens and browns to look like lichens and molds.
Once the ship was ready to go, I took the whole assembly and put it in front of my TV.  To add ambience I put an image of the Milky Way on the screen. 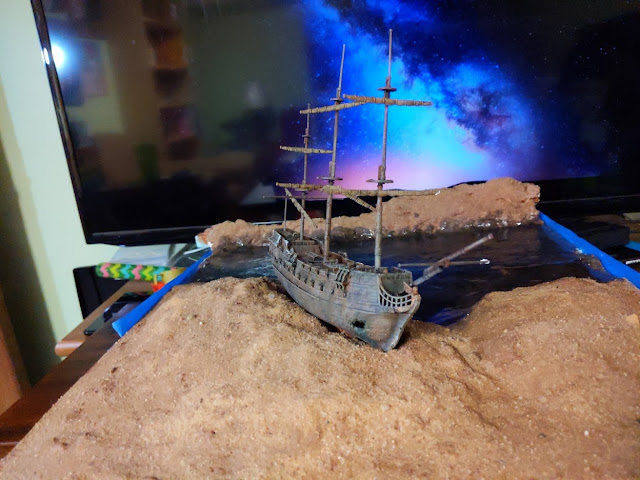 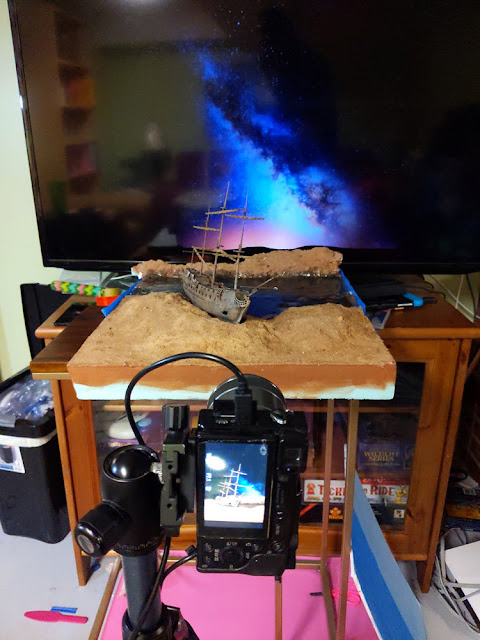 If you notice, the lights from the room reflect on the TV screen, and the camera picked those up really well.  So I had to turn those off and use Lume Cubes placed well off to the left side.  This gave me a very low light to work with, so I had to use long exposures to get the shot.

I found that the best look was from using my hand to mask out the sand from the lights for most of the shot, only letting it through for the last couple seconds of the exposure.  This made the ship brighter in frame and stand out more.  I also had to turn the brightness of the TV way down otherwise the background would wash out - not something most people normally have to deal with when shooting the Milky Way.

After a bunch of trial and error with timing, I finally got this shot with a 15 second exposure: 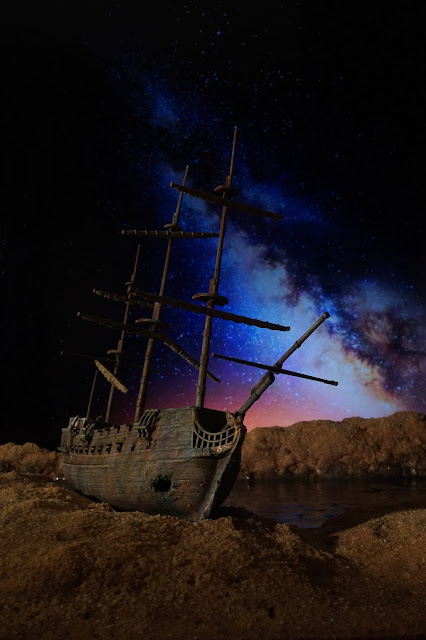 That is the shot I submitted to the hunt.  I was super pleased when I got this shot.  I tried to remove some of those small white reflections from the back of the boat, and along the far shoreline, but I couldn't figure that out, so I left it.

Now that the hunt requirements were done, I was free to process the image to my hearts content.  There is a lot of dodging and burning, some adjustments of light intensity in the stars, and cleaning up of some stray reflections from the TV monitor I didn't notice in the first image. 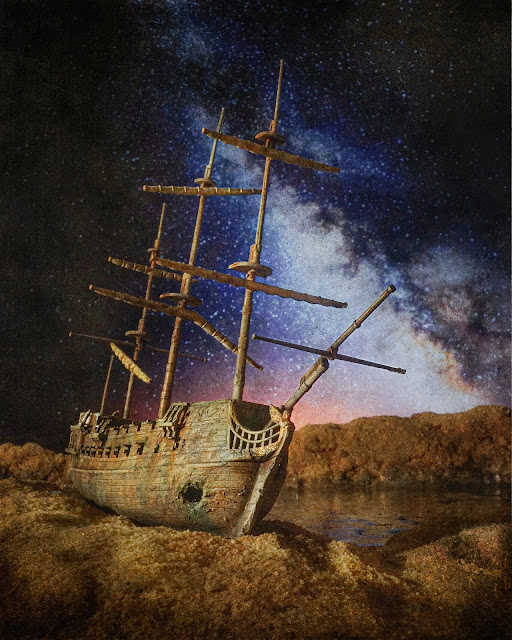 Posted by Dave DeBaeremaeker at 4:09 PM