This weekend we packed up the car and spent two whirlwind days in Nashville Tennessee.  I went to attend a Petra reunion concert, my wife went for the adventure.  Zeke went because he had no choice.  The dogs stayed home. The details of the concert are covered elsewhere.  This post is about the adventure.

We wanted to maximize our free time in Nashville so we woke up at 5am on Saturday morning, and was on the road 20 minutes later.  It is a 6 hour drive from my house to Nashville, so with a long breakfast stop to give Zeke time to stretch his little legs, we arrived at noon... er... 11?  It turns out Nashville is in the Central time zone, so when we arrived we discovered we had an extra hour to explore the city... which was awesome.

We started our Nashville experience by checking out Centennial Park.  The park contains the only full size replica of the greek Parthenon.  We spent a couple hours  exploring the rather huge structure, and the surrounding park.  Zeke loved playing in the leaves, and found the fountain to be a rather interesting spectacle. 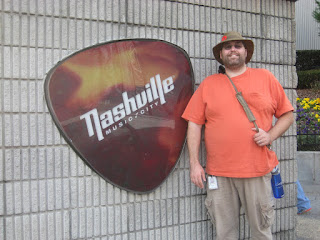 After the park we headed downtown to check out the Country Music Hall Of Fame. When we arrived I pulled out my GPS to mark my parking spot and it was then that I realized that I was practically standing on a geocache, so we took a few moments to grab it.

After that we took a stroll down Broadway St. to find another cache at a Baptist church.  Zeke came in handy here as I used him as a distraction to grab the cache without being seen.  Zeke has a million house hold uses. I highly recommend picking one up for yourself.

Broadway St. had a lot of bars and music themed stores, and is exactly what I expected to see when I think of Nashville and its rich musical heritage.  We walked around the area for a couple more hours until it was time to head 20 miles east of town to Hendersonville to check into our hotel.  It was there that I left my wife and kid in the hotel room to catch the concert (note: a good time to mention that my wife is completely and totally awesome for letting me go to the concert by myself) 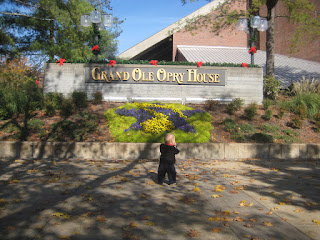 The next morning we headed out to do some more caching (I found 7 caches in total this trip), and we eventually made our way over to the Grand Ole Opry House.

We then stopped at a park to let Zeke get some more play time, and then we got in the car and headed back across the North Carolina line and arrived home just before 7pm on Sunday night.

Nashville is an interesting city.  I wish I could have spent some more time there and absorb some of the rich musical history and culture that the city seems to ooze from its core.   It is definitely a city I would be willing to visit again.

Before I finish this post and let you take a look at the rest of my Nashville photos, let me say that Zeke, being all of 13 months old, traveled amazingly well.  He spent most of the car ride sleeping or playing with his toys, and when we were walking around the city we barely heard from him.  He was an awesome travel companion.  Love that little guy I do.

OK enough gushing over the offspring.  As promised, the rest of the photos:


For another perspective on our trip (and much better photos) check out my wifes blog entry.
Posted by Dave DeBaeremaeker at 9:28 PM