Petra - The Rock Cries Out 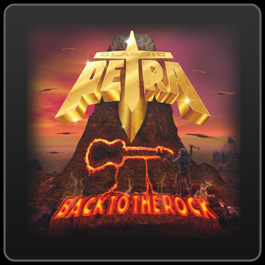 On Saturday I experienced one of my childhood dreams:  seeing Petra live.  It did not disappoint.

For anyone in my blog audience that is my age and grew up in a Christian home Petra needs no introduction.  For those of you who haven't, let me provide some background.

Petra is a Christian rock band that started in 1972, and played together for 33 years.  They were a ground breaking band, being one of the first true Christian rock bands. The have released 20 albums, won 7 Grammys and are the first Christian band to be inducted into the Hard Rock Cafe Hall Of Fame.  They have toured the globe, sold out arenas, and caused many a parent and pastor in the 70s and 80s grey hair as they tried to figure out if this rock music stuff had anything to do with Christianity (it does, thank you very much).

Petra was my favourite band while I was growing up, and I still listen to them frequently to this day.  I have dreamed of seeing them in concert ever since I knew rock concerts existed. The problem is that they retired before I got a chance to see them live, and I had come to terms that my collection of their songs (now on MP3) would be all I would get to experience of the band.  That all changed on Monday night when my wife informed me that Petra has regrouped, and is putting on a concert in Nashville on Saturday.  To put icing on the cake, the concert was free.  Despite being a 6 hour drive, and only 5 days away, I decided then and there that I was going to attend the concert. I couldn't let an opportunity like this pass me by.  It is too important.

You see, as a quasi "Preachers Kid", I was not allowed to listen to a lot of secular music when I was a kid.  Most of my parents music, and for that matter our church's worship style, bored me to tears (still does).   Don't get me wrong: my parents have a strong faith and they live it out daily, and I have nothing but respect for them - it is just that their preferred method of worship falls on the mind numbingly boring side of the scale.   When I was in grade 5 my parents started managing a Christian kids camp.  One of the counsellors left a Petra tape lying around the camp kitchen.  I popped it into my stereo and out came this awesome 80's style rock music.  Since it was Christian I was allowed to keep listening to it, and to my parents credit they bought me many Petra albums (as well as other Christian artists) as I grew up. 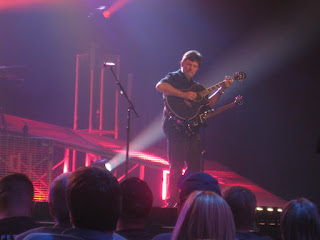 As I grew up and matured, and started to grow in my own faith, listening to Petra helped me realize that I could approach Christianity in my own way, and I didn't have to force myself into the boring mold that my parents modelled for me (again, nothing wrong with that mold, just didn't fit me that well).  I give Petra, in a large degree, credit for the strong faith I have now that fits me like a glove, doesn't compromise the Christian truth, and serves as a strong guidepost for my life.  So you can see how it would be important for me to go see these guys in person.

Really the only question was if my wife was going with me or not.  We didn't have a babysitter so she wasn't going to be able to see the concert, and she had a busy schedule on Saturday.  Luckily she was able to re-arrange her schedule so she was able to come with me, so at 5am on Saturday we loaded up the Zekester into the car and drove the 6 hours to Nashville Tennessee.  I'll blog about Nashville in a bit, and needless to say my wife is awesome for being willing to be left in a hotel near Nashville alone with a kid while I attended a rock concert (She's awesome!), but lets concentrate on the concert for now.

The concert was a taping of a live performance of their latest album.  The concert will be broadcast on TBN in 23 countries on New Years Day.  I had never been to a video recording session before, but it was pretty much as I expected.  Lots of cameras and cameramen,  some shuffling around of the crowd to ensure no empty seats in camera range, and then the band performed and everything was recorded.  There were some technical difficulties so they played the last 3 songs over again to ensure everything came off looking and sounding good.  From the perspective of a recording session it was an interesting experience.

The concert itself was fantastic.  The stage decorations was the exact same setup they used for their 1985 world tour.  The band sounded phenomenal - almost like the studio produced album does.  They definitely mugged for the camera at times, which is to be expected.  You could definitely tell that these guys knew what they were doing, believed in their ministry, and loved what they do.   It was an awesome performance, and everything I expected and dreamed of as a kid growing up. 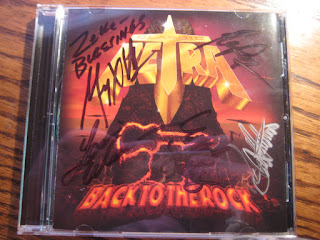 After the concert the members of Petra had an autograph session. I was able to shake the hands of every member of the band and thank them personally for their influence in my life.

During this session they showed some of the footage they just filmed, and I am definitely in some of the crowd shots. Just as the cheering after the final song started to die down, I looked over to find one of the crowd cameras pointing point blank at my face - it was on a boom, and no more than 12 inches from me, so maybe I'll be world famous soon :)

I also got them to dedicate a copy of their latest album to Zeke.  I will give it to him when he is older in hopes that it will show him that he can approach his faith in his own way, just like Petra helped show me, and secretly, that he will become a rocker like his dad.

Posted by Dave DeBaeremaeker at 10:24 PM