Bears Across America: Clinton With A Suess On Top 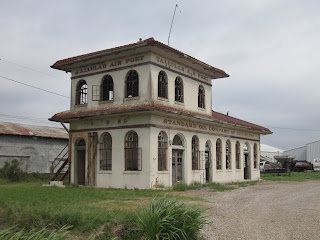 Monday, April 18th is the third day of our family road trip to the wild west of America.   So far we have driven through 6 states, and today we added two more to our list: Louisiana and Arkansas

After getting a hearty breakfast we left Vicksburg MS and headed across the Mississippi River to Delta Louisiana to do some driving and some caching.

One of the first geocaches we found was at a small airport in Delta that was the birthplace of a major airline... guess which one?   :) 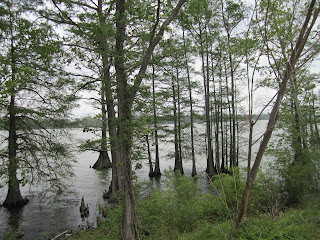 We didn't spend a lot of time in Louisiana, but our route took us along the Mississippi River for a couple hours of amazing scenery.

Once we crossed the Arkansas line we went immediately from river to farm land.  After a quick pull-off into the edge of a farmers field to make some lunch, we continued on our way to Little Rock Arkansas.  Our destination?  The Clinton Presidential Library.

I always thought a presidential library was more of an honorary type of thing.  One thing I was not aware of is that every document a presidency generates belongs to the citizens of the United States, and after a president leaves office all those documents are stored in the presidents library.  So this means the Clinton library contains a copy of every document he generated, all 80 million of them.

The library also contains a private residency on the top floor where President Clinton and his Secret Service entourage can stay whenever he is in town, which apparently is quite often.

The library also contains a lot of Clinton stuff:  presents he received, clothes he wore, the car he was driven in, and a replica of the Oval Office laid out exactly as he had it. 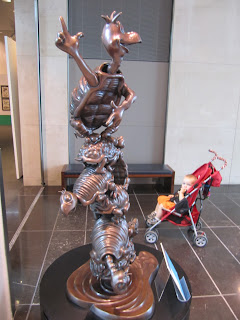 While we were there the library was hosting an exhibit of Dr. Suess artwork.  Suess is an amazing artist, and one of my favourite poets, so it was cool to be immersed in the crazy genius that is Dr. Suess.  When I inevitably go crazy (I'm saving up to become eccentric!) I want to slip into a Suess themed delusion - it will be a lot of fun.

After the library (and grabbing the cache in the gardens behind the library) we continued on and spent the night in Russellville AR.

Some of you may be wondering how Zeke is holding up after 3 days on the road.  He has been fantastic.  He tends to get a bit cranky at the end of the day, but who doesn't? :)

He loves watching the traffic and scenery go by the car window, and sings along with the radio (he's off key - gets that from daddy).  Last night he spent some time practicing for when it is his turn to drive: 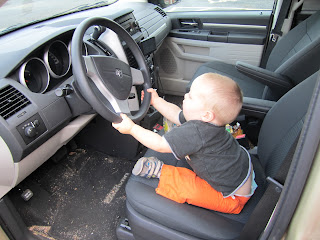 Wow, I thot the same thing about a Presidential library.

How are you liking the minivan compared to the PT? I actually kinda miss my minivan (my first car was an 1996 Ford Windstar).

I loved sitting up higher because you see more of what's going on around you in traffic. And sliding doors are awesome.

I only had the one sliding door. But I took out the bucket seat beside that door. That way I could sutff in the back and get in there & move stuff around without getting too wet even if it was raining.

Can't wait to read the rest of the posts.

Love the minivan for a trip like this. I think I prefer the PT for day to day stuff, as it is more car like and easier to maneuver and park. Its also cheaper on gas. It is a mild preference tho - I am not sorry I got the van, and I am confident it will serve me well in the future as it has on this trip.

The convenience of the extra cargo space in the van is a huge plus at times. I can get my bike in the back without having to fold down the middle seats (i.e. Zeke's seat), and going to Lowes for larger items is easier :)

The stow-and-go feature is the biggest win - all the things that normally go in the trunk: tool kit, jumper cables, emergency salt, blankets, emergency baby bag etc, all fit under the floor boards so I don't have a lot of things sliding around the back on a day-to-day basis.