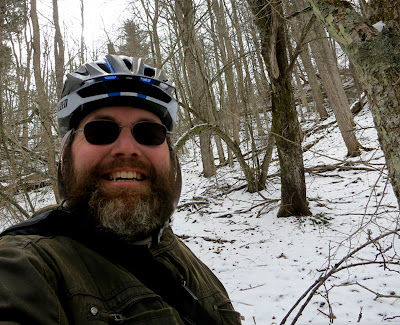 Let me start by saying that snow caching is some of the best caching going.

I wasn't expecting to get out caching much this weekend. On Friday I had a nasty cold that knocked me out for the day, and Saturday was full of Dr Seuss parades, and doing my income tax returns.

Today after church I was feeling better and starting to get the itch to explore.  I checked online for some new caches, and spotted some fresh ones up the mountain in a large park in Boone NC.  So I gulped down some lunch, tossed my mountain bike in the back of the Geo-van Of Destiny, and headed up the Appalachians.

I forgot the temperature difference between my house and the mountains.  It can be as much as 20f.  The temp at my house was 42f, which meant the temp in Boone was likely below freezing (25f to be precise). Indeed not only did the temperature drop fast as I drove higher into then mountains, but it began to snow.

Snow!  Now that is a good omen for an awesome day of caching if ever there was one.

Spoiler alert:  it was, indeed, awesome. 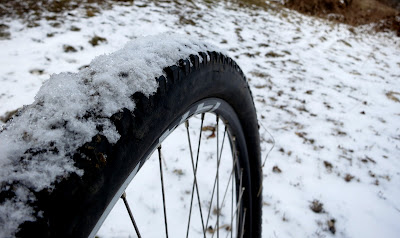 One of the new caches was a puzzle cache that required the finding of several of the other caches in the park to get puzzles to solve for bits of the coordinates to the final (get all that? If not, read it again).  Most of these caches are new, but one I had found before, which is a tad annoying, but since I had found it, it should be easy to find again, right?

Yeah, not so much.

So I biked along the snowy pathways, and soon arrived at ground zero for the previously found cache, which was under a foot bridge, to find that, yep, its gone.  Not a trace to be found.  Not even a hint that a trace would even be expected.  Completely missing it was.

No biggie - I'll just look it up on ye olde smart phone to see if it was moved, or is marked as missing. 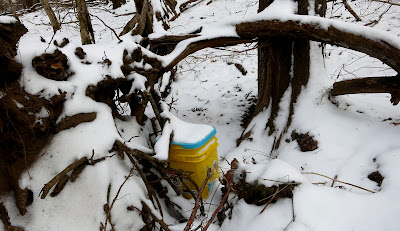 This would be a good time to mention that Geocaching apps are really, really good about not showing caches you had previously found, so despite having a good signal, it took a good 10 minutes to bring up the cache details.

Sure enough, the cache was moved 200ft west to higher ground. A quick trudge through the snow (yay!) and I had re-found the cache, and gained the information I needed to solve the puzzle.

I then moved on to find one of the new caches, which was down the trail a half mile or so, but elevation wise it was up a hundred feet or so, so up I trudge on a slow climb (I refer you to my status as a lazy fat man, and point out hills are evil, especially ones soggy with precipitation and getting crunchy in the cold).

One of the best things about geocaching is discovering things you'd never discover without it.  I have mentioned this many times in the past, but I repeat it now as a segway to the fact that it was at this point that I discovered something truly spectacular. 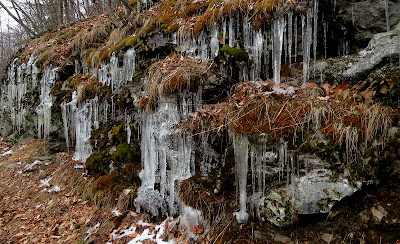 A wall of icicles.

If you live in more northern climates you may be thinking "meh, ice sucks", but keep in mind that I haven't seen enough winter weather to create an icicle around my area in years.

For a Canadian expat this sight really warmed the heart and brings one back to the winters of ones youth. Plus icicles are awesome.  A wall of them are truly one of the cooler (pun intended) and beautiful wonders of nature. 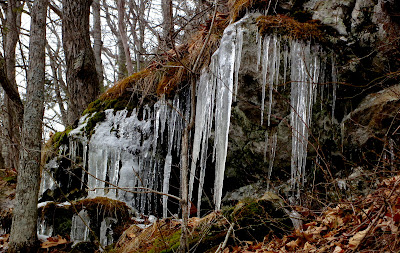 The wall of ice was very close to ground zero for the next cache.  This presented a bit of a problem as the side of the hill  I needed to climb (really it was a short cliff) was a combination of ice and very slick mud.  The bits that were not slippery were full of thorns.

I had to go down the trail a hundred feet or so to find a spot that gave me a combination of enough traction and trees to hold on to for leverage so I could make it to the top of the cliff.   Once on top I quickly found the cache, then played "dirty slip'n'slide" back down to the trail. 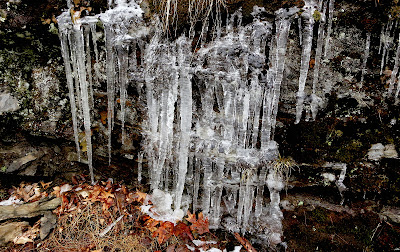 I then moved on down the trail to the next cache.  To avoid suspense let me say that I didn't end up finding the puzzle cache - partly due to a bug in one of the puzzles (confirmed by the CO), and partly because I can't read cache descriptions properly (also confirmed by the CO).  I did have a good time finding all the caches required to solve the puzzle, and a few more (including an opencaching.us cache).

Time was running short, so I headed back down the mountain where, annoyingly, there was no traces of snow... sigh.

I can, however, console myself with the fact that for one afternoon, high up in the Appalachian mountains, this Canadian boy with a sense of adventure, finally got his boots into some fresh, deep snow - and that is, as you can clearly read, good for the soul. 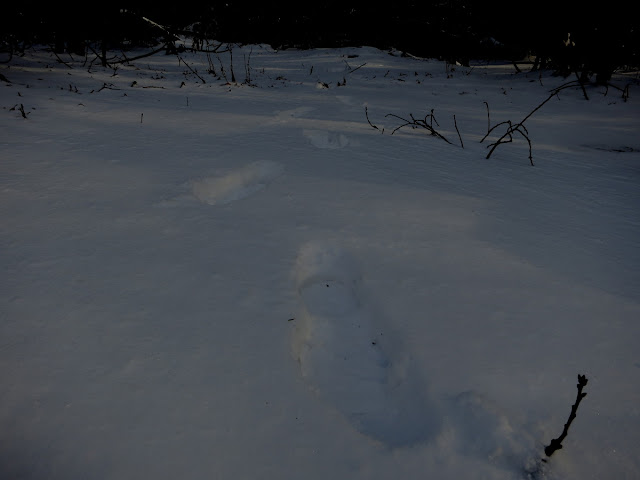 Posted by Dave DeBaeremaeker at 10:02 PM

I would like to remind people that if you click on the photos you can see them larger.

Sweet! Caching in the snow is fun and adds a little more difficulty to the search. Some say it's too cold but I like it! Nice post!

I've only found one cache in the snow. Ever! Plus its is summer here, so ODF to think it can be this cold anywhere.

Brrrr! you are dedicated!!

Anything in the snow is fun!