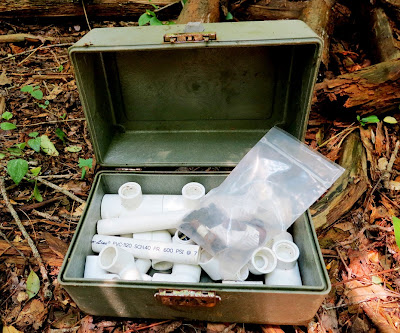 A gadget cache is a geocache where one has to solve a physical puzzle of some sort to open the container, or get the next waypoint coordinates.

They are also, in my opinion (but then, who else's opinion would it be?), some of the most fun one can have while geocaching.

Case in point: I was out and about geocaching one day in the recent past when I came across a multi-cache.

At the first waypoint I found a nondescript box that contained the following bits and bobs:

- a bunch of PVC pieces,
- 3 large metal bolts of various sizes, each marked with a letter
- a bag of 10 or so small black bolts.
- an instruction booklet

By following the instructions in the booklet (in multiple languages no less), you end up constructing a set of scales, like so: 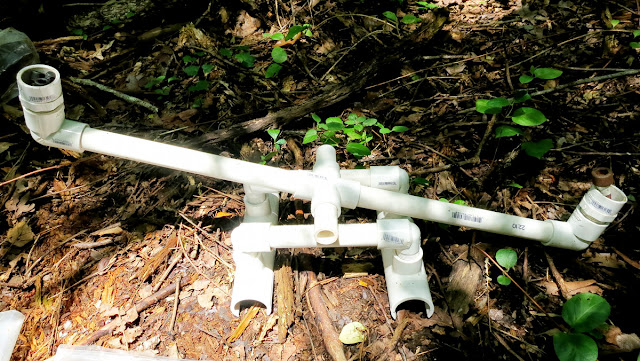 To get the coordinates for the next waypoint you need to weigh each large bolt to see how many smaller bolts it takes to balance the scales.  Then you plug in those numbers into a formula, the answer of which is the next coordinates.

Following the coordinates takes you to a nice ammo can.

I love these types of caches, and I really hope I get to do more of them in the future.  Definitely a lot better than any LPC or guard rail cache.  It just goes to show that a little creativity when creating your geocache hides can turn a typical hide into something really worth writing home about.
Posted by Dave DeBaeremaeker at 10:30 PM

Any chance I could get instructions for how to replicate this for a lesson for science students? I promise not to place it and copy you!