A Day In The Life: Why I Am A Geocacher 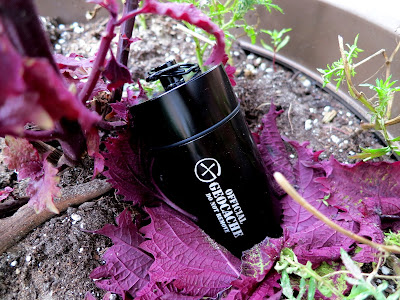 When talking to non-geocachers my hobby of choice sometimes seems weird and strange (and really, who can argue that it isn't just a little on the super geeky side of life?).

If you ever wondered what the big deal about geocaching is, wonder no longer.

Today was the perfect day to outline exactly why I like to geocache.  The following occurred within an 8 hour period, while exploring the countryside along the Kentucky/West Virginia state line with my wife and kids.

These are the events as they happened...

First I was attacked by a praying mantis outside of a shopping mall... specifically, this mantis: 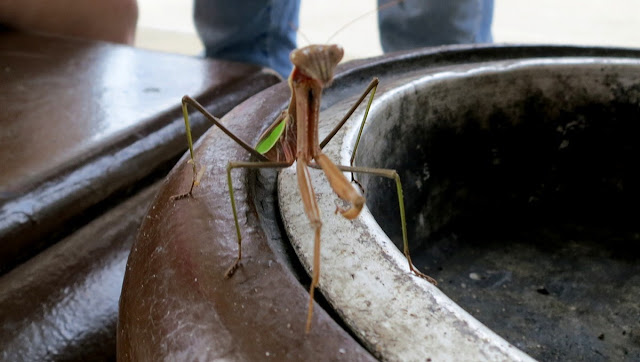 Don't worry, the mantis and I soon came to terms with each other.  Then I took the family inside the mall and had cupcakes with 50 or so other geocachers (it was an event).  Zeke liked the ones shaped like Cookie Monster (and really, who could blame him?) 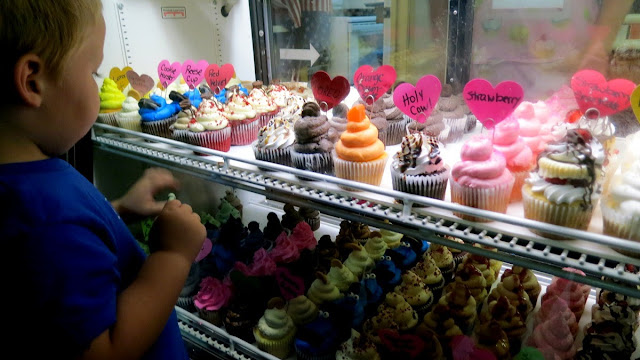 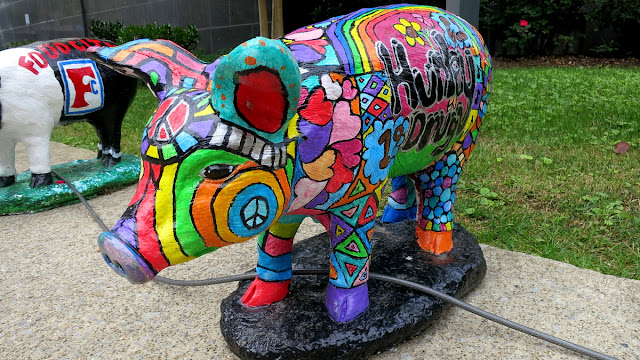 We then checked out a psychedelic pig...


... and a building made entirely out of coal.  Seriously, coal! (whoda thunk?) 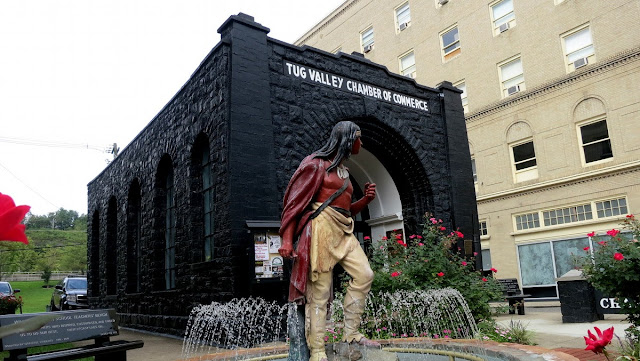 We then drove along side the Tug river, and came across an amazingly large number of coal train cars.  There were 7-8 rows of train cars (mostly coal, some tankers) that were packed together as close as train cars get, that went on for several miles.  You don't really get an appreciation for how much coal gets used in North America until you see a sight like this.

We ended up in historic Matewan WV, deep in the heart of Hatfield/McCoy country.  There are 5 new Geocaching Lab caches, and I was on the hunt to find them all.  Following the waypoints for the lab caches, I was taken on an historic tour of the small town. Since these are a new, experimental, type of cache, they were not perfect (coord issues and whatnot).  There were many cachers working on the same caches, so we teamed up, even tho we were all strangers to each other,  to help each other through the various issues.  I found all 5, as did many others.  At times there were 8-10 of us cachers trying to locate a lab cache, or one of the regular caches hidden in town. 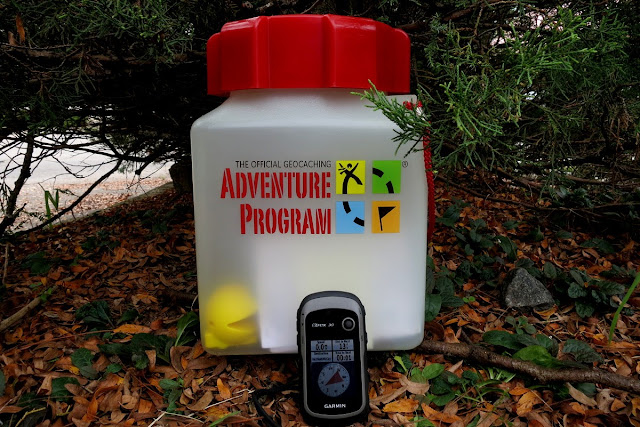 Along the way I had sights like this one:  These are bullets from the 1920 union uprising that happened here.  Actual embedded shells. You can't get much closer to history than this. 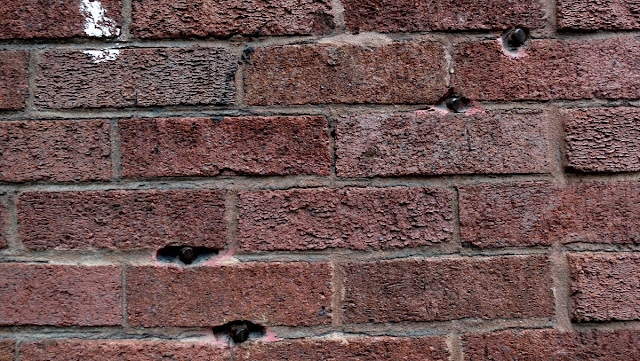 While I was talking to one of the geocachers in Matewan, I found out that she was a descendant of the Hatfields. Another brush with history (she swears there are no hard feelings for the McCoys, by the way).  Her great grandfather was the brother of the head of the Hatfield family during the feud.

Just as we leaving town we pulled over at a random park so our son could de-water.  I led him to the bushes and as he was doing his thing I looked over and spotted something that looks suspiciously like a geocaching container.  A quick check later and, sure enough, it was.  An unexpected find (and no, my son didn't get the cache wet).

We then moved on and drove towards Pikeville KY.  Along the way we drove by Canada.  Frequent readers of my blog will understand why this gave us all a thrill.  In this case Canada is simply a small settlement in the hills of south eastern Kentucky.  It still counts tho, eh? 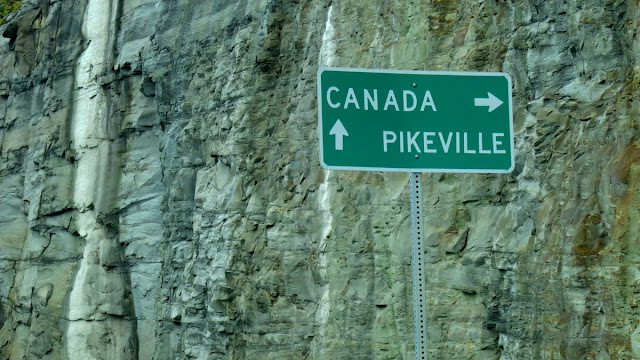 We then explored the Pikeville Cut-Through, which is an amazing earth works project that, essentially, transformed the landscape of Pikeville by carving back the hills, improving the watersheds, and making room for buildings and roads.  More than 20 million tons of rock, and 30 million tons of earth were moved to create more useable land, transforming Pikeville into a pretty awesome little town.

It is also very pretty.  This is, according to the information signs, one of the largest engineering projects in North America.

After this we headed to downtown Pikeville to check out the Hatfield/McCoy Heritage Festival (did I mention it was Hatfield/McCoy country?)  It is your typical street festival with  music, food, carnies, games and fun.  We would not have been to this festival had geocaching not brought us to the area.

We spent a fair amount of time soaking up the scenery, and listening to some live music: 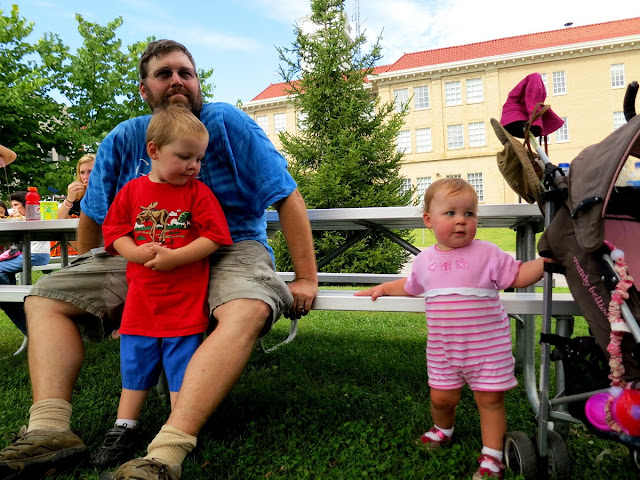 Then we returned to the hotel for a pre-supper swim.

Once the kids were put to bed I went for a walk to grab a few more caches in the parking lot, and got stuck in a drive-thru.  I found a cache on a guardrail behind a Dairy Queen, just off the driveway for the drive-thru line-up. When I made the grab the lot was empty.  I stepped away to sign the log, and when I returned there were 10 cars in the drive-thru line.  Gah! Took me 20 minutes to catch a break in the traffic so I could return the container.

So that was a single day of a (mostly) unplanned day of exploring.  I have had many, many days like this since I started geocaching, and almost none before that. It certainly beats the pants off of staying at home on a weekend and watching TV, and maybe mowing the lawn.
So if you are not a cacher and wonder why I do what I do, perhaps this will answer some of your questions.

Adventure is its own reward.
Posted by Dave DeBaeremaeker at 11:01 PM