A Trip Around The Bay 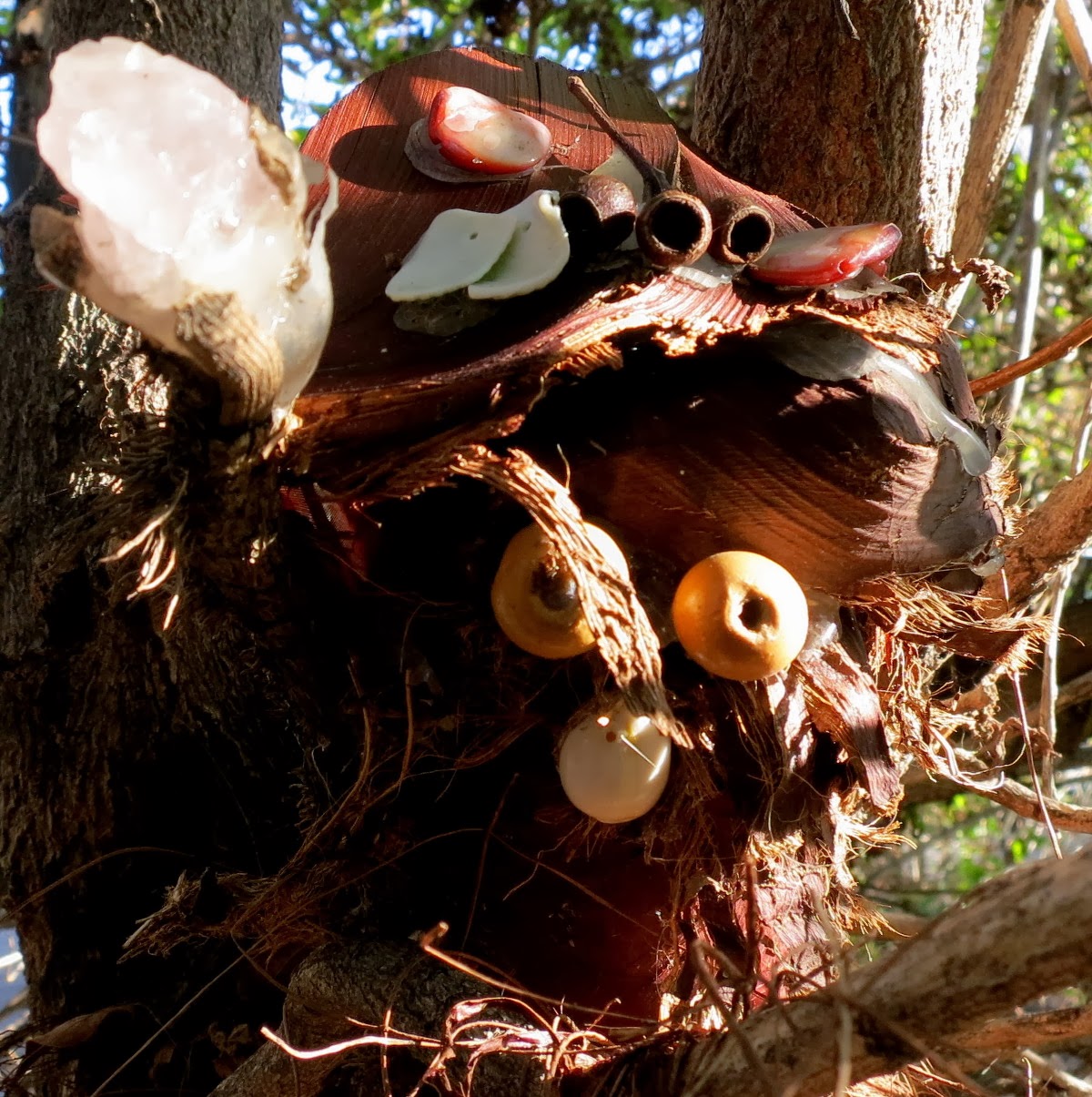 One of the most striking geological features of Silicon Valley in California is San Francisco Bay.  I have been to silicon valley many times, but I have never driven around the bay.  On Saturday I changed that.

It is December, so the days are short.  To maximize my daylight I left at 7AM, when the sun first peaked above the horizon.  I started in Mountain View, and started heading south and then circled east.

The first two caches were right by the hotel, and were puzzle caches.  This was part of an attempt to grab a challenge cache of finding 3 puzzles in a day, one of which being 25 miles from the others.

I then drove to the south east corner of the bay in a town called Fremont.  There I did 9 caches by a caching team called Tattletales. All 9 of these caches ranked among the most creative caches I have ever done, and if you ever get a chance to do a Tattletales cache run, don't walk, to GZ. You will not regret it. I won't leave spoilers for the caches, but I will say that on top of great containers and interesting field puzzles, you get led to fantastic locations like this: 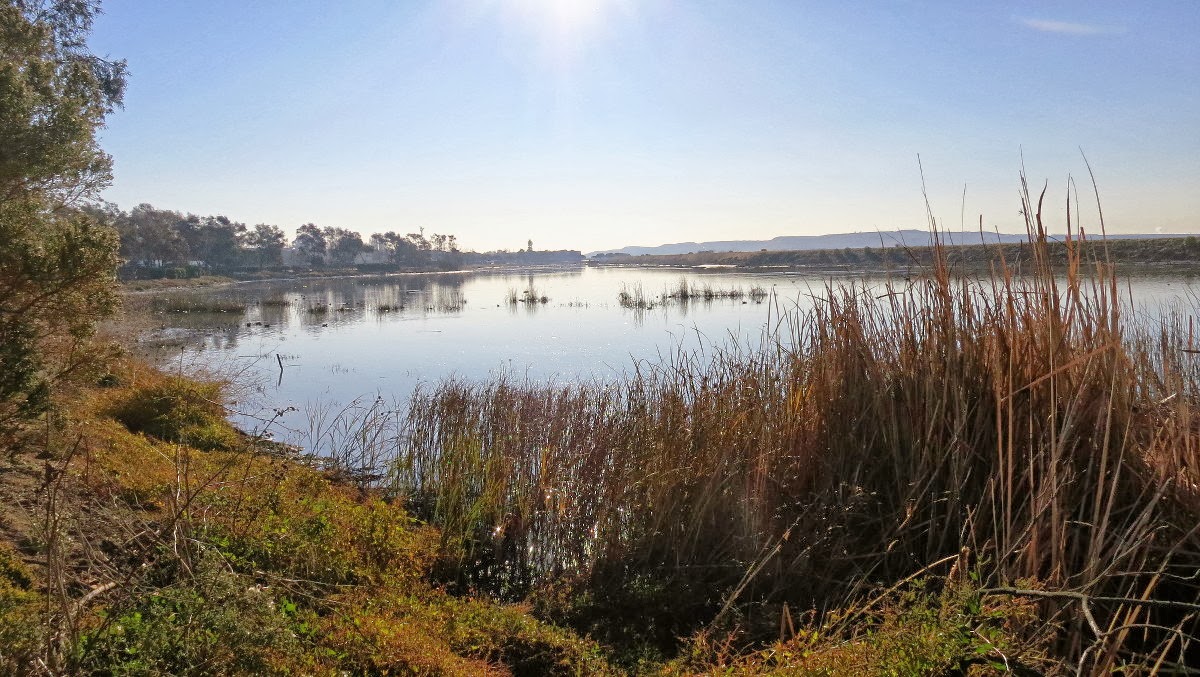 I then worked my way south to Suisan Bay, where there exists a ship boneyard.  That is a place where they store old ships that they may want to reuse some day.  Visiting this place has been on my bucket list for a while, so it was nice to grab a cache nearby to mark the occasion. It is always satisfying to cross off a bucket list entry. 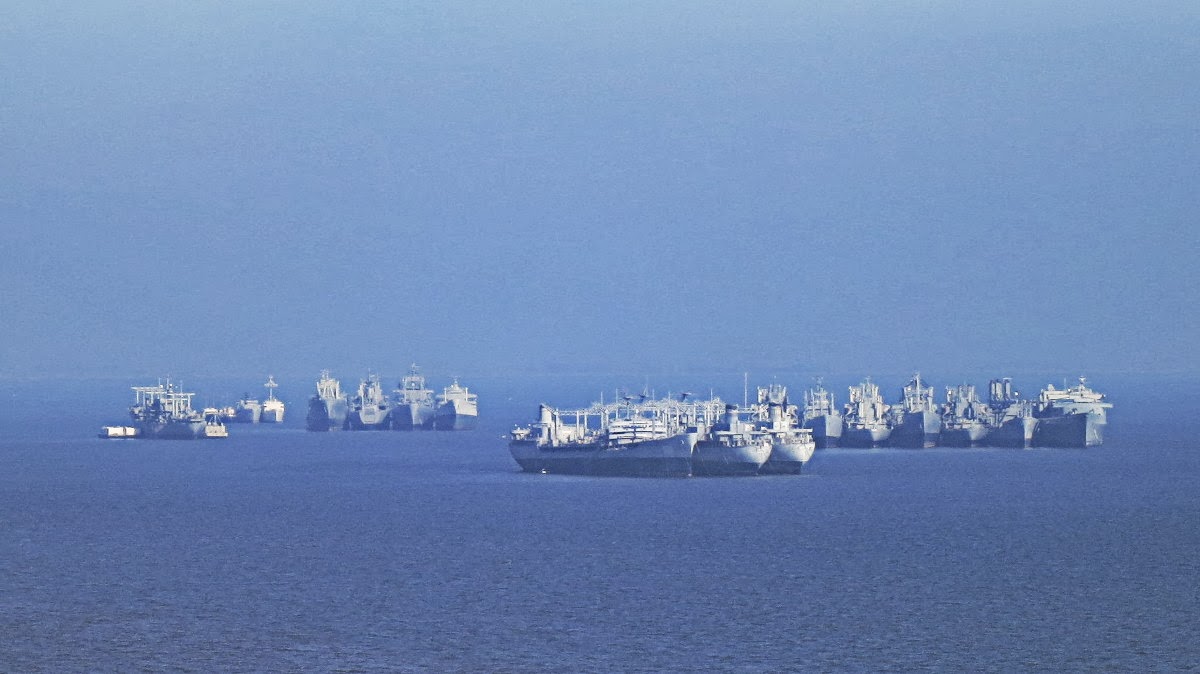 I was on a role.  At this stage it was right around lunch time, and I had found 20 or so caches (my record for a day of non-power-trail caching is 27), so I was doing well.  Unfortunately I ran into a big o'rolling roadblock, namely this: 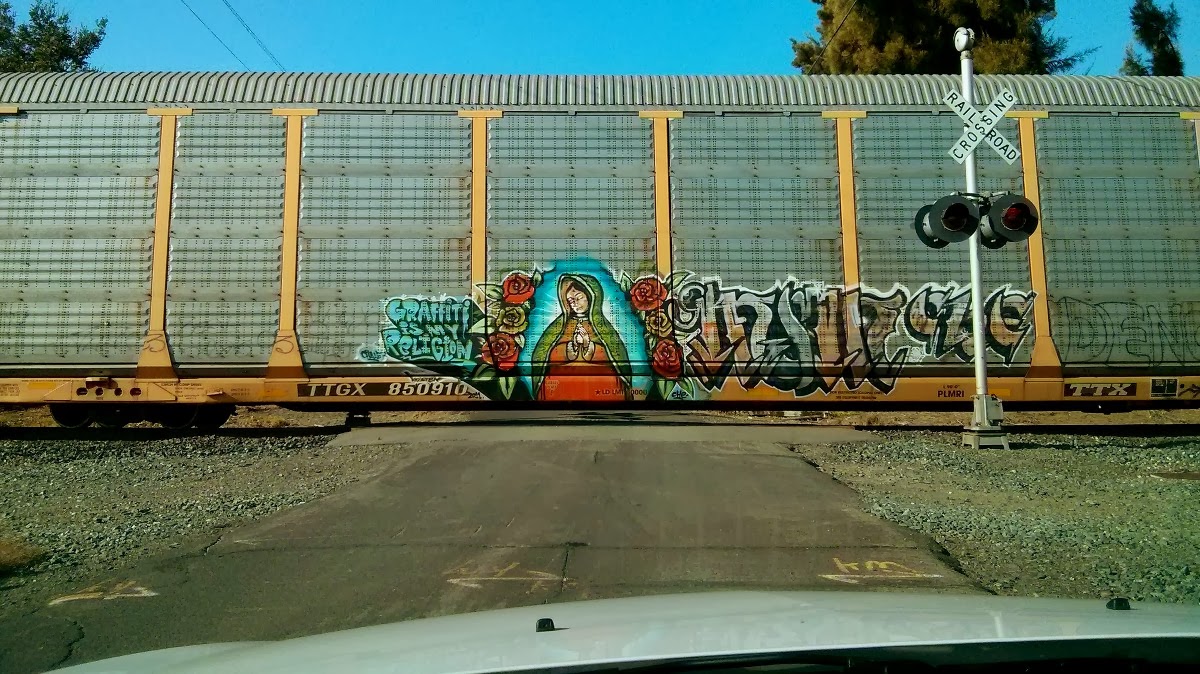 This train crossed my path - the only road out of the parking lot I was in - and stopped.  I waited 30 minutes before it moved forward a few cars.  Then stopped again.  A few minutes later it moved.... backwards (queue Charlie Brown: aaaaarrrrrrgh!). 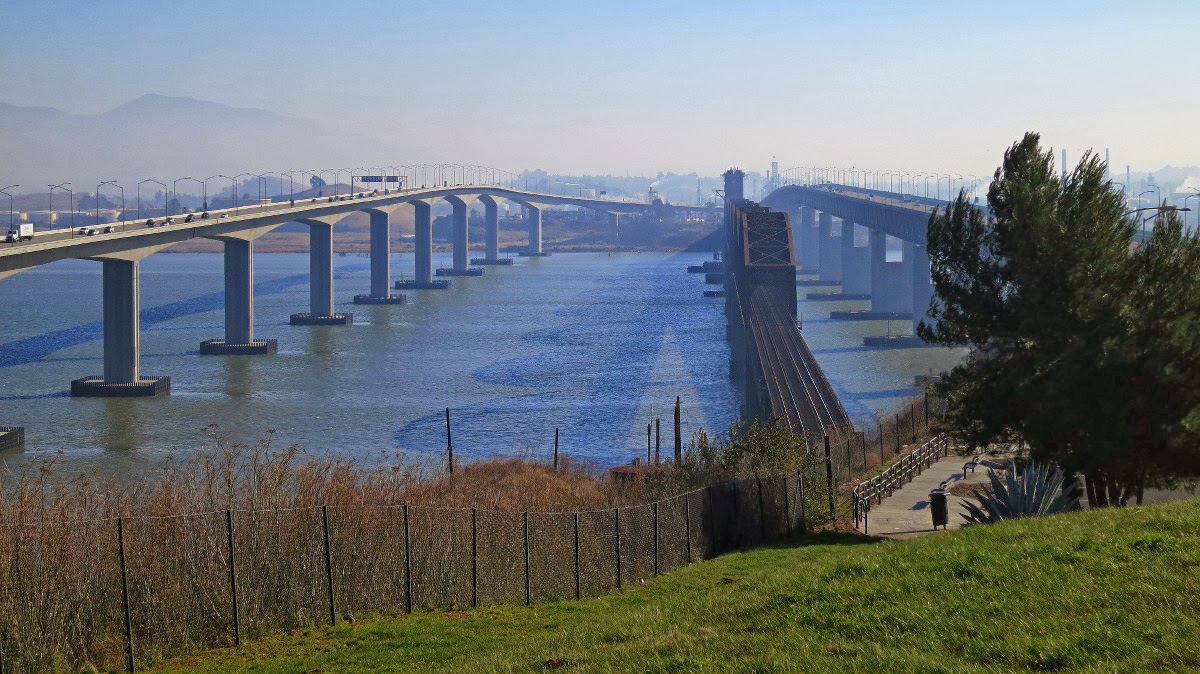 (It wasn't a total loss since I used part of that time to find a cache, and part of the time to organize tomorrows grand adventure (stay tuned!)). Eventually it moved on, and I continued on only slightly demoralized.

My next major stop was Benicia State Park, where I found my third puzzle of the day, making it a two-log cache (one for the puzzle, one for the challenge).  As a bonus I got to go on a 3 mile hike in the park in grasslands like this: 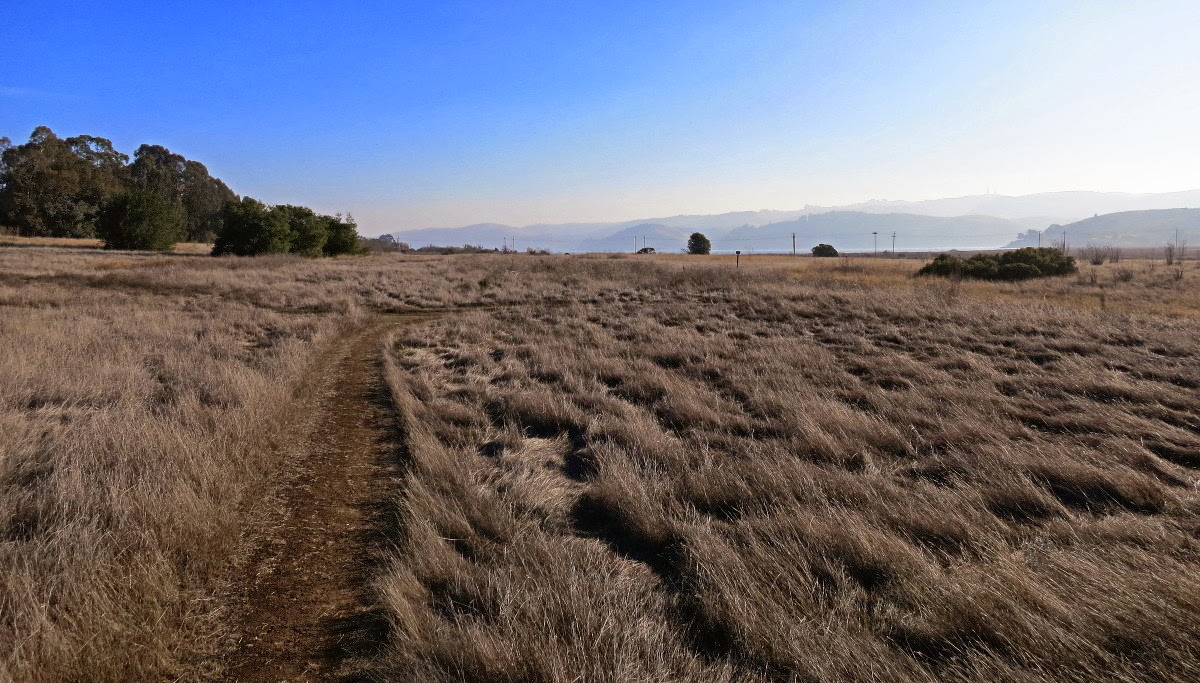 Oh, and the puzzle cache was my 28th cache for the day - so new record. Spiffy!

I was behind schedule, so I decided to skip some planned caches and simply drive around the northern end of the bay.

I crossed over the Golden Gate Bridge  and headed into San Francisco to check out the local scenery there.

My goal was a cache near an oceanic musical instrument.  It is a wave organ, which is a series of pipes that capture the sound of the sea and pipe them up, well, pipes, so one can listen to em whilst on dry land.  Kinda cool.

The wave organ is located on a fairly long jetty, that also features a lighthouse type device: 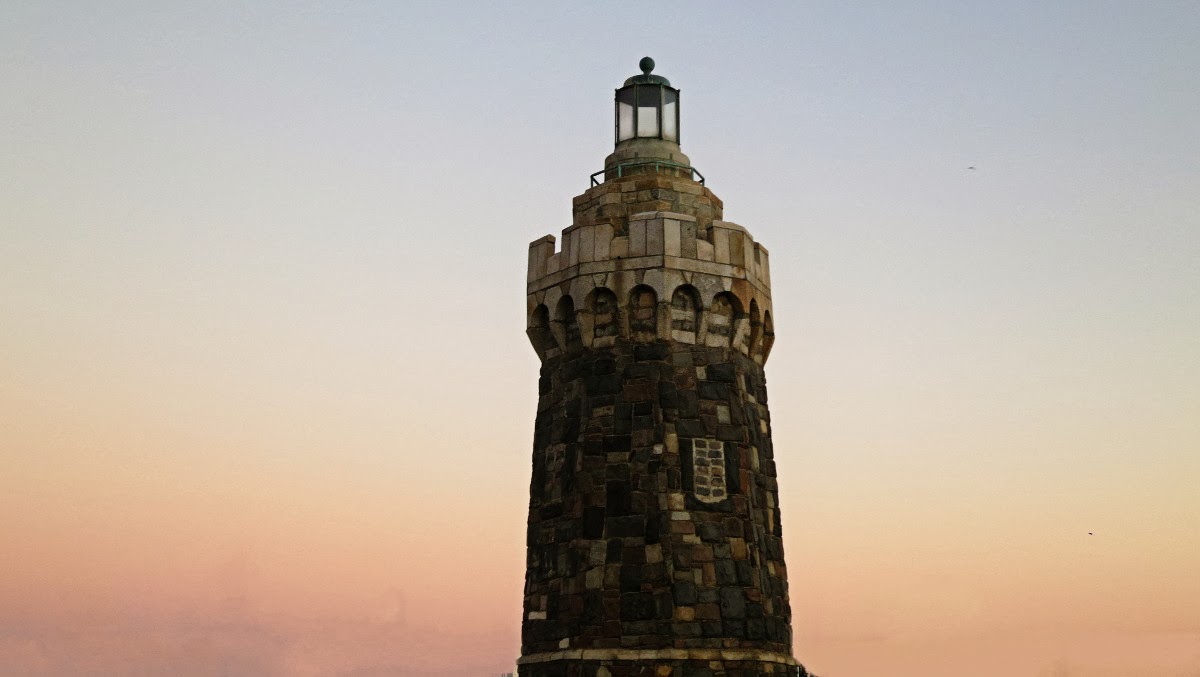 Since I was close to sundown I decided to hang out on the jetty and watch the sun go down over the Golden Gate Bridge.  I sacrificed a few possible finds, but with a view like this (not pictured, sounds of the waves crashing upon the shore, dogs running around, and hipsters hipstering), who really cares :)  Caching is about destinations, and this my friends is one heck of a destination. 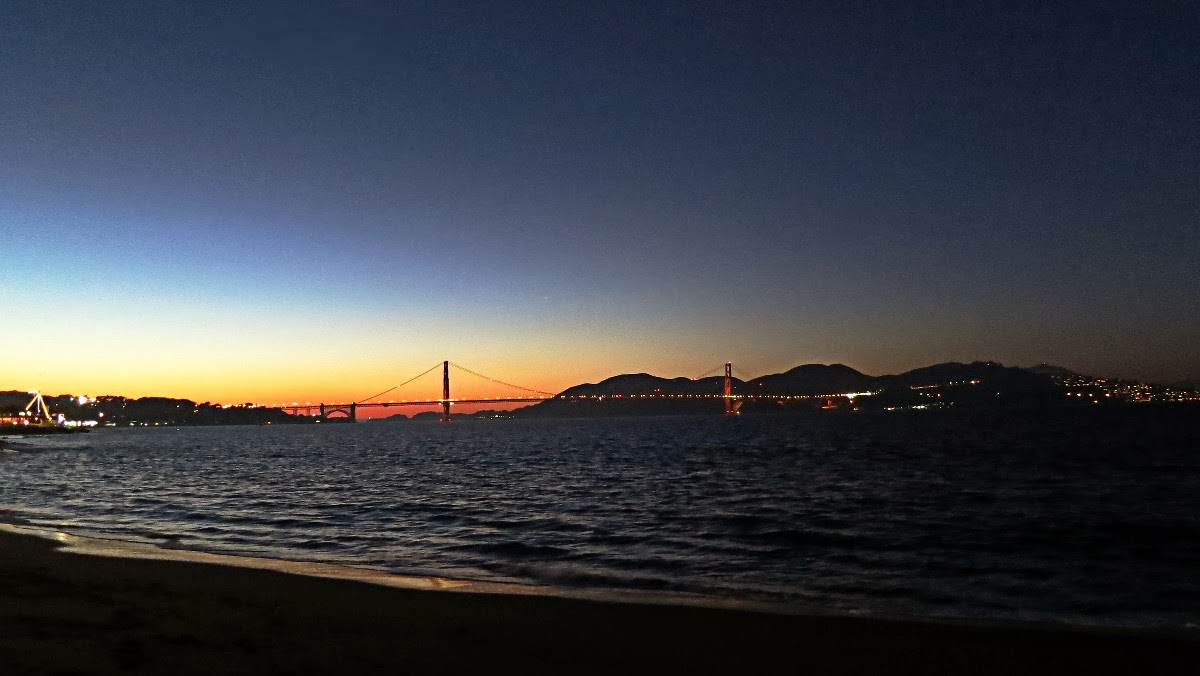 I was on a deadline tho, so eventually I moved on.  The deadline was a party for work held in deYoung Museum (in Golden Gate Park, which is oddly not by Golden Gate Bridge).

So I spent the next few hours of art, sushi, dancers, rum'n'cokes, pretzels, and shaking hands with SVPs, I found myself outside signing a log book. 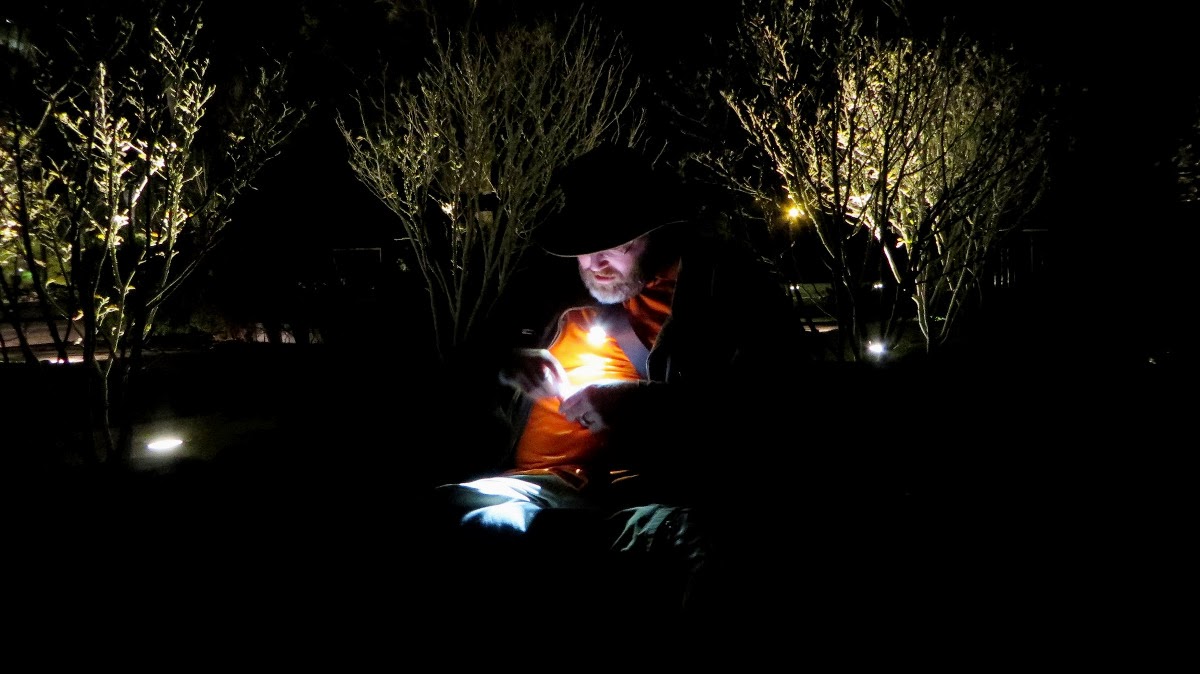 (really, this is my natural place anyway - and in my defense I was there with one of the planners of the shindig).  Afterwards I headed back to the hotel, completing a 360 one day whirl-wind tour of the bay.

Oh, and my final find count was 31 caches (we won't mention the DNF).
Posted by Dave DeBaeremaeker at 8:35 PM