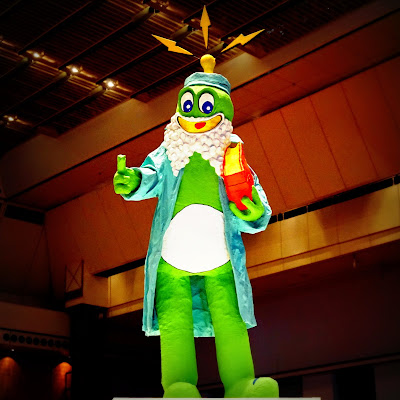 I was saddened to learn that a work trip was going to interfere with my plans to attend GeoWoodstock this year. However as a consolation prize, and a happy coincidence, I found I was going to be in the general neighbourhood of a Giga event.

Giga events are rare.  This is only the second one in the history of the world, and both happened in Germany.  So my chances of attending one any time soon in North America were remote at best.  So I jumped at the chance.

On Saturday I had the pleasure of attending the latest Giga event the Mainz Gutenberg 2015 event in Mainz Germany.

If you are not aware, Giga events are geocaching events where more than 5000 geocachers attend - all in one day.  To put that in perspective, the largest US mega event I am aware of had about 2500 cachers.  A Giga is a *lot* of geocachers in one place. 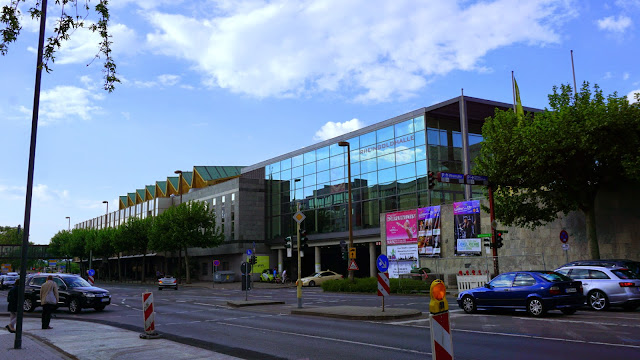 It does have a really large stone courtyard tho, which actually worked out well as many of the activities, and a lot of the food, happened in this courtyard. 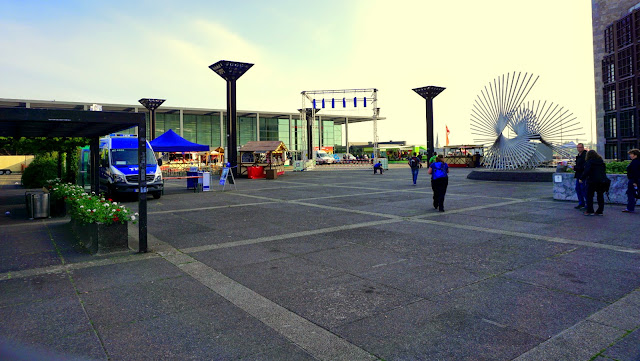 Despite my reservations, I had to admit that it did make for a fantastic location to host 5000+ geocachers.  There was (mostly) enough room (there were some choke points, but things soon thinned out to sane levels of human density).  Also the combination of the Rhine on one side, and the amazingly picturesque city view on the other, one couldn't help but be impressed.

I mean, how many Mega events have you been too where you get this as a background? 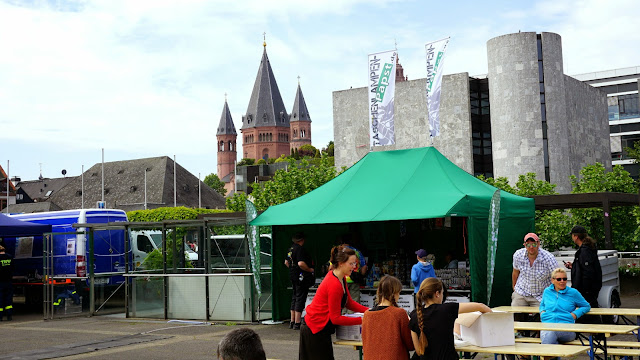 In the courtyard they had some pretty cool activities.  The first was a high ropes course.  Actually, given that there were several vendors selling climbing gear, I suspect this sort of thing happens a lot in Germany. 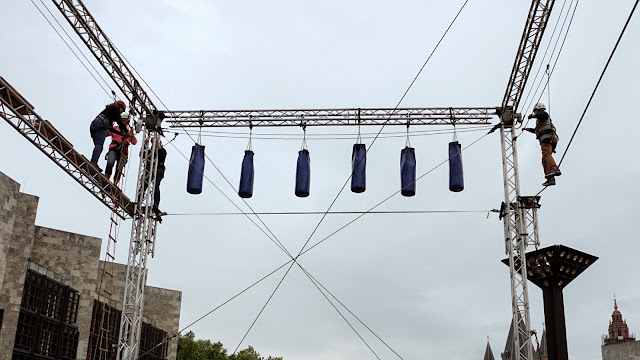 Some of the other events included a Segway course, and a European version of the GPS Maze exhibit (more on the maze in a follow-up post).

Of course, Signal was there as well. 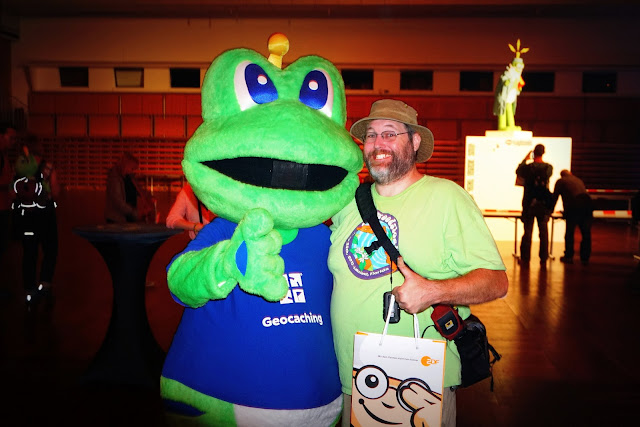 Many of the vendors were in the large hall space. They had some top names there like Garmin, Lens Laser, and Leatherman, as well as the usual assortment of geocaching specific vendors (tho generally the European versions) 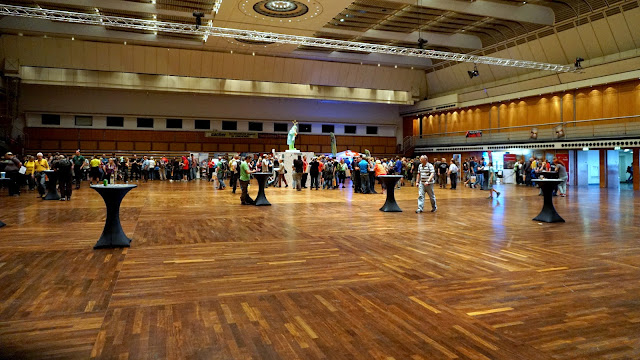 The log book was a large block with log sheets on all four sides, topped with a crackin' mannequin version of the events mascot. 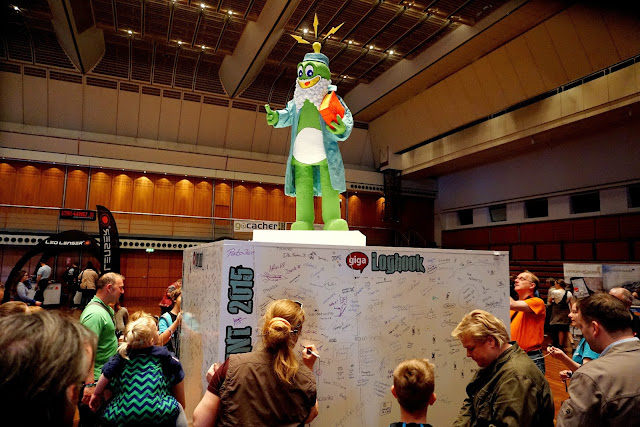 Although most of the attendees were European, as one may expect, the event certainly did have an international flare.  The map where folks placed pins in the locations where they are from shows visitors from literally all corners of the globe. I highlighted the foreign pins in green so they are easy to see in the map: 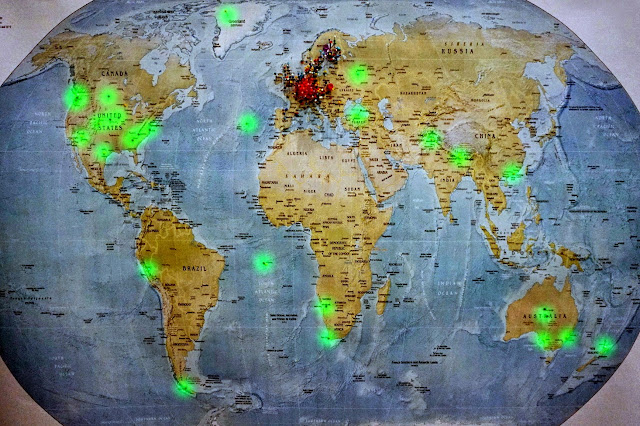 Suspiciously vacant of pins is the portion of the world known as Canada.  I placed my pin in North Carolina, as that is where I came from, however I remain a proud citizen of the Great White North. I kinda like the idea that I may have been the sole visitor from my homeland there (although the likelihood of other expats having visited from elsewhere can't be discounted.

The event was not devoid of other entertainments either.  The event was headlined by a rather rockin' rock band known as Gear Down.  They played a lot of the classic Rock tunes.  At the time this photo was taken, they were hip deep into Satisfaction by the Rolling Stones. 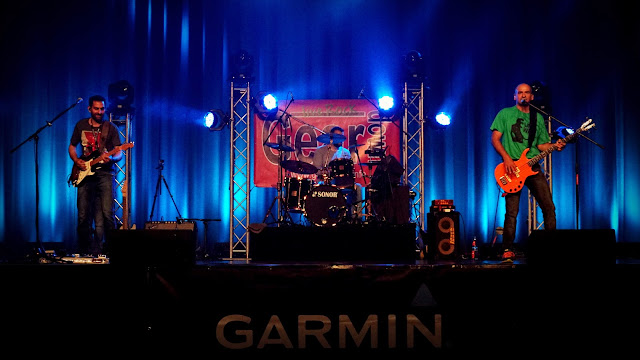 Note to other mega event organizers:  Your event should also have a rock band - just sayin'.

So this Giga certainly was an experience.  It was incredibly well run, and aside from feeling a tad claustrophobic at the choke points due to the sea of humanity, and being a tad oblivious to a lot of what was happening due to the language barrier I had a good time.

There were 30 lab caches, 10 for the Maze, and 20 strewn throughout the downtown part of the city.  Most of the lab caches were the typical "go to location, find word on sign, use word to log cache", but they were in some incredible places - they made a great tour guide for the town.  More on the exploration of Mainz in follow up posts.

The best part was really seeing all of the geocachers while out exploring the city.  Mainz has a population of 200,000 people but everywhere I looked I spotted geocachers.  I mean everywhere - in restaurants, on the bus, at historic sites, in the hotel lobby.  You couldn't get away from them :)  It was kinda awesome actually.
Posted by Dave DeBaeremaeker at 4:07 PM