~ or ~
How I Stopped Worrying And Love The Swiss 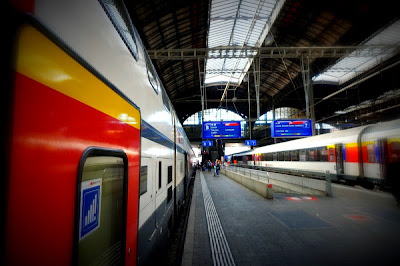 I had planned to take a train from Mainz Germany to Basel Switzerland, then another train from Basel to Zurich. From there I would negotiate the Swiss public transit system, and arrive at the apartment where my employer was putting me up for the next week (my main purpose for being in Zurich is business related).

So long story skipped to the middle, I did indeed successfully navigate the European rail systems and arrived at the corp apartment right on time.

All was well, so I decided I should email my wifey to let her know of my triumphs, and my current status as a temporary Zurich resident.   So I reach for my laptop, which is stored securely in my backpack.

Wait. Something is wrong. Where is my laptop? Heck, where is my backpack?!?

The sickening truth slowly descended upon me like blunt force trauma: I forgot my bag on the train - crap! (exact words expressed were a little harsher, but my mom reads this blog, so we'll stick with crap).

After a mild panic attack, I took stock of my situation.  I soon decided I should call the train company. The number is on the back of the ticket, and although my cell phone doesn't work here, the apartment is equipped with a phone. So eagerly I dial.  Nothing. Just some angry swiss words on the display which I could not read. Phone wasn't working. Time for Plan B.

Plan B: To the Internet! I pull out my phone and attempt to connect to the apartment wifi. Access error.

Likely fat fingered the password. No bigs. I try again.

So I tracked down how the Wifi was wired here (which is annoyingly not obvious), and started rebooting devices. 15 minutes of frantic debugging later I finally got connected.

I contacted a local co-worker via Hangouts, and soon came to the realization that my best course of action was to return to the train station and report the missing bag.  So thats what I did.

Upon arriving back at the train station I set about the process of locating the Information desk, where I was then directed to the baggage claim department, where I was informed that no bag had been turned in.  The clerk did, however, look up my train information and informed me that it would return thru the station in 65 minutes, and I could simply look for the bag on the train when it arrived. Otherwise it would cost me 15 Swiss Francs to make an official report of missing baggage.

He gave me the information I would need: track and destination (Track 9, Basel), and the time of expected arrival.  However he also told me to check the big board in the station as tracks sometimes change.

This, of course, made me paranoid.

Plus my faith in this system was low.  No way would an unclaimed bag stick around for 3 hours in America.  Heck, likely not even in Canada.  It would probably cause some sort of bomb scare. However I've heard stories about the Swiss being polite people who like to mind their own business, so I figured I'd give it a shot.

At this point, what did I have to lose?

So I set about waiting.  As I did I thought about what else might change, so I started tracking down every train headed to Basel (tip: there are a lot of them).  I talked to many friendly train workers, and looked in many train windows, but alas no luck.

At this point I expected security to come talk to this strange bloke pacing the station looking like a nervous ninny (at least my look was honest, I *was* a nervous ninny).  As I paced I thought of all the things in that bag that I would lose - a fair amount of cash, my jacket, travel adapters, my work laptop... heck, even the chunk of German Mountain Cheese I bought at a farmers market in Mainz! (I think that you'll agree this is a truely sad situation - you can replace almost anything, but as a Canadian living in the US, it is almost impossible to replace Germain Mountain Cheese!)

So finally the big board updated itself and a train was scheduled to depart on Track 9 about ten minutes before the time I was given for its arrival - so I focused on that train.

I paced some more.

I rushed over to the train, and started going thru the cars, looking in the spots where I was sitting in each car (I couldn't remember which car I was in - just that I was in First Class - which narrowed things down a bit).

Finally I spotted it.

I rushed over. Is it?

Yes it is! My missing bag was in my hands! Success!  Other utterances of joy!

I turned around, and quickly explained to the amused looking old Swiss gentleman who was staring at me that I had lost the bag, but found it again. I kind of expected him to think I stole it, but he just smiled at me, so I rushed off the train.

A quick tram ride later and I am now back in the corp apartment, typing this story on the laptop I lost, while eating my German Mountain Cheese, and drinking milk from a wine glass (cause, why not?)

I am also thankful for the Swiss folk for being awesome about other peoples belongings, and who don't consider every abandoned bag a bomb scare, or some personal treasure to claim as their own.

I think I am going to enjoy Switzerland.