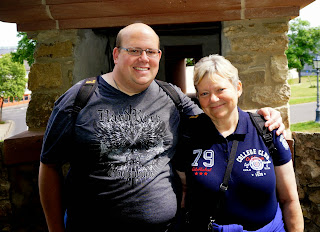 One thing that seems to be universally true is that if one shows up at a cache with other people around, flashing a GPS and beaming with a sense of adventure, one typically makes quick friends.

This truism was confirmed during my first day in Mainz Germany.

I landed at 7:30 AM in Frankfurt, and made it to Mainz around 8:30 AM. I did not speak the language, or really have a plan, except I had a GPSr with fresh batteries and loaded with geocache listings.

So I checked into the hotel, dropped by suitcase, then hit the town to go adventuring.  Almost immediately I started running into geocachers.

After lunch I entered a park on top of a hill in search of a cache. When I was there I ran into a geocaching duo (I believe it was mother/son, but not entirely sure).  They were doing the same geocache I was, so we teamed up.

After the cache was located and the logbook signed, they happened to be going the same direction I was, so I tagged along.  Pretty soon we decided to team up for the afternoon. We did a lot of lab caches, and regular caches together.

The gentleman, who's caching name is schaefix, spoke decent english so we were able to communicate a bit.  The lady did not speak a word of english, but we shared a few laughs anyway.

It was handy to have german speakers to cache with as several of the caches we did were in German only, and many of the signs I needed for the lab caches were also in German, so I got a lot more out of the experience of exploring the town then I would have otherwise.

By the end of the afternoon, fresh from hunting down an 8 stage multi-cache, we stopped at an outdoor restaurant for a pint. 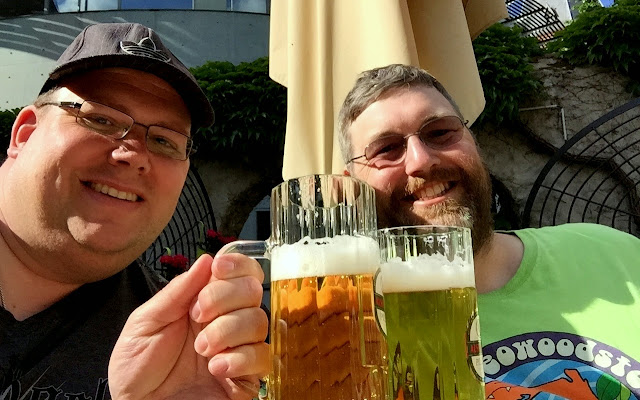 All in all a great way to spend an afternoon.

During the remaining 10 days of my trip (details to come) this experience repeated itself, in smaller scale, a couple more times - once in Zurich, once in Feldkirk Austria

So let this be a lesson. If you are going to travel abroad, be sure to show up with a sense of adventure and enthusiasm, and a loaded GPSr, and you very well make some friends you never expected. Geocaching, it seems, is universal.
Posted by Dave DeBaeremaeker at 2:22 PM