For the 15th round of the +Chrysta Rae Photo Scavenger Hunt, one of the items on the hunt list was Hang In There.

The idea for Hang In There came to me relatively quickly, but it would prove to be one of the most complex photos I've ever created. I figure I'd document some of the process of making this shot.

So, the following is a behind the scenes exposé of Hang In There.

All of the editing was done in GIMP.  The shots were taken with a MotoX for the backgrounds, and a Sony a6000 for the minifig shots.

The concept was a moody scene that featured a Lego minifig hanging from a noose in the foreground, and in the background the soul of the same minifig meeting Death.

I didn't have a suitable Death minifig, so I hit up bricklink.com to order some parts to make one.  This meant I had to wait before I shot the main subject of the photo.

In the mean time, I had a specific scene in mind for the background.  The problem was I had no idea where I could find such a scene in real life for me to photograph.  I wracked my brain, and had come to the sickening realization that I may have to result to using some stock photography off the Interwebs. I had used such stock photography for my other Lego art, but it seemed wrong in this case since I was submitting this to a *photo* competition (even tho the rules do seem to permit it - one thing about the hunt is that the rules are few, and even then they are more guidelines than actual rules).

With the niggling thought of going half-assed with the background in mind I hopped onto my bike on a foggy morning and started my daily commute to work.  90 seconds later I slammed on my brakes, skidding to a halt.  For what lay before me was the most perfect tree for a hangin' (of a minifig).  So I stopped and took some photos (with my cell phone camera, no less). 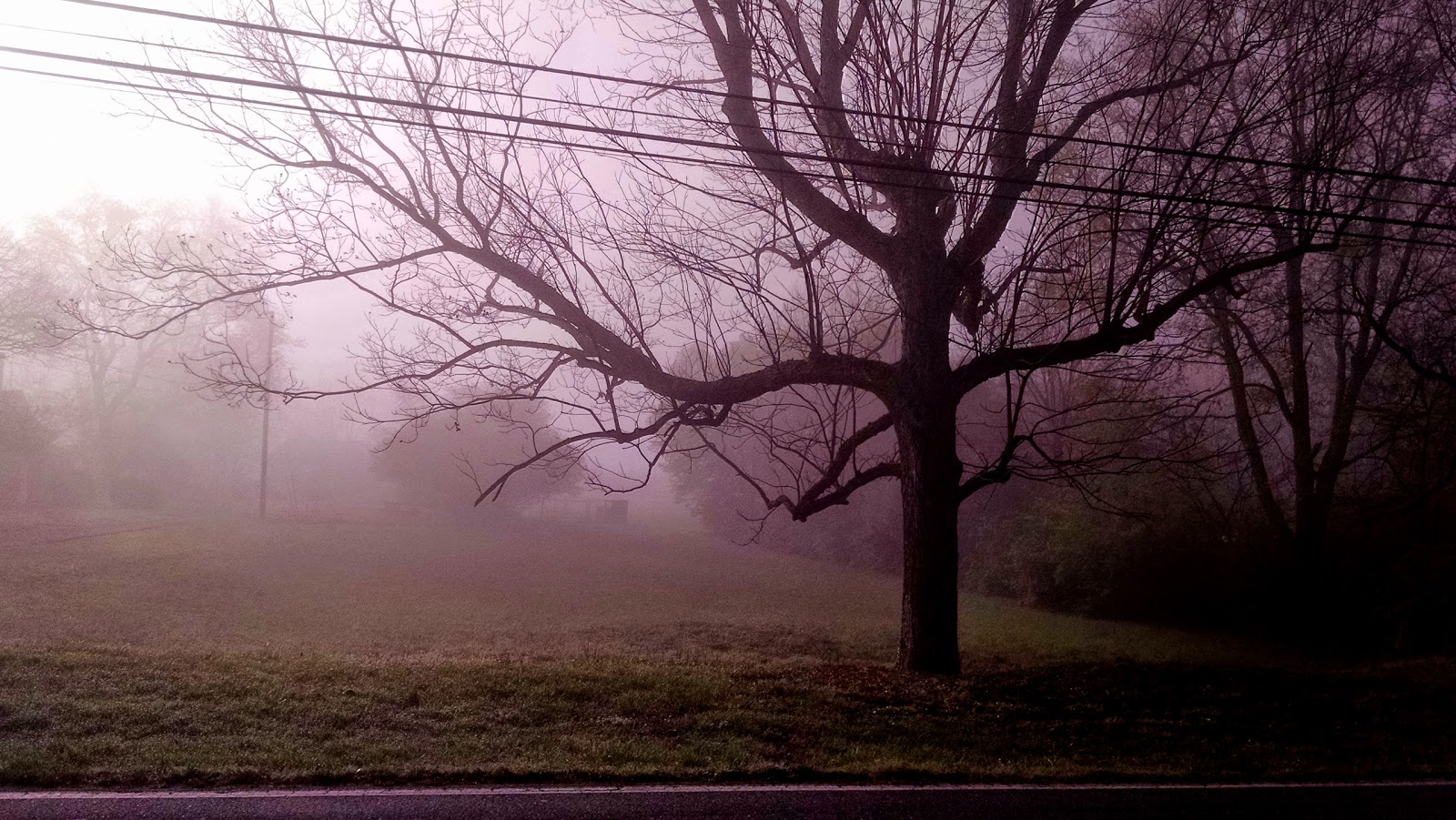 300ft further down the road lay another nice foggy scene that would make a kickin' background, so I stopped for more cell phone photography: 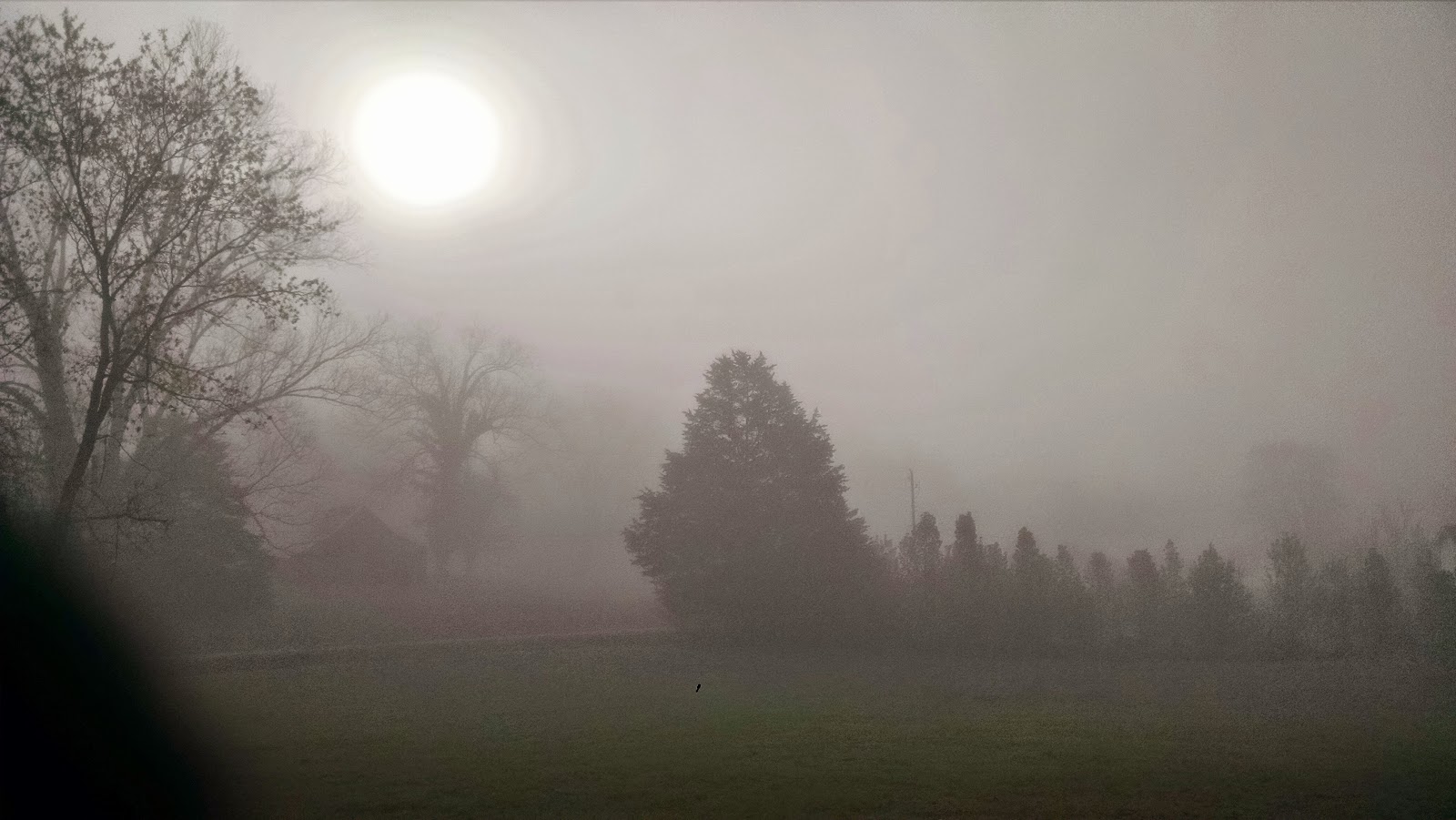 1000ft beyond that, at the Baptist church on the corner, was a cemetery which seemed the perfect mid-field scene, so once more I stopped and pointed my cell phone lens and clicked the shutter: 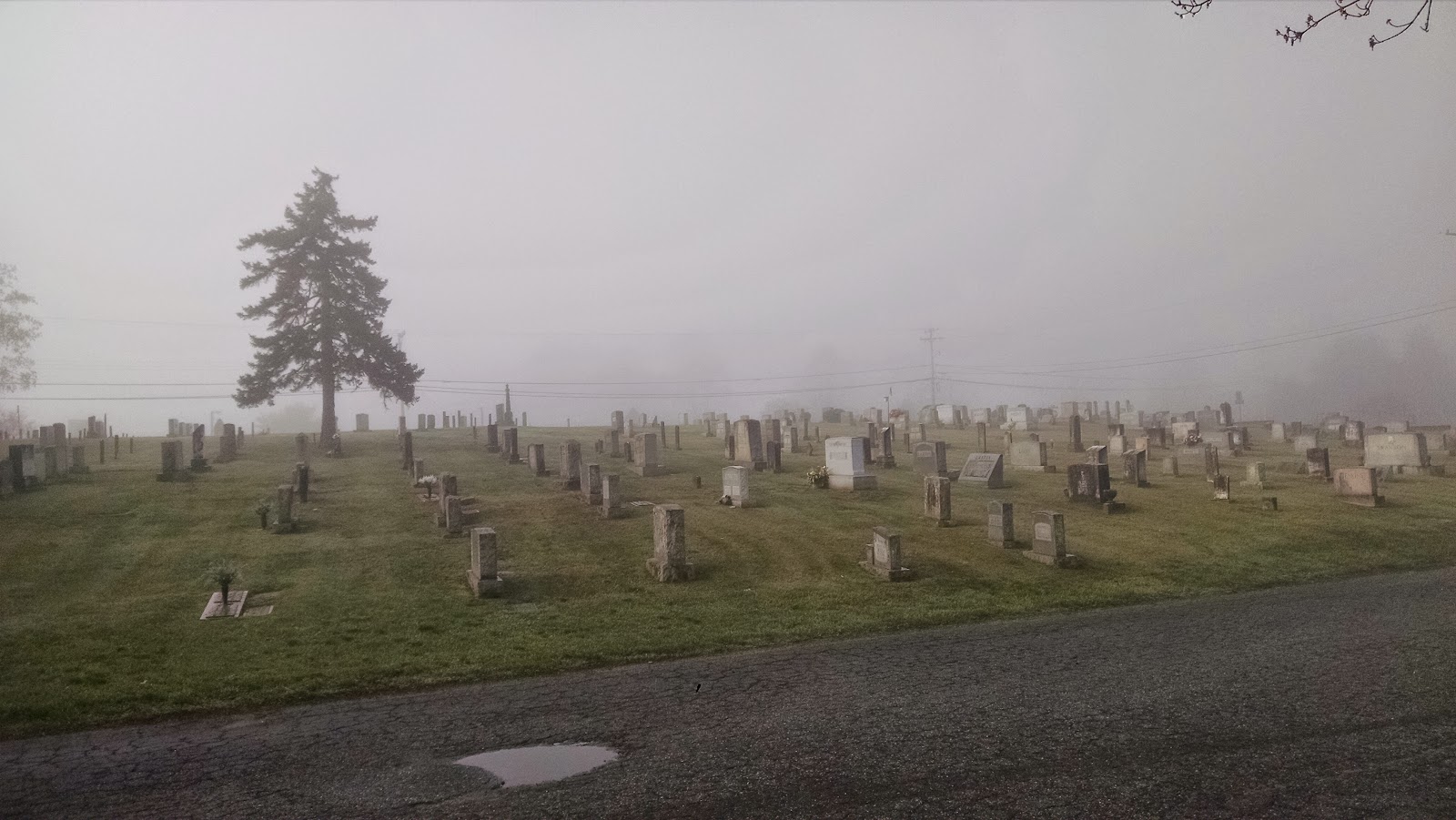 So, completely chuffed that I got the makings of my "impossible to find" shot within a 5 minute bike ride from my house, I headed off to work.

When I get home, I loaded up M*A*S*H on Netflix, and started the long process of merging the three files together.  It took me over a season to get something I was happy with (ever try to mask out a tree? :) 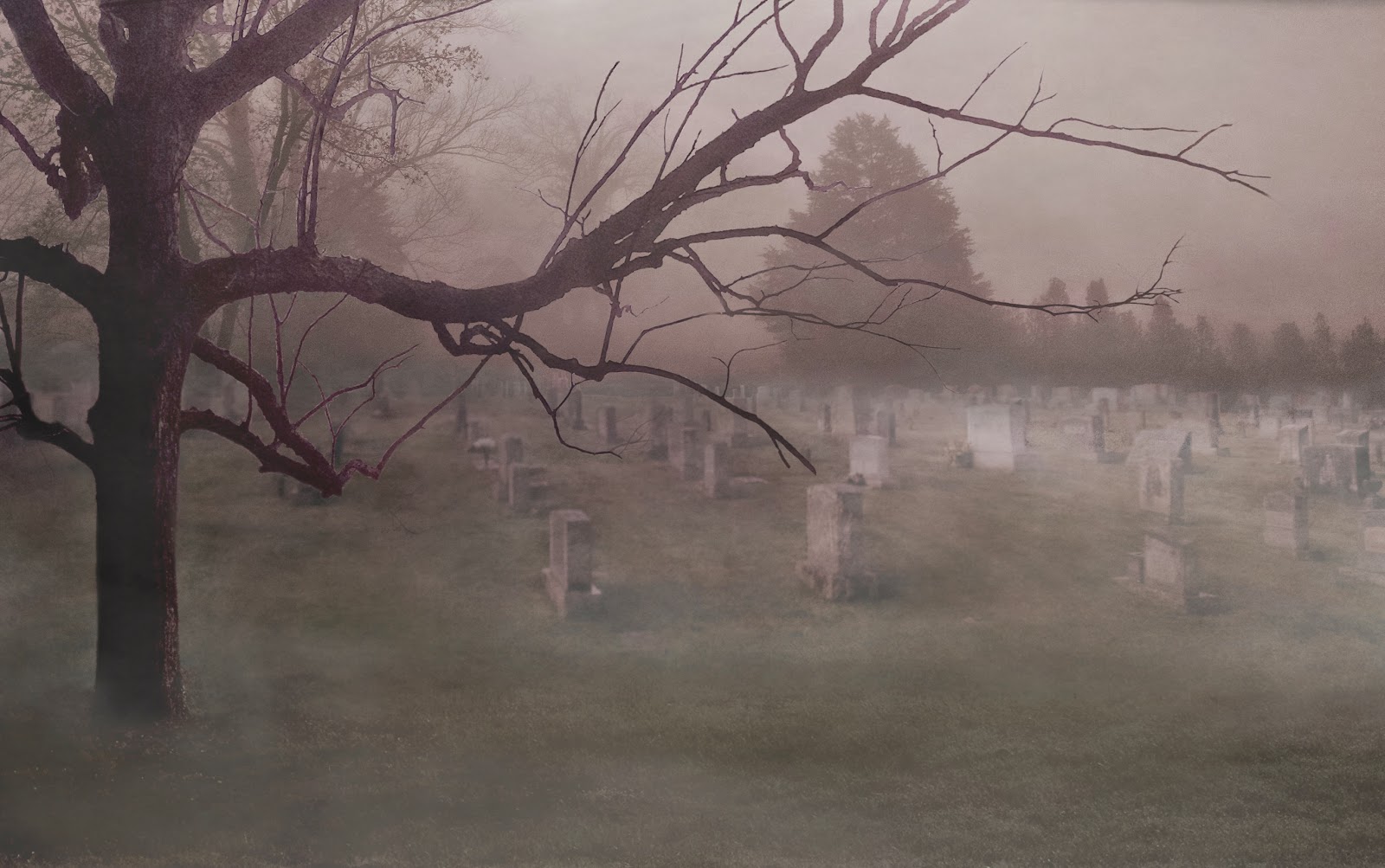 Most of the process of merging was masking out the parts of each scene I didn't want. Then overlaying them in a way that made sense, then smoothing the seams by adjusting the edges of each mask with semi-transparencies, and adding more fog with the paint tool on various semi-transparent settings. I also used the good ol' dodge/burn tool to darken some of the branches on the tree in the foreground.

I also added some foggy bits by using the Plasma Cloud tool on a new layer, converting that to black and white, then setting the transparency to resemble fog. I further masked out some of the plasma cloud parts, and left others, which allowed me to control where the fog lay in the scene.  Creating a layer like this also makes it easy to add some consistent fog over multiple layers, which helps merge two layers together more seamlessly. I used this trick a lot.

Now that I had a background, I needed to set up my main subject: the dead guy.  First things first, I Googled how to tie a noose, then I figured out how to do so using a piece of bailing twine.  I grabbed a scarecrow minifig and set up the shot:

If you notice, I have some fishing line coming from his legs.  This is to weigh him down a bit, so the "rope" stays taught.  The minifig is not heavy enough to do this on its own, and tends to curl up.

First step was to mask out the background, and resized the results to fit the scale of the background.  I used a cage transform tool to twist the body a bit in order to give the head a more "hanging from a rope" effect.  Before I did that the effect was more "flying live guy" than "hanging dead guy".  I also adjusted the lighting to be more shadow-y, and used a combination of transparency masks and the brush tool to add some more fog effects.

I also used the paint and clone tools to close his eyes, and remove his smile.  The result was one convincing hanged guy.

Now, on to the Grim Reaper. 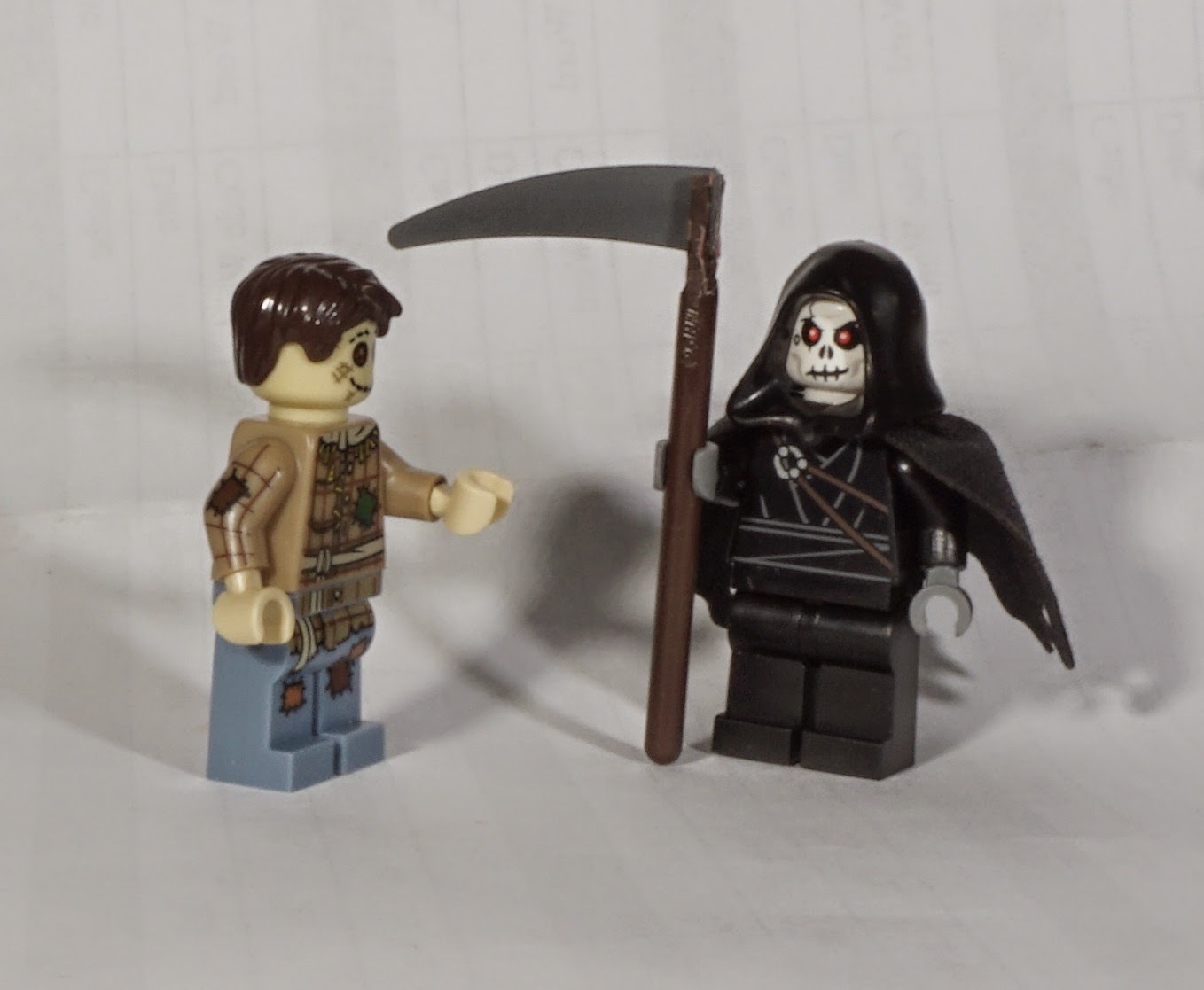 I couldn't find a satisfactory scythe for Death online, so I set about making one.  Using a brown spear, and a dragons claw, and with clever application of a Dremel, I turned the bits into a passable scythe. Death himself is a Nazgul (from Lord Of The Rings) with a skeleton head.

I masked out the background, and added the fog effects - the exact same process with the main subject above.  To give a more ethereal impression, I added some drop shadows for the glowing effect, and a slight motion blur to give the idea that the dead guy's soul came from the hanging body.

I also added a Supernova effect to Deaths eyes to give them a slight glow effect.  Finally, I used the paint tool to add shadows for each minifig to give the impression they were either on the ground, or hanging above it, depending on the situation.

I finished off the piece by adding in some more fog effects to give a more consistent look.

Putting it all together gave me my final shot: Hang In There 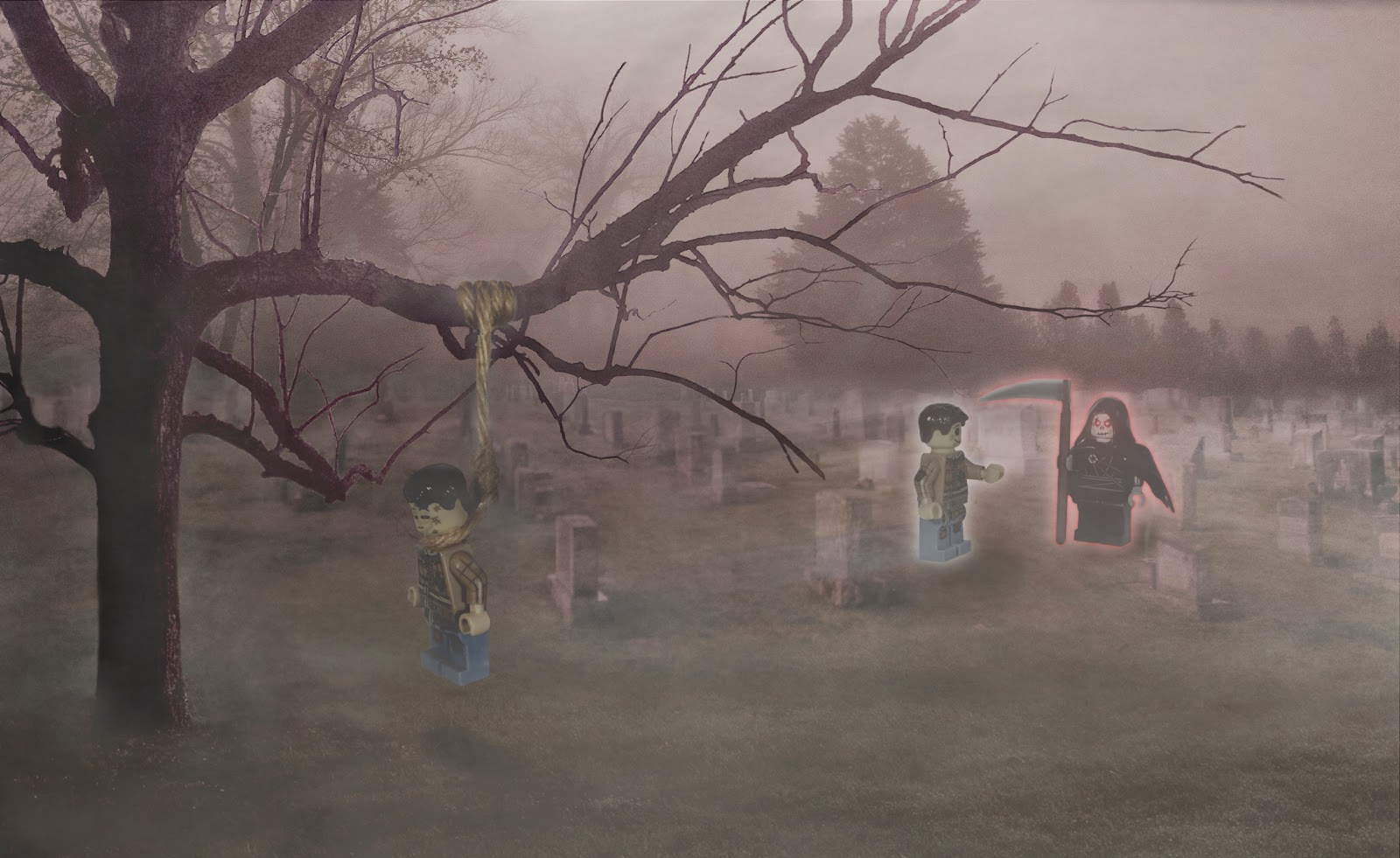 Posted by Dave DeBaeremaeker at 7:34 PM