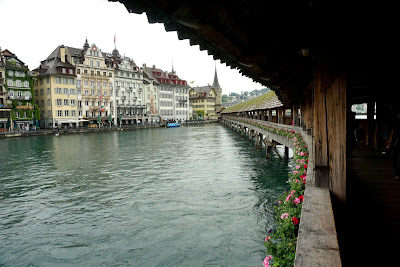 Lucerne Switzerland is an amazingly beautiful city. One of the highlights is Kapellbrücke, or Chapel Bridge.

Kapellbrücke a covered wooden foot bridge.  It spans the Reuss River, and is 560ft long. It was originally built in the year 1333 as part of Lucerne's fortification (which seems bizarre to modern minds that a bridge would defend much, but in 1333 it likely served its purpose well).

Among its other points of interest is that it is the worlds oldest surviving truss bridge, the oldest wooden covered bridge in Europe, includes a large octagonal stone tower part way along one side called Wasserturm (literally "water tower"), and is home to a geocache (which now has my signature, 'natch).

It is also unique in that it is one of two bridges of this sort (the other being Spreuerbrücke, also in Lucerne), that contain triangular paintings all along its length. 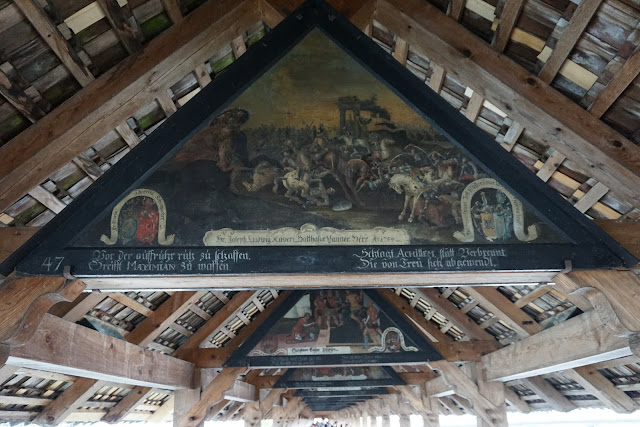 These paintings date back to the 1700s, and depict events in the history of the city. There were originally 157 paintings, however some were destroyed over time, and many more during a fire in 1993.  Now 47 paintings remain along the bridge.

It is a very pretty bridge, don't you think? 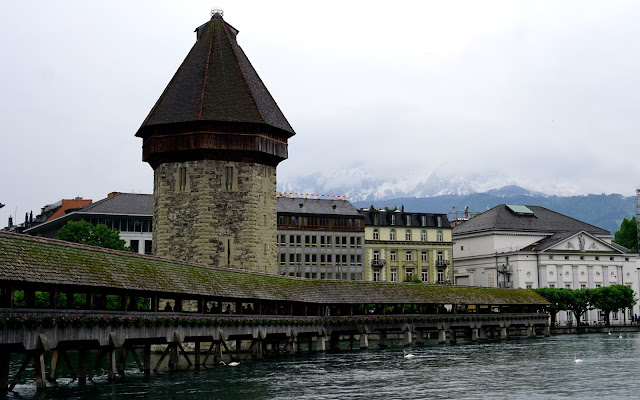 Kapellbrücke is definitely a highlight of Lucerne, and reason enough to visit the area (ya know, if the Alps are not already enough). However the city holds some more great bits of history.  Stay tuned.
Posted by Dave DeBaeremaeker at 9:14 PM