The Great Canadian Road Trip: Bison In The Mist 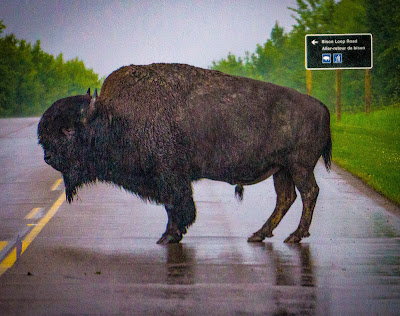 When last we spoke of the Great Canadian Road Trip, Liz and I were off in search of bison.

We had awoken at 5am that morning in a vain attempt at a sunrise, but were thwarted by rain. So we made a retrograde maneuver, jumped into the Geovan Of Destiny and headed off in search of bison.

If you haven't guessed yet, this is the post about the bison.

Elk Island National Park is home to a wild heard of wood bison. Note that the proper term is bison, not buffalo as is commonly thought. Despite the fact that this misnomer has been going on since the 1500s, and for reasons too complicated to get into here, I will stick to the name bison to refer to these magnificent creatures as there is a small but vocal minority who will feel the need to point out the inaccuracies of the buffalo thing (one of which is my wife, and I don't need that sort of domestic drama at present, thanks!)

Anyhoo, we arrived at the aptly named Bison Loop Road, and sure enough there were bison hanging out (this was not a sure lock as we had driven this loop twice already on previous days and had not seen anything). Thrilled at victory, we armed ourselves with the big glass, and set off around the loop to photograph the herd.

One of the first things we saw, actually, was a coyote hanging out midst the herds. He quickly scampered off into the woods, never to be seen again. 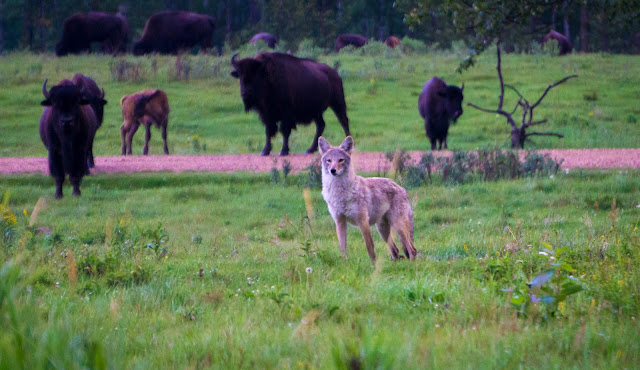 The herd was distributed over a wide series of fields, and consisted of a large number of animals (a scientific estimate ranges from "quite a few", to "a whole mess of 'em"). 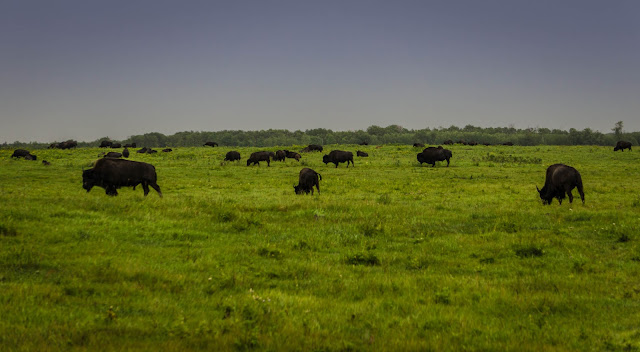 Since these are wood bison, it was not unexpected to find some bison in the woods. They seem to rut against the trees.  This one is calling out as he didn't like our presence. Their noises are more like constipated grunts than mooing, which is a little off-putting (if you get a mental image of a drunken scotsman trying to angrily yodel, you'll get the rough idea of what they sound like). 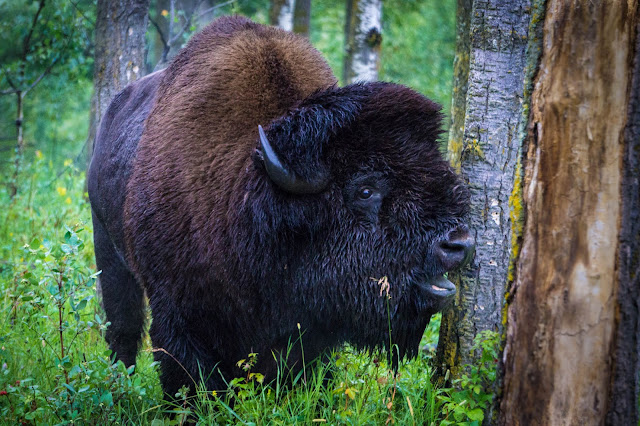 This one looks like he's ready to charge (spoiler alert: he didn't). 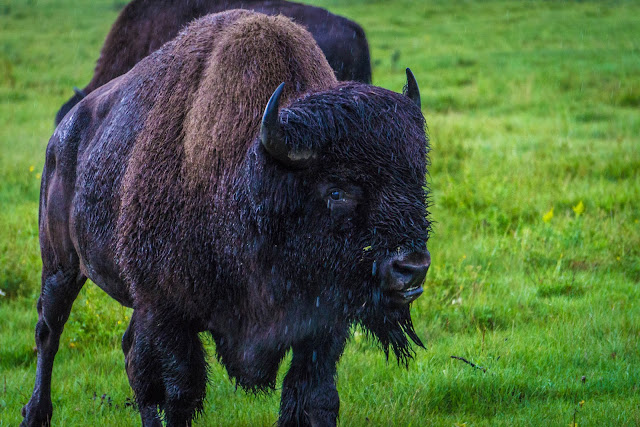 Some of the bison liked to paw out (hoof out?) a bare spot of mud and wallow in it. 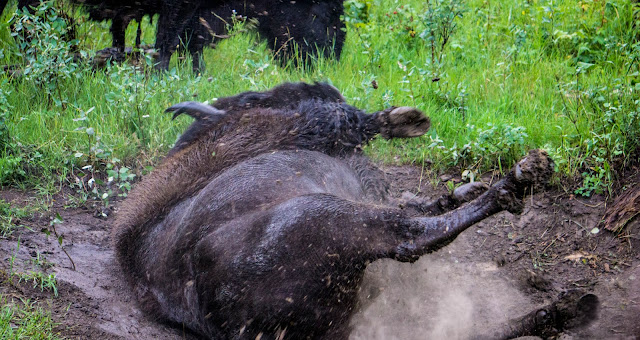 These are magnificent and rather daunting creatures. With those horns, I certainly would not want to tangle with one.  They really demand ones respect. (I call this one "Sir.") (please refrain from any "buffalo wing jokes". For one they've already heard them, and two, please see the fourth paragraph above.) 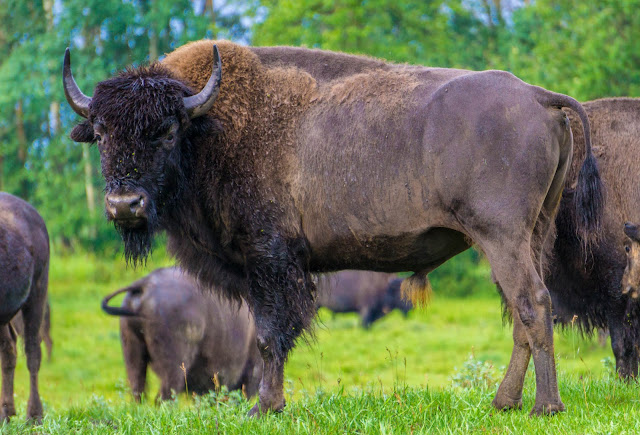 A couple of males fighting for dominance.  They butted heads several times before one backed down. 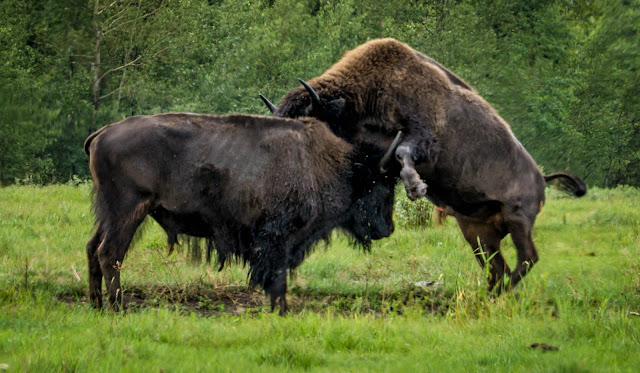 Of course it would not be a proper herd story without some pics of the calves. 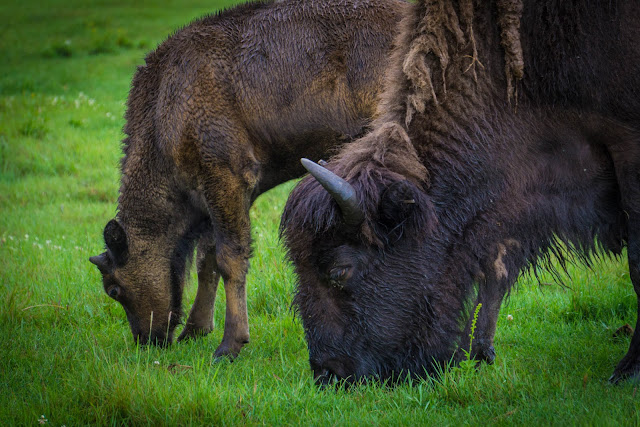 One last shot of a baby bison before we head off down the road. D'awww. 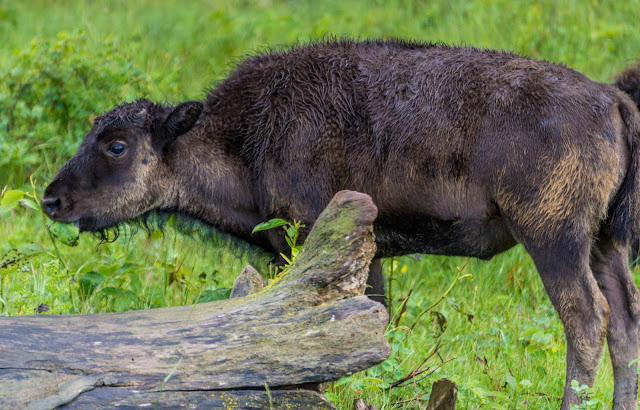 We ended up spending a couple hours watching the bison. After the first time around the loop we headed back to the camp to pick up my wife so she could see the bison as well.

So thats the bison.  After this we packed up camp and headed to Red Deer for a different kind of photography all together, which was a new experience for myself.

Stay tuned!
Posted by Dave DeBaeremaeker at 12:55 AM