One of the words for this last round of the Scavenger Hunt was "trunk".  Now that those images have been revealed, I can discuss what went into it.

As has become my custom I started with a mind mapping exercise.  I list all of the words that remind me of trunk in a notebook, then list associated words with those, and work my way down to an idea.  Sometimes those ideas take minutes, sometimes they take weeks. This one had a nugget almost immediately, but took weeks to refine.

My first idea for trunk was inspired by the Tragically Hip song "Locked In The Trunk Of A Car" and had the idea of a car trunk lid being opened by a mysterious hand.  There will be lights and smoke, and be very dramatic.

After a while I decided to switch away from the car trunk (mainly cause I don't have one - minivans4life) be an travel trunk - like old timey luggage trunk, you know the type.

Of course I don't have one of those either (well, I do, but not one that will work for this purpose). However a toy photographer is never really stymied by scale, so I decided to make it a toy hand.  Since it is a "rising from the dead" situation, I used the skeleton hand from my Grim Reaper figure.

Now I may not have a toy trunk, but I do have a Makerspace at work. In that Makerspace are 3D printers, and a Glowforge laser cutter.  So I could make my own trunk.

I wasn't exactly sure which one would make a better trunk for my purposes, so I made one with each.  First the 3D printer. Looks like this in action: 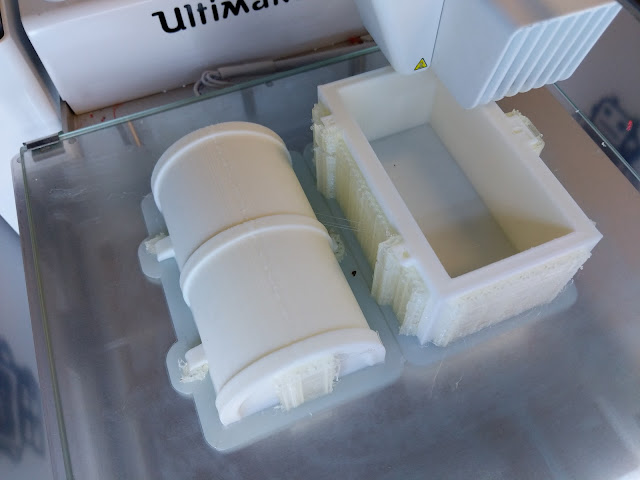 It takes about 13 hours to print, but it produces an almost perfect finished trunk when done: 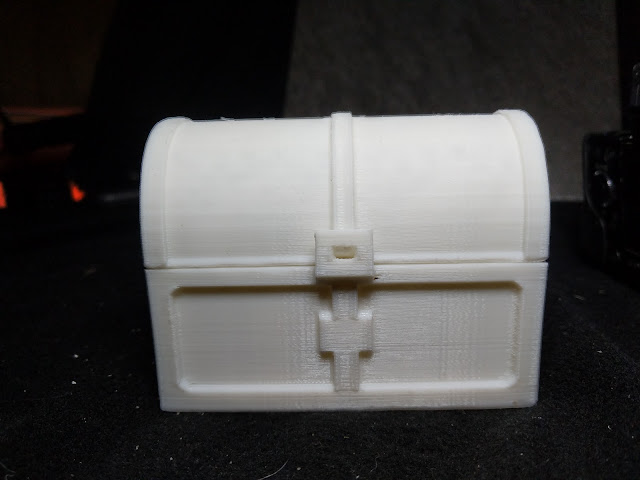 The Glowforge was next.  It cuts the parts in as little as 15 minutes, but it does require assembly afterwards. However it becomes much more photogenic. 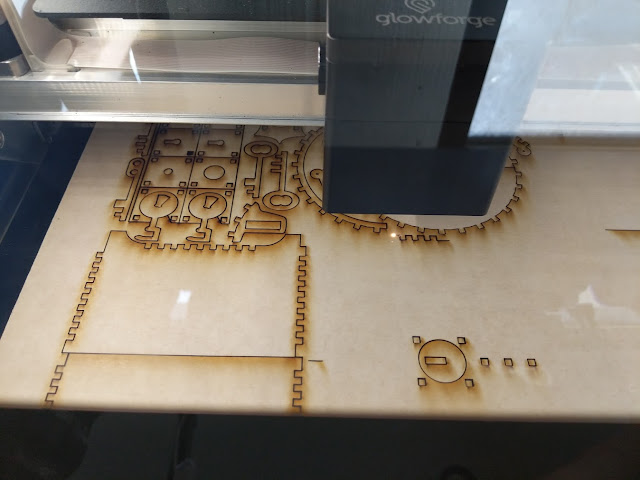 The final cut out template: 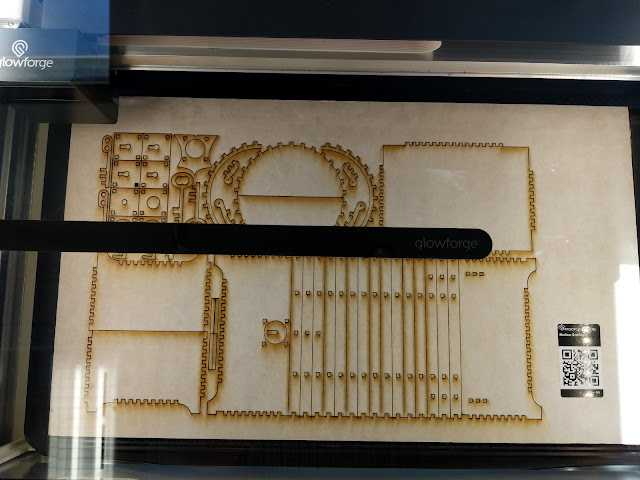 And the final image.  It took me about 20 minutes to assemble, mainly because each piece has masking tape on it to protect the material from scorching when cut by the laser (did I mention it has a laser, cause I totally freakin cut things with a laser, y'all!)

The assembled trunk is here: 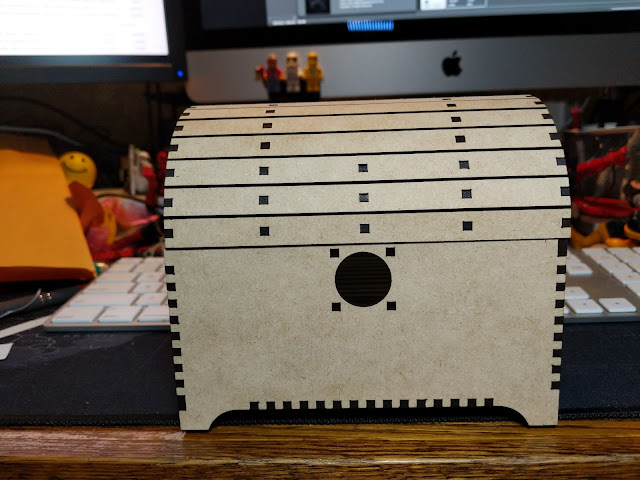 I decided that the Glowforge trunk would work best for the shot I had in mind, so for the moment I put the 3D printed trunk aside (tho I did end up using it for the image I submitted for "diamond" so not all is lost).

I painted the trunk red.  Why red?  Because it was the paint I had available.  I am glad I did because inspiration was lurking in the back of my demented brain.

This is the shot straight out of camera: 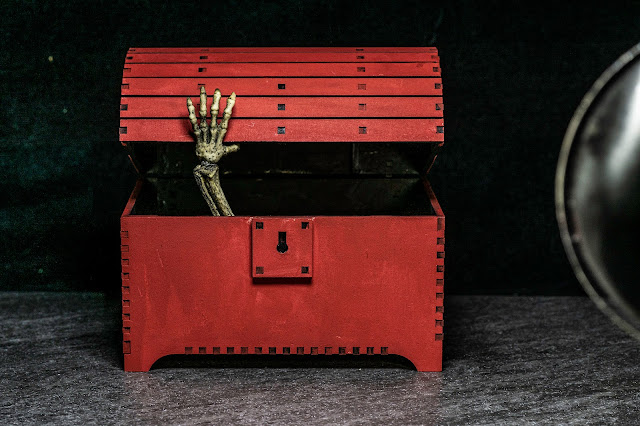 This is when inspiration struck.  Seeing the red trunk made me think of an old Canadian kids show called Mr Dressup.  Mr. Dressup had two puppet friends, a kid named Casey and a dog named Finnegan, and he dressed up in costumes to tell kids stories.  Basic 70s-80s wholesome Canadian kids show stuff.  He kept his costumes in a red trunk with hippy flowers on it, called the Tickle Trunk.  You can see him in action, with the trunk, in this YouTube video: Mr. Dressup Episode Pt. 1 1986

Now, when I was in high school (late 80s, early 90s) there was a urban myth going around the school that Mr Dressup killed himself by locking himself into his Tickle Trunk.   I don't know how extensive that myth spread, but it was all over my school.  Apparently it stuck with me, I assume for this purpose.

Anyhoo, working on the trunk sparked that memory, so I decided to use the sordid tales from my misspent youth and make this image the return of Mr Dressup, rising from from the grave that is his beloved trunk.

So I added in the flowers, dust, and cobwebs.  To sell it I also added the head of the Casey puppet abandoned and rotting on the floor.

This is the final image: 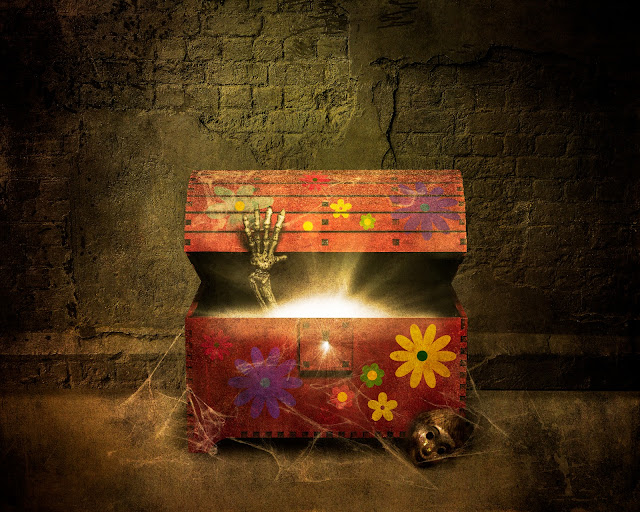 Thus is the story of how I conceived and created this image for the word "trunk".
Posted by Dave DeBaeremaeker at 7:41 PM