Some are more complex than others, so today we'll cover several words at once.

Interestingly all of these words have something in common.  That thing being I had a lot of trouble coming up with an idea for every single one of them.  In some ways I still think I lack an idea for earring.

However I managed to overcome the lack of ideas using a couple different methods.

Imitating previous art sometimes works to generate ideas.  I happened to own a life sized baby Groot, so I decided to take a page from a scene from Guardians Of The Galaxy Vol. 2.   The scene where Groot presses the button on the bomb... you know the one.

Once I had the concept, it was a quick setup and shoot to come up with this image:

Food items tend not to excite me creatively.  I'm more of a food eater than a food shooter.  As a result this was one of the last images I shot.

I have a trunk full of 6" action figures.  In search of ideas I was digging thru my collection, playing around with figures and accessories.  Sometimes just playing with figures, trying poses, and seeing how accessories look is a good way to generate ideas.

In this case I picked up Thors hammer,  and thought to myself that it could look like a chocolate bar. Then I thought I could show the hammer with a bite taken out of it, or something.  Playing around in Photoshop I eventually came across the idea that a lightning bolt would be the best effect.  Of course, lightning is powerful, and hot, so the chocolate would melt and splash. 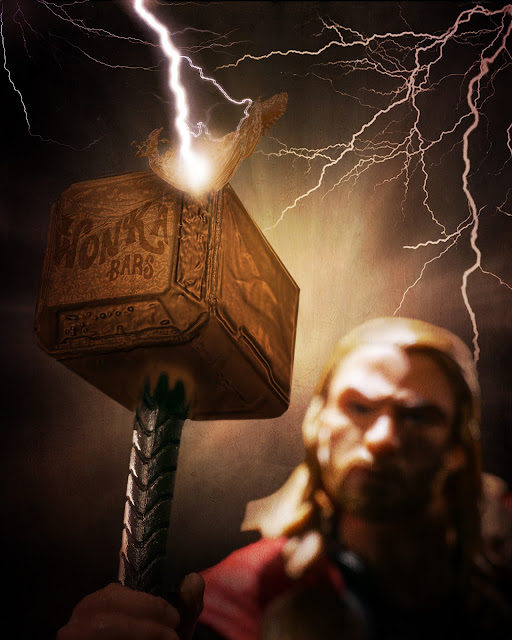 More food.  Nerts!  This was one of those few times where my first concept was finished before ultimately being abandoned.  I started with the idea of using donuts as elements in a landscape, and adding in a subject.  I sacrificed a dozen donuts and came up with this: 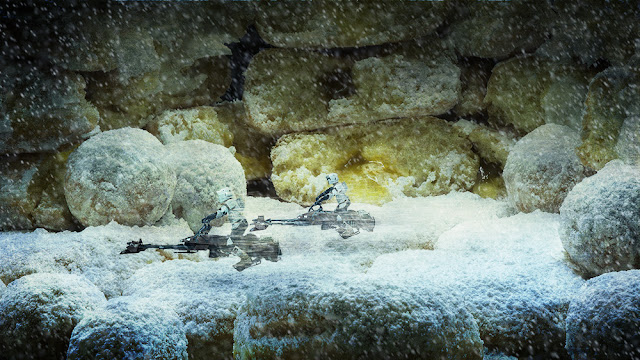 I never did like this image.  It used donuts, but it doesn't really have a point beyond that.  It just never ended up tickling my fancy.  So I kept it as a backup, and kept looking.

Before this round of the hunt began I bought a 12" Iron Man figure, in his Mark 4 suit.  This is the suit from Iron Man 2.  In the movie Iron Man is shown eating donuts, while sitting in a giant donut.  The figure came with a donut and a box.

I decided that maybe I should try to recreate that shot.  However then I remembered that a Dunkin Donuts had opened up in town, and I could take a shot of Iron Man eating a donut in front of an actual donut shop, using forced perspective to make it look realistic.

So that is what I did. I grabbed my son and my wife and headed to the donut shop. My wife helped hold a Lume Cube to add in some fill light, and my son help clear some grass from my shot, and hold a reflector.

I set up Iron Man on a concrete parking stop, about 100ft away from the building. 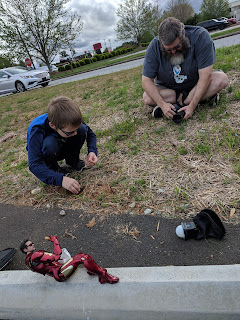 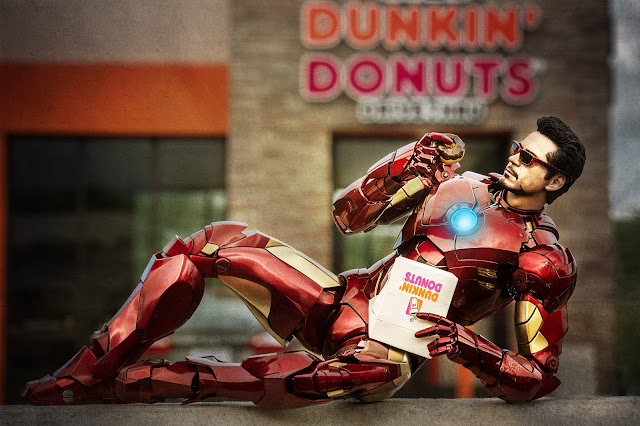 Another word I had no attachment to, so ideas were hard to come by.  The only idea I could think of was taking a shot of an earring in an ear, but that seemed predictable and boring.  However as the deadline approached I had no other ideas so I went with a shot of an earring in an ear.  However, to keep the theme, I used toys, so I grabbed the only action figure I had with a well defined ear, Iron Man (same one as used for donut).

I then used actual creative thought to determine what sort of earring Tony Stark would wear, and decided it should be an Avengers earring.  Lacking one, I created it using the 3D editor in Photoshop.

This is the final image.  It is my weakest one this round from a creativity perspective. It is, however, not the only time I would craft props using the 3D editor in Photoshop. 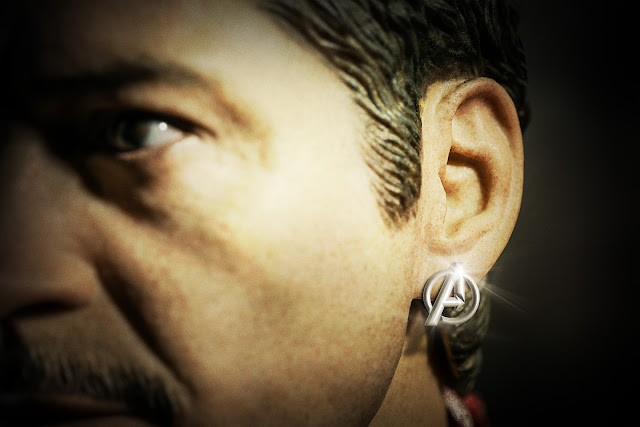 Next time I delve into a pair of images that share a concept, based on the colour words, so stay tuned.
Posted by Dave DeBaeremaeker at 7:51 PM