Let me be completely honest.  I was kind of super annoyed when I saw "olive" as a word on this list.

I really dislike olives.  I don't like how they taste, or how they smell. They don't even look good.  Even the colour olive is drab and boring.  It has no redeeming qualities for me whatsoever.

So it is a creative dead end for me.   To top it off olive was on the previous hunts list, so I already spent a lot of time fighting my dislike of olives to come up with an olive image (which was nominated for a Photoshop World Guru award, for what thats worth - #humblebrag).

So I wanted to get this out the door as quickly as possible.  I did get the idea of Popeye interactive with Olive Oyl.  I looked up Popeye action figures, and they were all super expensive.  Not to mention I'd also need an Olive Oyl figure, which were also expensive.  So I abandoned that idea.

Left with no other options I figured I'd try to shoot my arm holding a bouquet of roses.  I hoped I could make it look like Popeye by distorting my arm using the liquify tool in Photoshop to give it that Popeye forearm bulge, and comp in his anchor tattoo.

I had no idea if it would work.  But the only cost was a bouquet of flowers, that ultimately was given to my wife, so no harm in trying.

As it turns out the idea worked out pretty well.  Liquifying my arm turned out great.  The rest was simple toning.

At the last minute I decided to add in the background (which came from my library of images - it is a door in Savannah GA), and adding the nameplate, just to sell the point these are for Olive Oyl.

It is not my favourite image from this hunt, but I got some great comments when it was revealed, so who am I to argue? 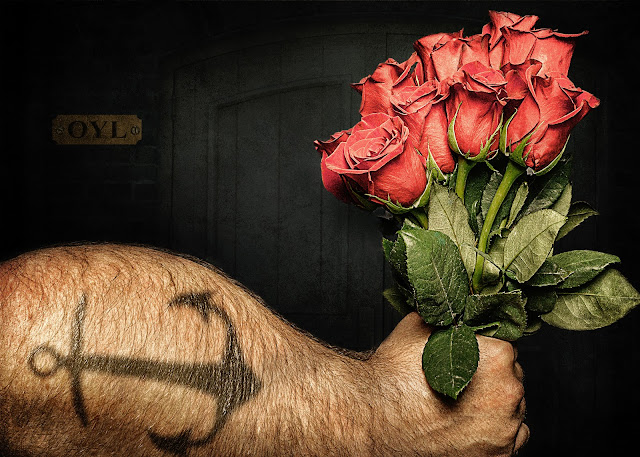 As an aside, it turns out that a Popeye action figure was released during the hunt run, however all things considered I think I prefer this image over one created with a figure.
Posted by Dave DeBaeremaeker at 6:32 PM

Email ThisBlogThis!Share to TwitterShare to FacebookShare to Pinterest
Labels: This series of posts is a deep dive into the images I created for the 25th round of the Photography Scavenger Hunt.

awesome Dave. And I'm sure a certain someone didn't mind some flowers! Who says romance is dead.