This is how I built the world for the word "path."

I came up with the idea for using an Indiana Jones type figure going on a quest and encountering a skull cave right away. Whenever I think path my first thoughts are a path through the woods, which makes me think of either Lord of the Rings, or Indiana Jones.  I own a Kermit the Frog figure dressed as Indiana Jones so the Indiana/LotR choice was made for me.  It was just a matter of building a background to fit.

I started by taking a skull left over from last years Halloween decorations, and making a rock wall to fit it in, all out of XPS foam.  I also used some left over foam bits to make some rocks in the foreground. 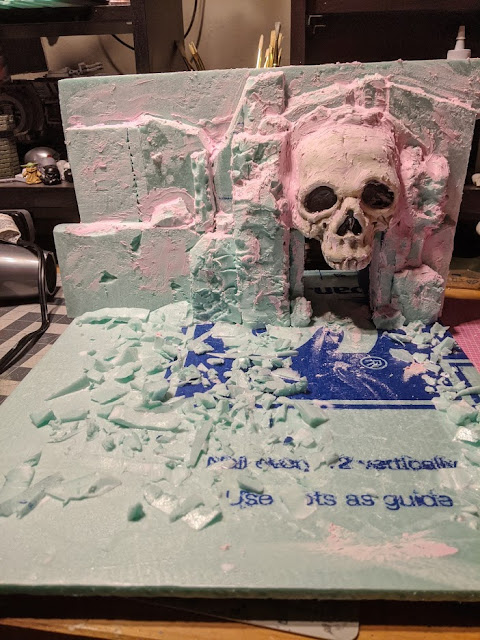 I used some drywall compound to smooth out some of the edges and fill in some gaps. After that it was a simple mater of painting the foam to look like rocks.  I added some extra texture to the path, and made it browner to look more like mud, however thats hard to see in the final image.

I made a map out of muslin, aged with some brown and black inks, then drew on the map elements with a Sharpie.

When I put it all together and set up my camera, I sprayed some Atmospheric Aerosol into the scene to give a foggy mood to it.  The result, straight out of camera, looked like this: 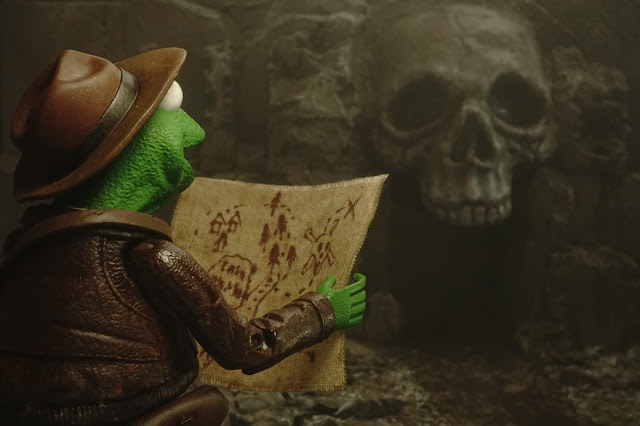 I processed the image after I submitted it. The changes were minimal, mainly some cleanup of dust spots and visible joints on Kermit, as well as some colour adjustments and dodging/burning.  The final looks like this: